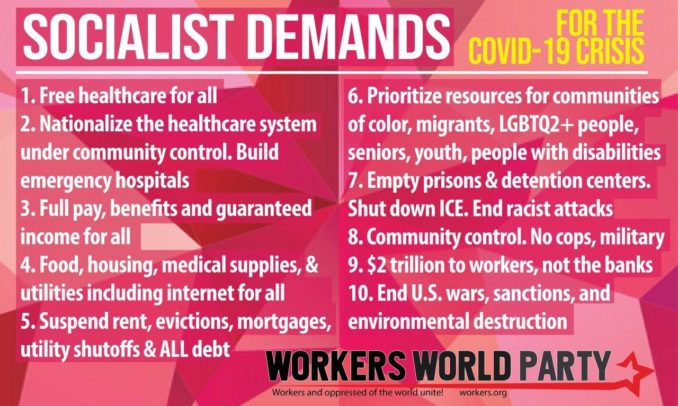 The COVID-19 crisis has led to mass layoffs, putting millions out of work in a country where roughly 80 percent of workers lived paycheck to paycheck even prior to the pandemic. As of May 1, 30 million unemployment claims had been filed, yet the real number of unemployed is likely to be twice that according to a study by the Economic Policy Institute.

Workers are in dire straits, and the situation will get worse. A federal reserve official has predicted a 30 percent unemployment rate. Economists are projecting an economic recession on par with the Great Depression of the 1930s that will take years to recover from — if, indeed, capitalism is even capable of recovering. This is in stark contrast to the “V-shaped recovery” Trump and others have promised as soon as social-distancing measures are eased.

“Worry not,” we are told, “stimulus checks and expanded unemployment will tide you over until everything is back to normal!” Yet how long can workers wait for these payments before they run out of money and fall behind on bills? What of unemployed workers who don’t qualify, especially undocumented workers?

New York’s online and phone unemployment applications immediately overwhelmed the system as millions of workers scrambled to file for benefits. Early in April, the New York Department of Labor said they would begin calling people who were told they had to complete their applications over the phone and that they would reach all applicants within 72 hours. Weeks later, some 200,000 applicants are still waiting for call-backs. Far too many people still wait, with no income and bills piling up, yet New York has already run out of money to pay benefits.

Where will unemployment funding come from?

That $4 billion comprises about 15 percent of total funds allotted for such advances — 22 states were judged to be unlikely to remain solvent in the event of a recession, even one of far less severity than the one we’re headed into. These 22 states include those with the highest number of unemployment claims. Expanded unemployment benefits, which grant an additional $600 per week on top of state benefits, will be suspended by the federal government after July 31.

Given this recession is likely to last years according to bourgeois economists, there is a real and looming possibility that many states will run out of unemployment funds and subsequently deplete the federal funds set aside for advances. Where will the money for benefits come from then? Is it likely that the federal government will conjure up the money out of nothingness, as it did trillions of dollars in a vain attempt to stimulate the stock market? Or will it cut into the trillions of dollars of military spending allotted to the Pentagon, with little to no oversight as to how the funds are used?

More likely, this situation will lead to states prematurely reopening their economies, exposing workers to unnecessary risk with no extra compensation, while pushing them off unemployment if they refuse to risk their lives to return to work. Many businesses will be unable to rehire all the workers they laid off, and some will be unable to reopen at all.

Federal loans to state UTFs are paid back out of payroll taxes. The hiring capacity of businesses will be further limited if borrowing rates are raised to make up the shortfall. If unemployment funds are not guaranteed, it will produce a vicious cycle where workers will not have the money to consume the goods and services produced by other workers, eliminating the need to keep those workers employed.

If states reopen before the rollout of widespread, free testing without providing personal protective equipment and without guaranteeing paid sick leave to those who test positive, the rapid influx of new COVID-19 cases will further overwhelm the capacity of the U.S. health care infrastructure. Aside from increasing fatalities, this will saddle victims with tens of thousands of dollars in medical bills — as many workers have lost or will lose employer-provided health insurance.

Unemployed workers — including those rendered ineligible for stimulus checks and unemployment benefits by their undocumented status — must be guaranteed their basic needs through this crisis, including proper precautions and benefits for essential workers, and indeed, every other demand put forward by Workers World Party for the COVID-19 crisis. Otherwise the suffering inflicted on the working class will be severe in the extreme.

These demands will not be ceded by the ruling class without a fight. Until the working class leverages its productive powers against the capitalist class and their lackeys in the government, the bosses’ response will continue to be directed at insulating capitalists from the repercussions of a crisis they helped create. We have any number of tactics at our disposal: rent strikes, labor strikes, walkouts, sick-outs, boycotts — none of which can be undertaken alone. We must unite and act as a class — in the interests of our class — to build a workers’ world!