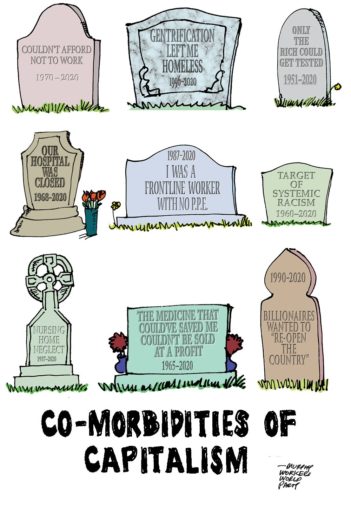 The distribution of government funds in response to the COVID-19 pandemic has torn away any facade of the U.S. as a “democracy,” with equal access to wealth. Even as unemployment, poverty and hunger reach levels not seen since the Great Depression of the 1930s, banks and corporations look to their puppets in Congress and the White House for giveaways far greater than even Trump’s 2017 billionaire tax breaks.

In just five weeks from March 18 to April 22, as nearly 30 million workers lost their jobs, the U.S. billionaire class gained an additional $308 billion from government handouts — a wealth increase of 10.5 percent, according to the Institute for Policy Studies. Some billionaires, including Amazon boss Jeff Bezos and his former spouse MacKenzie Bezos, Zoom founder Eric Yuan, Tesla founder Elon Musk and former Microsoft chief Steve Ballmer saw their net worth surge by over $1 billion each. (Guardian, April 26)

In early April, the federal government passed an economic stimulus package called the Paycheck Protection Program with $349 billion in forgivable loans to help small businesses cover payroll. Now it appears that billions of dollars from this program went directly to major chains or indirectly as fees to banks. Around 150 publicly traded companies received a combined $600 million from this program. It is estimated that banks received over $10 million just for processing these loans.

With national hotel and restaurant chains receiving millions of dollars in grants, the program was basically drained of funds. Genuine “small businesses” saw their loan requests denied because banks either refused or failed to process them. Major companies that received mega-millions include Ruth’s Chris Steak House, a $250 million chain with 150 locations which received $20 million. The Potbelly chain, with over 400 locations valued at $89 million, received $10 million in mid-April.

Off the coast of Miami, the members-only resort Fisher Island, where residents’ incomes average $2.2 million, received $2 million in aid. New York City-headquartered Shake Shack, valued at $1.6 billion, got a $10 million grant, which it subsequently returned after news of it surfaced.

Many of the more than 70 publicly traded corporations, which had little difficulty securing federal funds, got assistance from JPMorgan Chase to secure their loans. A statement from the Wall Street bank acknowledged that its commercial banking unit, serving larger clients, was able to assist in completing the applications. (Washington Post, April 20)

Under CARES, some 43,000 U.S. millionaires, who made too much money to qualify for Trump’s earlier coronavirus $1,200 individual stimulus checks, will instead get an average of $1.6 million each. The act lets owners of businesses taxed on their individual income, rather than corporate income, claim an unlimited amount of deductions against nonbusiness income, including capital gains. (Washington Post, April 27)

But it does not stop there. Now vulture capitalists are holding out their hands for more, this time without any of the strings or limitations contained in previous stimulus legislation.

On April 28, the Federal Reserve, along with the Department of the Treasury, announced an upcoming program to provide billions in “emergency aid” to large U.S. corporations. The Fed is not requiring that companies use the funds to save jobs. It has put no limits on payments to executives or shareholders.

Companies are free to lay off workers and cut wages and benefits, all the while padding executives’ pockets.

Under the plan the Fed will buy up to $500 billion in bonds to cover the debt of large corporations which will be required to pay it back with interest. According to Treasury Secretary Steven Mnuchin, the agreement has congressional approval, even though all previous corporate-bailout coronavirus programs forbid companies from using funds for dividends, while placing limits on executive compensation.

No corporate feeding trough would be complete without energy companies demanding a portion of the slops. With oil and gas prices plummeting due to overproduction and shoddy investments, even before the impact of COVID-19, the Independent Petroleum Association of America wants the Fed to give energy companies their maximum $25 million loans to offset their previously existing debt. (Reuters, April 20)

Oil and gas companies and energy equipment providers, some with close ties to Trump, have already benefited to the tune of $22 million from the “small business” loan program. Prior to the COVID-19 pandemic, taxpayers were already subsidizing energy companies with around $20 billion annually.

In signing an executive order in late April, invoking the Defense Production Act to mandate meat and poultry processing plants stay open, Trump stipulated that plant owners should not be held liable if workers sicken and die on the job. Now Senate Majority Leader Mitch McConnell is following suit, asking that the next COVID-19 stimulus package provide liability protection for U.S. corporations against pending COVID-19-related claims from workers and consumers.

All this comes amid a mounting push by right-wing, neofascist and white supremacist groups to reopen businesses, despite evidence that the limited lifting of stay-at-home restrictions has already caused a spike in COVID-19 cases.

Under threats that refusal to resume work could result in the loss of unemployment benefits that many are still struggling to receive, pressure is also mounting on workers to return to jobs that have proven to be deadly. But will workers submit to this pressure without a fight?

Months of struggle to win concessions from bosses for hazard pay and vital personal protective equipment has shown workers the potential power they hold in their collective hands. Unionized workers have won major concessions. The Transit Workers in New York City fought for and won a guaranteed $500,000 death benefit for families of members who died after contracting the virus on the job. Even non-unionized workers at Amazon, Whole Foods and other major corporations have succeeded in extracting concessions from their employers.

Once the power of the workers is unleashed, there may be no going back.