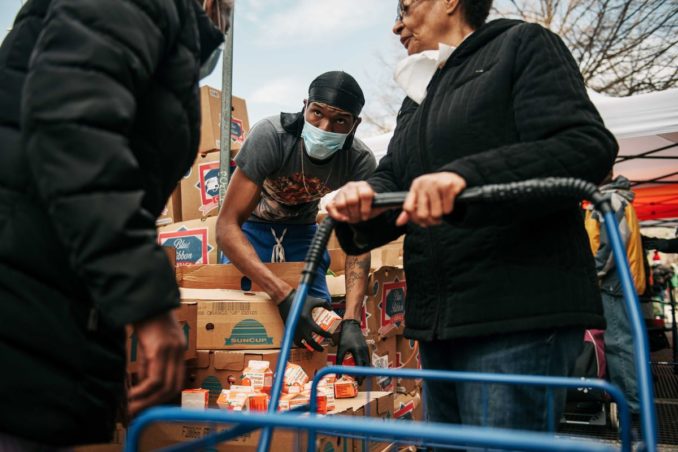 Dairy farmers are dumping millions of gallons of milk into lagoons. Produce farmers are plowing fresh vegetables back into the soil. Billions of dollars worth of food is being destroyed.

This is happening while millions of people are lining up for miles to reach local food banks which cannot meet the enormous demand — made greater by coronavirus-related layoffs of 22 million workers.

Why is this?  Food scarcity does not exist in the U.S. In fact, there is an abundance of food. But many farmers can’t sell to the usual purchasers, such as restaurants, hotels and schools, as many are closed due to the pandemic. The distribution network to those customers has been upended, and thousands of farmers can’t afford to transport food around the country.

If food isn’t purchased, if there aren’t markets, if sales can’t be made and profits realized, food is destroyed — rather than donated to the millions who need it.

Under capitalism, food is a commodity. Like all commodities from cell phones to cars, it is produced to be sold at a profit. If farmers can’t afford to ship food, it’s wasted. And if workers can’t afford to buy what sits on supermarket shelves, they go without unless a food bank, faith-based or community organization, or labor union provides it. This is how capitalism operates.

If stores are buying less food because their customers stay home due to pandemic cautions or can’t afford to buy it as is true of many newly jobless workers — farmers dispose of it. When restaurants, which routinely purchase half of farm produce, aren’t buying, it goes unharvested, unpackaged, untransported — and therefore, unsold.

The pandemic has highlighted the precariousness of life for workers in capitalist U.S., and it has intensified the contradiction between food production and distribution. It has revealed the widespread hunger and malnutrition that existed in the world’s richest country even before COVID-19 arrived — because many people can’t afford food. It’s not grown or manufactured as a public service. Under capitalism, producing and selling this necessity is a means to an end: profits.

Before the pandemic 37 million people here were “food-insufficient,” a fancy term for hungry. About that number received inadequate Supplemental Nutritional Assistance Program benefits. Last year, 40 million people had to rely on food banks and soup kitchens. Low-wage workers, seniors and people with disabilities depend on this assistance.

But then COVID-19 hit: 22 million people were laid off, furloughed or had wages cut. Some 59 percent of workers — disproportionately Black and Latinx — had been living from paycheck to paycheck. Now, many of the newly jobless can’t afford food for their families and have turned to food banks.

News footage showed 10,000 people lined up and waiting for hours at a San Antonio food distribution center. This shocking scene is being repeated throughout the country every day, as demand skyrockets, in some cities by 50 percent. Food bank operators are reluctantly turning away thousands of families in need.

Meanwhile, food banks now have to purchase much of what used to be donated — and at high prices.  Some are spending millions of dollars to transport truckloads of it. Several have had to close just when their help is desperately needed.

However, the federal government should purchase fresh produce from farmers and pay to transport it to food pantries or set up distribution centers. It could hire unemployed workers to drive the trucks and hand out the food — but safely.

Since this is a capitalist country, the rich and their politicians will balk at this, as they prioritize profit-making, not human needs. Even now with the unemployment crisis, the U.S. Department of Agriculture refused to use disaster powers to expand eligibility for food stamps.

A people’s struggle won food stamp benefits in the first place.  That is what it will take for people to get what they need, whether it’s food, housing, health care, jobs at a liveable wage or safe working conditions.

The Food Is a Right Campaign, stemming from the All Peoples Congress, backed by Workers World Party, launched a struggle in 1982 to push the government to open its warehouses of “surplus” food.  It sued the Reagan administration and organized many protests. Soon after the lawsuit was lost, this grassroots movement  won the release of tons of food.

In socialist Cuba, food production and distribution are highly organized. Food is never wasted. The needs of the people always come first.