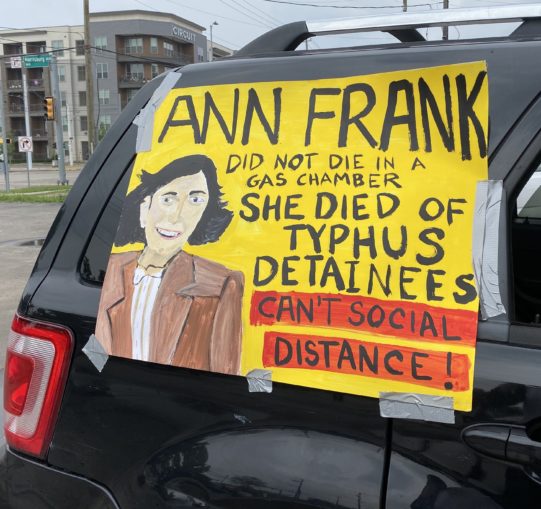 Across the state of Texas on April 19, social distancing protests in the form of car caravans circled detention centers and Immigration and Customs Enforcement  offices demanding the release of all migrants in custody. The violent borders that allow for migrants and refugees to be detained in the first place was and is a crime against humanity. Additionally, in the face of a global pandemic, those kept in cages have a high risk of the coronavirus spreading quickly and are unable to take even the most basic measures to protect themselves.

Members of Never Again Action, along with RAICES, FIRE (Fight for Im/migrants and Refugees Everywhere), Rise Up, About Face, Grassroots Leadership, Workers World Party, Party for Socialism and Liberation, the Autonomous Brown Berets de San Antonio, Refuse Fascism and Democratic Socialists of America attended in multiple cities. Protests took place across Texas in Austin, San Antonio, Dallas, Corpus Christi and Houston, with central demands of “Free them all” and “Close the camps.”

Demonstrators from the Austin area met at a location near the city center where they placed signs on vehicles while remaining socially distant. Then the caravan of 50 cars drove to the T. Don Hutto “Residential Center” in Taylor, Texas. This facility is owned and operated by the private company CoreCivic, formerly known as Corrections Corporation of America.

In San Antonio, “Chinga la Migra,” “Melt ICE” and “Set Them Free” were some of the slogans painted on windshields or taped to the sides of more than 40 cars participating in the action against migrant detentions. Honoring COVID-19 pandemic isolation guidelines, Workers World Party members from San Antonio and other cities stayed in their autos as they joined the caravan. They demanded the release of ICE detainees, honking their horns and circling the San Antonio ICE office at 1777 NE Interstate 410 Loop.

Gloria Rubac, representing FIRE, set the scene in Houston at 419 Emancipation Ave., where the private company Southwest Key owns and operates a center for children separated from their families. “As a raucous car caravan circled around a downtown center for migrant children today,” she said, “I was excited to see around 20 cars with signs, flags and banners on them. This health crisis certainly affects migrants, either in detention or waiting on the border, more than most populations. Solidarity in any form we can initiate is important. Trump and the politicians who see migrants as expendable are racist and criminal. This support today is one small step in a struggle for im/migrants and refugees. We must keep the heat on.”

Whether owned and operated by private companies or run by ICE, these centers are making a few folks rich at the cost of many migrants’ misery. Those locked up face potential death sentences from the deadly virus, with little to no protections. This moment calls on everyone to ensure that mass extermination of vulnerable populations never happens again.