Since the beginning of March, workers have held over 100 walkouts, sick-outs, sit-ins, pickets and protests over their bosses’ failure to protect them from the highly contagious coronavirus. Common demands include adequate personal protective equipment, modifications to the work environment, hazard pay, paid sick leave and the shutdown of nonessential jobs such as casino construction and vehicle assembly. 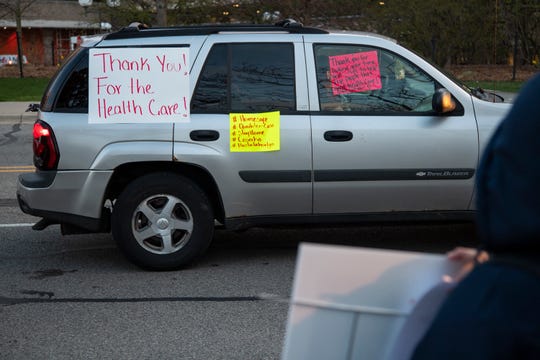 The most recent actions have hit fast food restaurants, poultry and meatpacking plants, high-rise apartment buildings, assisted living housing, city sanitation departments, shipyards, bookstores, warehouses, hospitals, pizza parlors and supermarkets. The six weeks of workplace resistance have occurred in most of the 50 states and Washington, D.C. Strikes have been large and small — from a handful of workers at five New Jersey high-rises to 13,000 carpenters across Massachusetts.

From hospitals to grocery chains, food processing to mass transit, workers deemed “essential” are in the forefront of this emerging class struggle. They are being asked repeatedly to choose between their livelihoods and their health, while they watch their coworkers die.

Fatality figures tell it all: Four workers dead at a Tyson chicken plant in Georgia, 50 New York City transit workers, 42 grocery workers and 27 health care workers around the country, and on and on. By the time this article is published those numbers — a small sample and likely a shocking undercount — will be out of date.

The meatpacking industry’s disregard for workers, who are forced to toil in cramped conditions without protective equipment — as they did before the outbreak — has made these workers especially vulnerable to exposure. In southeastern Iowa, at least 186 workers have tested positive for COVID-19 at the Tyson Foods pork processing plant in Columbus Junction, resulting in two deaths. The Columbus Junction plant has been shut down, but the company does not plan to close the Tyson Fresh Meats plant in Waterloo, showing Tyson’s policy of putting profits over workers’ safety.

As reported by The Waterloo-Cedar Falls Courier April 16, “Hundreds of Tyson employees in Waterloo have refused to work in recent days,” as “the company is not protecting workers from coronavirus spread.” Calls for Tyson worker walkouts and consumer boycotts are growing louder as the number of COVID-19 cases continues to escalate statewide and around the country.

These workers — mostly low-wage workers — have formed the vanguard of the “$15 and a union” movement. Now they are on the frontlines in the life-and-death struggle for workplace safety.

They have millions of potential allies, from the 22 million newly laid-off workers to the 2.3 million workers behind bars — who are also rebelling — to the 1.3 million “workers in uniform” in the military.

Slogans such as the tried-and-true standard “People before profits” have reemerged along with a new modification: “PPE before profits.” The capitalist drive for profit is behind the widespread shortages of PPE and the failure of employers throughout the capitalist economy to provide basic safety. The working class is revolting over the bosses’ insistence that they work unsafely.

The capitalists can’t tolerate these challenges to their authority and are firing workers and their leaders in retaliation. Amazon, whose CEO Jeff Bezos is the world’s richest person, fired leader Chris Smalls for organizing a walkout at the company’s Staten Island warehouse. When more walkouts followed, Amazon fired three more organizers.

A subcontractor operating in a Michigan General Motors plant fired Travis Watkins for warning workers on Facebook their jobs were unsafe. Nurses in Santa Monica, Calif., and Voorhees, N.J., have been disciplined for refusing to work without an N95 mask while taking care of COVID-19 patients. Nearly 10,000 health care workers across the country have tested positive, according to the Centers for Disease Control and Prevention.

But as the 100-plus job actions demonstrate, workers will risk their jobs when their lives are at stake.

Strike all at once!

The phrase “rolling general strike” was used to describe the situation in Detroit in February-March 1937 when there was not one big general strike, but multiple sit-downs every single day. Altogether there were 4,700 strikes in the U.S. that year.

The class struggle is not at that stage yet. But with over 100 strikes in six weeks and no sign of ebbing, it is starting to look like a rolling general strike. Imagine if all these courageous workers — and many more facing danger on the job — all walked out on the same day!

If Trump has his way, millions of workers will be forced back to work on May 1 while they are worried about still unsafe working conditions. May 1 — May Day — is also International Workers Day, traditionally a day of strikes around the world. In that spirit, a broad coalition of worker and community organizations has called for a general strike on May 1.

The call, posted April 1 by Cooperation Jackson, reads in part:

“We should take inspiration in that we are not alone in calling for and acting upon a call for a general strike. Workers throughout the country and the world are spontaneously taking matters into their own hands. Autoworkers, chicken factory workers, nurses, drivers, grocery store workers and more are all taking independent action. Calls for a rent strike are going viral, as working poor and homeless workers are starting to occupy hundreds of vacant homes to meet their needs and practice the necessary social distancing to ensure their survival. Things are in motion and we need to build upon this momentum, quickly.

“This crisis changes everything.

“We have an opportunity to take control now, and we are ready to fight for a society in which all people can live with full autonomy without having to worry about survival.”

Mike Kuhlenbeck contributed to this article.