Amidst the unending stream of grim news flowing from the COVID crisis, a new disturbing image has emerged over the past week: the sight of Trump supporters congregating in large, potentially infectious, groups to protest in states all over the nation. In flagrant contravention of stay-at-home orders, public safety, common sense and good taste, hundreds of protesters have flocked to state capitals decked in red, white, and blue to challenge government precautionary measures. 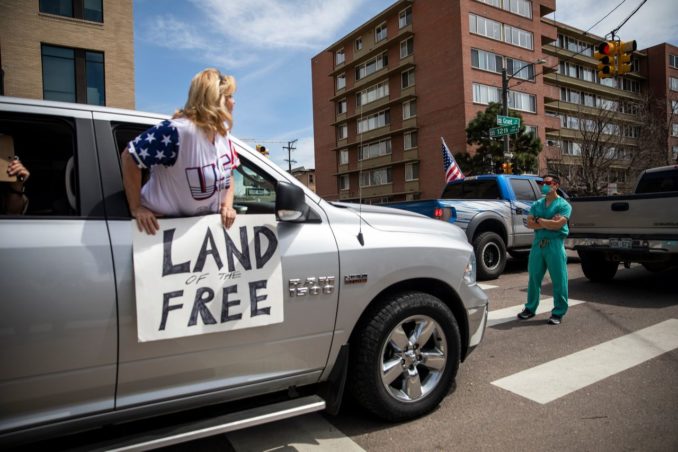 It’s difficult to understand why people would risk their lives — and the lives of their loved ones — to attend a demonstration like this. In order to provide clarity, we must look at the major capitalist backers behind this outbreak of right-wing dissent.

The protests are centered primarily in the Midwest, but they have spread throughout the country. There have been demonstrations in Lansing, Mich.; Cincinnati, Ohio; Austin, Texas; and Oklahoma City. These protests look much like Trump rallies: mostly white demonstrators waving U.S. and Confederate flags, wearing MAGA hats and cheering for Trump.

More threatening is the presence of armed right-wing militias, as well as contingents from the fascist Proud Boys. Just as with the 2016 election, and the Tea Party movement before that, there seems to be an outpouring of right-wing racist rage.

These rightists have assembled to demand the lifting of stay-at-home orders. Some claim that the COVID-19 crisis is exaggerated or even a total fabrication. Others simply want safety measures to be loosened. All the demonstrators have echoed the refrain that they want to “get the economy started.” They argue that preventing workers from engaging in wage labor is an infringement on individual freedom.

A war within the ruling class

That section of the capitalist corporate media that opposes the president has portrayed these demonstrations as the irrational outbursts of rabid Trump supporters, fueled by the president’s incendiary rhetoric. But what is obscured by this star-spangled spectacle is that these protests are part of a larger proxy war between two factions of the capitalist ruling class.

On one end, there are the neoliberals — most associated with the Democratic Party — who would hide the iron fist of capitalism within the velvet glove of empty rhetoric. On the other, are the Randian free marketers — nihilists who understand that capitalism is destroying our society and our biosphere, or those who ignore those threats — and who seek to extract every last drop of profit they can before the inevitable collapse.

The neoliberal faction is best exemplified by New York Gov. Andrew Cuomo, who has been lionized by liberals and the anti-Trump wing of the capitalist press for his supposed leadership in this time of crisis. What is less remarked upon is that Gov. Cuomo has frequently insinuated during his daily briefings that he too is anxious to restart the economy. These regular comments are trial balloons — albeit more subtle than Trump’s — meant to prepare the public for a re-opening of society before the recommendations of medical professionals.

Cuomo’s compassionate, often substance-free oratory also distracts from his ruthless policies. In spite of the massive health care crisis, Cuomo cut $2.5 billion from the state’s Medicaid program. He likewise has expressed no interest in providing financial support to undocumented im/migrants affected by the crisis.

The working class has no refuge from neoliberal technocrats like Cuomo elsewhere. Just as the gazelle, fleeing from lions on the savannah, soon finds itself in crocodile-infested waters, so too is the working class faced with vicious right-wing ideologues like Trump and Florida Gov. Ron DeSantis. In callous indifference to public safety, DeSantis re-opened public beaches last week, causing a spike in crowds (and quite likely infections).

Neither ruling-class faction puts the interests of the working class first. Both serve their capitalist paymasters. These policymakers only reflect the interests of their respective capitalist backers, and some of those backers are becoming extremely anxious as the economy slowly grinds to a halt. This more desperate and ruthless wing of the capitalist class, dissatisfied with the slow progress of right-wing politicians, has opened the door to fascists gangs — as they historically always have — to advance their agenda.

There is no better example of the moneyed hand behind fascism than Trump’s informal economic advisor Stephen Moore. The obsequious, sycophantic Moore has been behind some of the worst “free market” super pacs of the last 20 years, tirelessly working to dismantle environmental regulations, remove workers’ protections and cut taxes for the ultra wealthy.

Moore, a parasite’s parasite, has latched onto extreme fringe Republican campaigns in an effort to drag the party into the right-wing abyss. His comments comparing the recent pro-Trump protests to Rosa Parks (along with his decades-old comments denigrating women) show that he revels in revolting. He’s a perfect fellow traveller for the fascist goons whom he supports.

Moore, who recently promoted an upcoming Wisconsin protest on a Libertarian think tank’s YouTube video, serves on Trump’s council for restarting the economy. His desire to sacrifice workers and his connections to these demonstrations are apparent.

But Moore is no solitary puppet master. There is a veritable Legion of Doom providing organizational support for these right-wing protests. The Idaho Freedom Foundation, which has planned protests for Boise, was founded with grants from the ultraconservative heirs of the Coors brewing family as well as from Charles Koch. Another backer is the Michigan Freedom Fund, led by Greg McNeilly, a former advisor for the failed gubernatorial campaign of Dick DeVos, spouse of Trump’s Secretary of Education Betsy DeVos.

The image that begins to form is of a web of right-wing millionaires and billionaires who, as they did during Trump’s 2016 campaign and the Tea Party protests of 2009, are creating an astroturfing movement of angry white small business owners fearful of falling back into the working class. This sector is now buttressed by a core of fully radicalized fascists — to create panic and push for an agenda that benefits the ultra-rich to the detriment of everyone else.