The following excerpted remarks were made by Gloria Rubac, a longtime Texas anti-death penalty activist, on an April 9 Workers World Party webinar entitled “Free them all”.  Go to tinyurl.com/y993k6rj to hear all the talks.

Why do we say FREE THEM ALL!

Who’s in prison and where do these prisons come from? Prisons came about after the Civil War, after the end of slavery.

Here in a Houston suburb called Sugar Land, 95 graves were found last year as a new school was being built. This city had been home to large sugar plantations during slavery. Some of the remains still had chains on them of people who had been leased convicts.

So we say FREE THEM ALL, because every single person who is in prison is a political prisoner. Why? They are victims of this political and economic system. 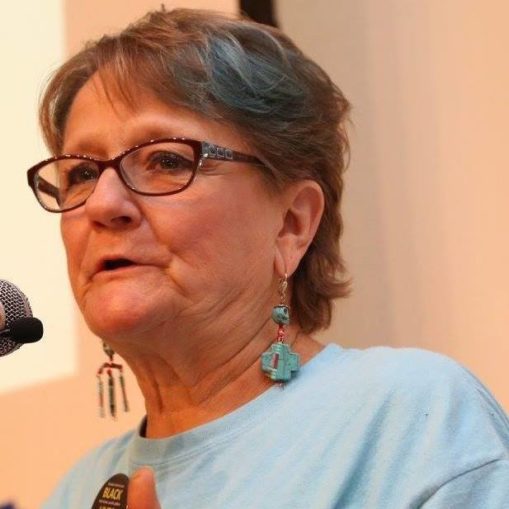 Who should be in prison? The head of Tyson Foods should be in prison. He told an older Black woman worker at one of their chicken-processing businesses who was very sick, to come back to work. She is now dead, as are two of her coworkers.

The Tyson Foods executives should be in prison for murder.

The head of Baylor St. Luke’s Medical Center in Houston should be in prison. My daughter, a registered nurse, is working there in the ICU, but she doesn’t have an N95 mask and has worn the same cotton mask for two days. I can go on Amazon to buy a mask. Why in the hell can’t this major hospital get proper masks?

The executives of McDonald’s or Kroger grocery stores should be in prison. They don’t supply personal protection equipment for their workers — essential workers.

The military generals and the warmongers should be in prison. They are responsible for mass murder all over the world. Talk about serial killers! And if they do not kill our youth, who they send to fight their imperialist wars, these youth come back so mentally and physically damaged that it affects them for the rest of their lives.

And what about the border patrol, the ICE (Immigration and Customs Enforcement) agents, those who separate parents from their children? That is child abuse raised to the extreme.

Right now in Texas, there are 15 to 20 prisons already on lockdown because guards and prisoners have COVID-19. These prisons are becoming death camps.

I want to read from a letter from comrade Nanon Williams, a man who was innocent yet sent to death row, after being arrested when he was only 17 years old. Nanon’s sentence was commuted to life.

‘They need to let us out’

“When we do get to go outside, we are being shook down by guards, meaning we are strip searched, and the guards are wearing the same gloves as they strip search each prisoner. We do not know what they are passing on to everybody. When we go to chow, they take an entire cell block, not small groups. The dishwasher machine is broken, and they only have a couple of hundred trays, so four or five prisoners have already eaten off the same dirty tray that’s being refilled. There’s one pitcher of water or juice on each table for four that sits there for all the shifts of prisoners who come to that same table. When they’re patting us down going into the chow hall, guards are using the same gloves on each prisoner, and some are not even wearing gloves at all.

“When they take us to shower, there’s room for 80 men, but they’re taking at least a hundred at a time. Who knows what that water is spraying on us. And to answer your question: NO! We don’t have bleach. There’s nothing to clean our own living areas. And lastly, the stress and fear are causing severe problems, especially for the mentally ill who are locked down and hearing about this virus. They don’t understand what’s going on. They are getting into fights, and it is really bad.

“I think we need something revolutionary to happen, rather than keeping us locked up. They need to let us out! Put us on monitors if they want, but this virus is going to spread over every prison system.”

The real criminals are not in prison. Prisons are concentration camps for the poor and oppressed. In Houston’s county jail, there’re 9,000 prisoners, the largest facility for the mentally ill in town. And most of those in the county jails have not even been convicted of any crime, haven’t gone to trial yet. They are locked up because they are too poor to get out on bail. This is criminal, and the people who are responsible for this are criminals.

Open up the jails, the prisons, the detention centers. Let’s lock up the real criminals!