As of April 18,  according to the African Centers for Disease Control, there were 21,990 cases of COVID-19 in Africa, with no country having more than 3,000 confirmed cases.

Africa is home to 1.3 billion people. Many of the 52 countries that make up the African Union are small, impoverished, economically underdeveloped, and they are still confronting the neocolonialism of their former colonial overlords and resisting the advances of U.S. imperialism, which seeks unfettered access to Africa’s vast riches. 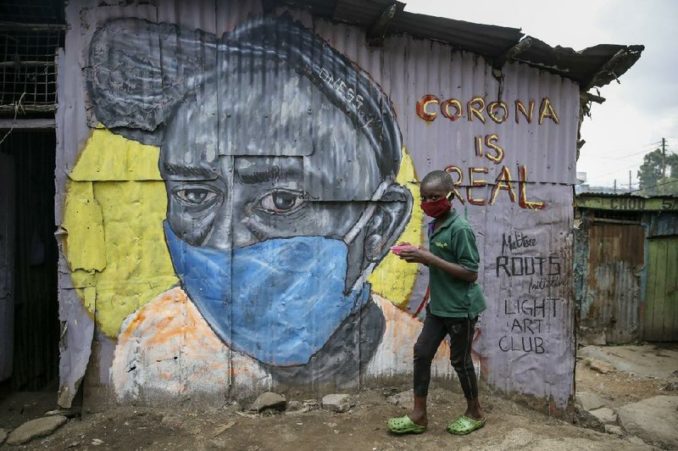 An informational mural by youth artists warning about the risk of the coronavirus in the Mathare slum of Nairobi, Kenya.

Nigeria, with nearly 214 million people, and South Africa, with nearly 58 million, are its most developed countries. Sixty percent of the people living in Africa are under 25. About 70 percent of Africa’s working class are in the informal sector.

Infectious diseases like malaria, polio, Ebola, measles, AIDS and tuberculosis are episodically epidemic in Africa. There was an Ebola outbreak in West Africa during the years 2014-16 that infected over 28,000 people, of whom 11,000 died.

Based on the need for coordinated public health measures required to mitigate, contain and then end the Ebola outbreak, the African Union established the African Centers for Disease Control and Prevention in 2017. The mandate given to the ACDC was to become a continental entity for disease prevention, surveillance and response.

The first major step the ACDC took in 2017 was to establish a formal working relationship with the World Health Organization to coordinate their efforts. The director of the ACDC was designated as a WHO special envoy.

How they work together can be seen in the weekly webinars that the ACDC has been running. The webinars for doctors and nurses concentrate on how to diagnose, manage and treat COVID-19 patients, and they feature practical advice on how to overcome the problems produced by extreme poverty. WHO specialists point out that it is possible to contain and mitigate COVID-19.

For example, in Sudan, where many families can’t afford to buy the soap and water needed to wash your hands, 20 portable handwashing facilities are now accessible in seven locations in the Sudanese capital as part of the emergency response to COVID-19. Kigali, capital of Rwanda, has a similar program, and since the ACDC has promoted this idea, it is likely to spread further.

Along with the youthfulness of its population, Africa’s deep poverty is going to play a major role in its response to COVID-19.

There are approximately 2,000 ventilators in Africa for its 1.3 billion people. Somalia’s health ministry still doesn’t have a single one. The Central African Republic has three. South Sudan, four. Liberia, five. Nigeria, with a population two-thirds that of the United States, has fewer than 100. Ten African countries have none. For comparison, the United States has 170,000 ventilators — and needs more — for 330 million people.

While ventilators can play a role in saving the sickest patients, supplies of oxygen, tubes and personal protective equipment are also essential.

U.S. withdrawal from WHO

Dr. Matshidiso Moeti, director for WHO’s Africa region, sees both a financial and political aspect to President Trump’s suspension of funds the United States gives to WHO, which amount to 15 percent of its budget.

Moeti spoke to a media conference on COVID-19 in Africa, which was covered by Reuters News on April 16. WHO in Africa, according to Moeti, is not only working to improve patient care and reduce fatalities for COVID-19 patients, it is also working on other killers like polio, AIDS and malaria. “The impact, potentially, of this decision will be quite significant on areas such as polio eradication,” she said, just when Africa was close to being declared polio-free.

China, in the midst of its hard but successful fight against the epidemic domestically, has sent planeloads of essential supplies to almost all the members of the AU, some being financed by China’s Jack Ma Foundation. Chinese Foreign Minister Wang Yi has promised to continue to provide materials that Africa needs, to share its antipandemic experience and to send medical experts.

Cuba, which has been under U.S. sanctions for over 60 years, recently sent a contingent of 250 medical practitioners, mainly doctors, to Angola, a country whose connection to Cuba matured in their common armed struggle against the racist apartheid regime then ruling South Africa in the 1970s and 1980s.

WHO Director-General Tedros Ghebreyesus has organized solidarity flights from Addis Ababa, Ethiopia, to distribute essential medical supplies. The flights are  a joint initiative of the AU, the U.N. Food and Agriculture Organization and  WHO. The governments of the United Arab Emirates and Ethiopia finance the flights.

If the Trump administration had not cut funds to WHO in an attempt to find a scapegoat for his own disastrous errors, this international solidarity would be saving even more lives.