When a Pennsylvania Department of Corrections spokesperson callously claimed that Mumia Abu-Jamal was being hospitalized with COVID-19 at 5 p.m. on April 15, the news was shared worldwide in minutes. Supporters, who have been misled by DOC statements in the past, immediately flooded the institution with calls demanding confirmation from Abu-Jamal himself. 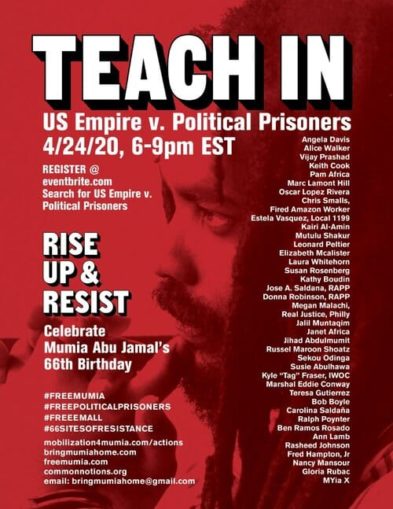 By 8:45 p.m., bowing to pressure, the DOC allowed Mumia to call supporters. He confirmed that the official report was false. “I am fine, I am not hospitalized,” he reported. “What I need is freedom.”

This racist and cruel hoax appears to be the prison’s response to a day-long twitter storm and phone call blast to Pennsylvania state and prison officials demanding the release of Abu-Jamal and all state prisoners. The COVID-19 pandemic imposes a death sentence on the incarcerated, including 66-year-old Mumia, who already suffers from cirrhosis of the liver.

On the morning of April 16, Abu-Jamal supporters held a virtual press conference where they went into detail on the actions of the DOC spokesperson and its impact on family, friends and supporters of Abu-Jamal.

Santiago Alvarez, a University of California Santa Cruz student who called the prison, described the recorded conversation he had with the DOC spokesperson and played a portion of it. The person clearly told Alvarez: “Mumia was taken to the hospital 30 minutes ago … suffering from headaches and breathing problems … to be tested for COVID-19 as a precaution.” The speaker identified themselves as “Philip Howard.”

On Alvarez’s second call to the prison, the person who answered the phone said, “No one has left here today” and “Abu-Jamal was still in his cell.” From the recordings it seemed clear that the same individual answered both calls despite giving a different name when prompted and claiming that he had no idea “who the hell Philip Howard is.”

Johanna Fernandez, with the Campaign to Bring Mumia Home, stated, “It is time to release the people who sit at ground zero for COVID-19. Release all prisoners who are immunocompromised. There are over 700,000 prisoners across the U.S. suffering from hepatitis C. These people are being sentenced to death as we speak.” Fernandez stated that the prison official’s callous misinformation, which was recorded, should lead to disciplinary procedures and his firing.

Delbert Africa, recently released MOVE 9 member, recounted how these “racist, sadistic guards and staff did the same thing to me, denying I was sick, denying I was hospitalized,” misleading his friends and family when he was actually very ill in prison. Calling for the release of Mumia, Russell Maroon Shoatz, Mutulu Shakur, Jalil Muntaqim and other political prisoners, he complimented the solidarity movement for forcing the DOC to take Mumia from his cell to make the call confirming his condition — a very unusual step.

Temple professor and activist Marc Lamont Hill called the prison spokesperson’s actions “shocking — a stunning level of cruelty and indifference.” Hill reported that as of April 3, while the COVID-19 infection rate in New York City, the highest in the U.S., was 6.48 per thousand, the infection rate at Rikers Island prison was 54.05 per thousand. “Every incarcerated person is in danger. You can’t have social distancing in prisons.”

Megan Malachi, with Philly REAL (Racial, Economic and Legal) Justice, and longtime Abu-Jamal activist Dr. Suzanne Ross also spoke. Malachi stated: “The false statement issued by the prison in the middle of a global pandemic is yet another example of the inherent violence of mass incarceration.”

Ross recounted how the global movement forced the state DOC to make hepatitis C medication available to Mumia and other prisoners just a few years earlier.

Abu-Jamal supporters have planned a series of events marking his 66th birthday from April 23 to 26, including a virtual press conference on April 23; a Webinar/Teach-In on April 24; “Mumia Libre, an Instagram Live Dance Party” on April 25; and “Poetry in Motion, a noon-to-midnight reading of Abu-Jamal’s works” on April 26. For more information and details, visit mobilization4mumia.com/new-events or facebook.com/cbmhome/.