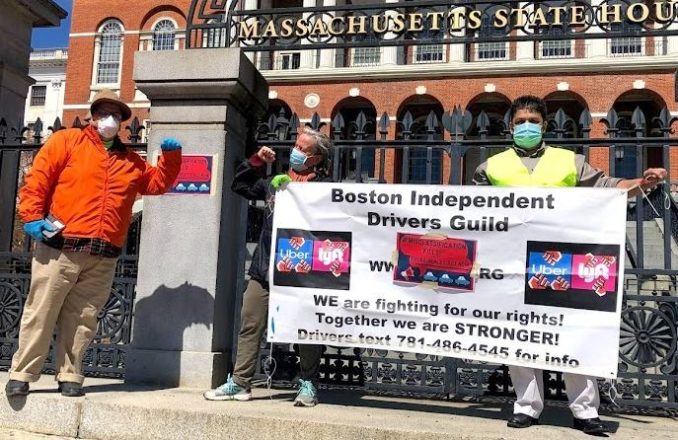 The rally launched a miles-long caravan of drivers and supporters that encircled the Massachusetts State House. Organized by the Boston Independent Drivers Guild, the action demanded an immediate end to the misclassification by TNC of millions of workers as “independent contractors,” who would traditionally be ineligible for unemployment benefits.

While Uber and Lyft have continued to make billions off the labor of the frontline workers, these global capitalist high-tech corporations haven’t spent a dime on personal protective equipment, sick pay or hazard pay for the drivers, many of whom have become sick or are under quarantine.

Mutwaly Hamid, a Sudanese leader of BIDG, opened the rally by exposing the big lie of Uber’s claim to offer “flexibility” to “independent contractors.” He said, “Flexibility does not mean choosing between deadly working conditions and paying rent or cutting down the rates whenever the bosses want and – whatever they want to do to drivers.  Drivers have control of our own destiny. The only way to win real flexibility for drivers is to come together and organize a powerful drivers’ union!”

Other union members joined the rally in solidarity. Merrie Najimy, president of the Massachusetts Teachers Association, addressed the rally, saying, “We have to be physically distancing but we have to be socially connected. We live in an economic system that is designed — it is built to prey on workers. It is built to use maximum extraction of our labor.” (tinyurl.com/uxrwf2k/)

Sign the BIDG petition to Massachusetts Government for Emergency COVID-19 Unemployment and other worker benefits at tinyurl.com/stt85ha/.