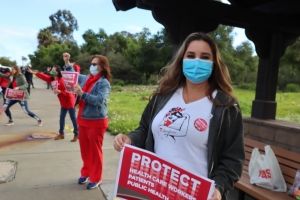 Health care workers protest April 13 after more than 200, including registered nurses and caregivers, were laid off by Palomar Health in Poway, Calif.

These workers are being justifiably lauded as the frontline of defense in a global pandemic. But rather than thanks, health care workers face hardships as administrators, investors and stockholders look first at the bottom line of profit.

Altarum, which describes itself as a nonprofit research firm for vulnerable and publicly insured populations, provided a detailed study of the job loss and pay cuts. It reports that in past economic recessions, jobs in health care grew. Not this time.

More than 43,000 health care workers lost their jobs in March. More drastic cuts in hours and pay are expected in April and moving forward.

Trinity Health Mid-Atlantic, a Catholic nonprofit hospital chain which employs 125,000 workers in 92 hospitals and hundreds of continuing care centers in 22 states, is making drastic cuts in staff and shortening hours and pay. The pay cuts range from 20 percent to 70 percent.

The cancelation of all elective surgeries during the pandemic is what is impacting hospital bottom lines. Mary Dale Peterson, president of the American Society of Anesthesiologists, defined the problem: “Elective surgeries are the lifeblood of many hospitals, if not all hospitals. They account for 50 to 60 percent of profits for most.” (abcnews.go.com, April 12)

In a global health crisis, even in the hardest hit areas, medical centers are downsizing. Health care workers who are trained to fight COVID-19 are having trouble finding steady employment. Hundreds of hospitals are expected to close after the crisis.

Even more serious layoffs are ahead. A report by HealthLandscape and the American Academy of Family Physicians estimated that 60,000 family practices will close or significantly scale back by June, and 800,000 of their employees will be laid off or have hours sharply reduced. The across-the-board cuts include nurses, doctors, medical assistants and janitors. (USA Today, April 2)

An April 6 New York Times article, “During a Pandemic, an Unanticipated Problem: Out-of-Work Health Workers,” summarized the contradiction this way: “As hospitals across the country brace for an onslaught of coronavirus patients, doctors, nurses and other health care workers — even in emerging hot spots — are being furloughed, reassigned or told they must take pay cuts.

“The job cuts, which stretch from Massachusetts to Nevada, are a new and possibly urgent problem for a business-oriented health care system whose hospitals must earn revenue even in a national crisis.”

This crisis of vast layoffs and staff cuts in the time of greatest need is because medical care in the U.S. operates strictly within the framework of the capitalist system. Every institution, even so-called nonprofit institutions, operate on the basis of maximizing profits and ruthlessly cutting losses in order to survive.

The health care system of huge hospital conglomerates operates on tight margins, keeping the smallest possible inventories in stock. That meant hospital systems were incapable of ordering inexpensive personal protective equipment, supplies and essential medicines in advance to plan for the pandemic emergency.

The drive for profit underlying every supplier, every company involved in health care, means that the U.S. today has the most expensive and least accessible health services in the world.

Medical care faces the same insurmountable, artificial constraints as food production. There are giant surpluses of food in the U.S., including milk, grains, vegetables and fruit. But food is left to rot in fields, plowed up or put down the drain when it can’t be sold at a profit. Yet 40 million people in this country are categorized as “food insecure,” and food banks face lines of desperate people.

A capitalist crisis brings every ugly contradiction in class society into stark view.