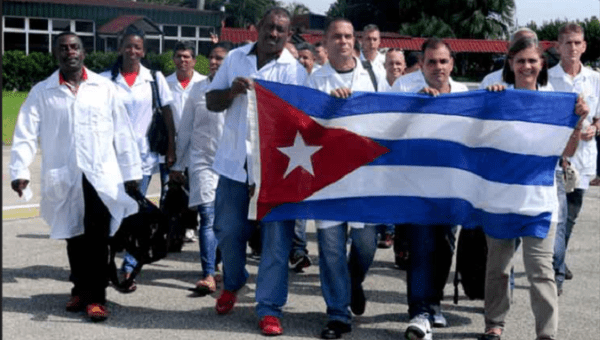 Cuban doctors arrive in the Lombardy region of Italy March 23 to fight the COVID-19 pandemic.

What country can always be counted on to show international solidarity and provide concrete aid in a crisis? The people of the world know that it is socialist Cuba. It has shown the world what solidarity means, sending multiple medical teams around the globe to help in humanitarian crises. This is as true now, during the coronavirus pandemic, as ever. Cuban doctors are currently in 59 countries.

Italy’s Communist Party expressed gratitude to First Secretary of the Communist Party of Cuba Raul Castro and President of the Republic Miguel Diaz-Canel for sending a delegation of doctors to Lombardy which has been hit hard by COVID-19 and for cooperating with Italy’s public health system. (Granma, April 6) According to Johns Hopkins University, 162,488 people in Italy have been stricken with the disease and 21,067 had died as of April 14.

Because of “years of cuts in public health allocation, [Italy’s] health system is in great difficulty, despite the selflessness and relentless work of our doctors and health workers in the trenches, fighting the coronavirus today,” said the Italian CP’s message. It thanked Cuba, “a small island subjected for many years to a total economic blockade by the world’s greatest power [while] providing a great lesson in solidarity and humanity.”

The letter continued: “Your doctors have cured the sick in 64 countries. Thanks to the teachings of Commandante Fidel, they testify to the value and superiority of socialist society.” It concluded: “For 60 years you have been an example and an invaluable resource for all peoples of the world.” Furthermore, Cuban doctors’ presence in Italy demonstrates that “capitalism provides what is superfluous, while socialism provides what is necessary.”

Some 52 Cuban doctors and nurses have been working collaboratively in Crema, Lombardy, “to expedite the recovery of COVID-19 patients with complications.” (Telesur, April 7)

In a precedent-setting move, Cuba organized medical brigades within a week’s time to travel to 14 countries to combat the virus. Cuba’s Vice Minister of Public Health for Collaboration, International Relations and Information Marcia Cobas, said April 3 that several delegations of the Henry Reeve International Medical Brigade had already left the country, with the first stop in Venezuela.

Socialist collaboration and cooperation enabled the quick mobilization of the teams. Cobas said Cuba, with 89,000 doctors and 84,000 nurses, has the highest ratio of doctors in the world — 9 per 1,000 residents — which is three times the U.S. rate! That is why the island can send health workers abroad. It has also sent materials and treatments.

Many Caribbean countries have expressed gratitude to Cuba’s health workers for aiding them in the war against this rampaging pandemic. When a medical delegation arrived in Saint Vincent and the Grenadines, Premier Ralph Gonsalves, supporter of the Cuban Revolution, expressed gratitude to “the Cuba of Raul and Fidel” and President Diaz-Canel. The teams were also warmly greeted in Antigua, Barbuda and Jamaica. Others went to St. Lucia and throughout Latin America.

Cuban doctors already stationed in Haiti on other assignments, who had been ready to return home, stayed to help a newly arriving delegation of 348 doctors and other health workers. Minister of Health Marie Greta Roy Clement welcomed the “Cuban friends,” recalling their critical assistance after a massive earthquake in 2010, during a cholera epidemic brought by U.N. “peacekeepers” in October of that year, and after the deadly Hurricane Matthew in 2016.

Haiti, the poorest country in the Western Hemisphere, has endured the horrific oppressions of slavery, colonialism and imperialism. The country “now faces a looming pandemic, with an almost nonexistent public health care system and a dysfunctional political system rooted in neocolonial intervention.” (Haiti Liberté, March 30)

For the first time, a Cuban medical brigade of 101 nurses, most of them women led by Dr. Daimarelis Ortega Rodriguez, went to Barbados.

Socialist Cuba has had a special relationship with several African countries. From the 1960s through the 1980s, thousands of its soldiers fought alongside anticolonial liberation movements in southern Africa.

Cuba was the first country to heed the urgent calls of West African governments during the Ebola epidemic in 2014, sending 461 doctors and nurses to help their health care workers. The wealthy imperialist U.S. and Western European countries sat on the fence, hesitant and unwilling to get involved.

Some 256 Cuban health workers, including 188 physicians and 24 nurses, arrived in Angola on April 10 to aid in the fight against COVID-19, after 19 people had become infected there. The team will be sent to 164 cities and towns in order to prevent the epidemic from spreading to the poorest rural areas.

Angolan Health Minister Silvia Lutucuta said the Cuban delegation will train 1,800 health workers. The Inter-Ministerial Commission for Pandemic Response explained that Angolan physicians, along with the Cubans, will visit families around the country.

Despite a 60-year U.S. blockade against Cuba, causing shortages of necessities, the socialist country has an advanced health care system, with free medical care for all residents and advanced scientific and medical research. Cuba has developed life-saving medications that are not available in the U.S. because of the blockade.

The Cuban antiviral “wonder drug” Interferon Alfa-2B, Recombinant is being dispensed by its medical brigades to treat COVID-19. Cuba shared the technology to produce the drug, and a joint Chinese-Cuban facility makes it in China.

Helen Yaffe, author of “We are Cuba!” and a University of Glasgow lecturer, explains: “The Chinese National Health Commission listed this medication among the treatments it is using for COVID-19 patients. Effective and safe in the therapy of viral diseases including hepatitis B and C, shingles, HIV-Aids, and dengue, the Cuban antiviral drug has shown some promise in China and the island has now received requests for the product from 45 countries.” (tinyurl.com/tad7n48)

Cuba’s medical internationalism, begun soon after the revolution, continues as strong as ever despite Washington’s bellicose opposition.