Prioritizing prisons, police and punitive responses to social issues is a public health crisis. These approaches are only aggravated by the global coronavirus pandemic. Incarcerated people, whether they are in jails, prisons or migrant detention centers, are facing down death sentences in overcrowded facilities with limited access to sanitation as the virus spreads.

Those who find themselves under these mutated forms of social and racial control stemming from white supremacy and colonialism are actively being put in harm’s way. In response, detainees across the globe are rightfully resisting in the face of deadly conditions. 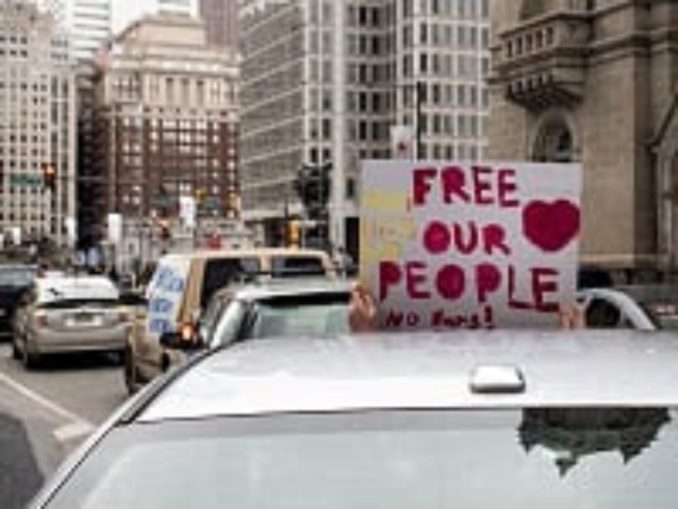 As the pandemic spreads, support grows to free all incarcerated people–at higher danger from infection and death. Here a 150-car caravan wheels through Philadelphia, April 9.

Wherever you see incarcerated people lifting their voices and rising up for their survival, we see state repression. Prisons officials are using force in response to work strikes, hunger strikes and other forms of protest. Prisons are deliberately not designed with health in mind, and we are seeing some facilities respond to virus symptoms by separating infected people from overcrowded general populations into “segregation” or solitary confinement. By United Nations standards prolonged solitary confinement is torture.

People need decarceration, health care and humane housing, not punishment. It is imperative we listen to those affected: “Jail and prison walls can’t contain the spread of the virus. What is on the outside will be on the inside, and what happens to our communities on the inside will affect us all.” (Free Them All Connecticut)

Prisoners in the large Yakima County (Washington state) jail righteously rose up on March 23 in rebellion over being huddled together during the COVID-19 epidemic.  Fifteen prisoners escaped.

Washington Gov. Jay Inslee has done nothing to stop the strain of overcrowding in state prisons, despite warnings from all health officials, including the World Health Organization.

After one inmate tested positive at the Women’s Prison in Pierre, S.D., in late March, nine prisoners, including six who are Indigenous, successfully fled the fatal facility.  The warden of the prison has resigned, and while seven prisoners have been apprehended, two remain at large. (U.S. News & World Report, April 3)

Lansing Correctional Facility in Kansas saw prisoners rebel after 12 of them and 16 guards tested positive for COVID-19. Prisoners swept through offices, broke windows and chairs, and set small fires in the facility before being corralled back under control. (Guardian, April 10)

In a video of the uprising taken on a contraband cell phone and circulated online, guards were shown locked out of a section of the prison, while prisoners voiced their fears of the virus and concerns over the lack of health care. Corizon Health and the state of Kansas have been locked in a battle over the prison’s health care contract with the state. (KMBC News, April 10)

No human being is illegal on stolen land!

Migrants in detention in Immigration and Customs Enforcement processing facilities are facing the same fears about the virus as those in jails and prisons. At least four ICE processing facilities in the last week of March alone saw detainees peacefully protest against potentially lethal conditions with work and hunger strikes.

The ICE processing facilities include Aurora Contract Detention Center in Denver;  the South Texas Processing Center in San Antonio; and Lasalle and Pine Prairie facilities in Louisiana. Those demanding humane conditions and/or their release were met with guards in riot gear, using pepper spray and rubber bullets to disperse  protesters into separate facilities. (Buzzfeed News, March 24)

Over 350 people at Stewart Detention Center in Georgia went on a hunger strike on March 24. One Mexicana detainee, Ventura Quintanar-Rico, 32, said, “We’re just waiting to get infected! They’re not taking the most basic coronavirus precautions at this place. If one of us gets infected, all of us will, we are not able to stay 6 feet apart. We share space with 62 other people. We don’t want to die. It usually takes three to four days to get medical attention here.” (Mijente, March 27)

Under racial and social state control, like many incarcerated people in jails, most migrants have not been lawfully convicted of anything. People held in ICE processing facilities often have come through ports of entry and applied for asylum, currently considered a legal route. Though the law has been used to codify and uphold systems of white supremacy and colonialism, no human being is illegal on stolen land! 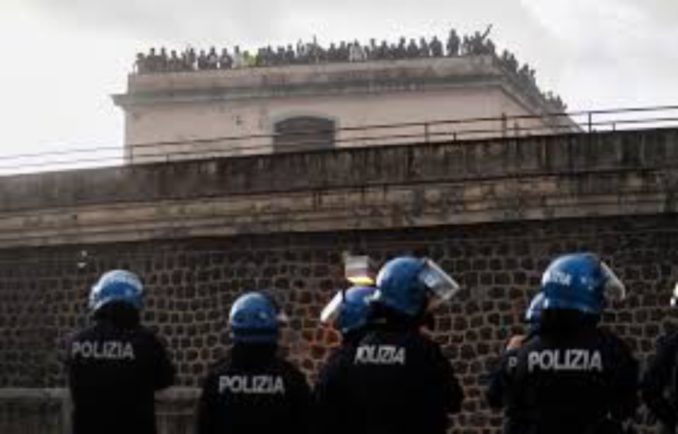 The U.S. has exported its punitive prison system to at least 38 countries, according to the Alliance for Global Justice. Colombia saw at least 13 prison uprisings in the face of the coronavirus, leaving 23 dead. From inside La Picota, a Bogotá prison, inmate Oscar Sanchez, 42, called the clashes between prisoners and authorities “a massacre that until now has taken more lives than coronavirus in Colombia.” Hundreds of prisoners escaped after uprisings in four São Paulo facilities after Brazilian state officials suspended temporary leave permits for 34,000 inmates. (New York Times, March 22)

The fears driving these righteous rebellions are grounded in heartbreaking reality. The rate of coronavirus infection at Rikers Island in New York City and Cook County Jail in Chicago are among the highest in the world, with nearly 300 confirmed cases at Rikers and 400 confirmed cases in Cook County. (tinyurl.com/s9q27g6) Advocates and abolitionists have been warning officials against this very outcome in the early stages of the pandemic, only to be met with inaction from officials.

From coast to coast, governors in the U.S. have the power to grant mass clemencies or reprieves.  Instead New York Gov. Andrew Cuomo is banking that the masses of people do not care about those caged. New York continues to exploit prison labor to produce PPE and hand sanitizer. They are also paying prisoners less than the minimum wage to dig mass graves on Hart Island while continuing to incarcerate new people.

To avoid genocide we need mass releases without exceptions and without ankle monitors or fines. The people in cages staring down the barrel of execution by virus are waking to the reality that they have very little to lose in resisting their conditions. The prison industries that profit off these deplorable conditions are willing to kill while trying to squeeze every last dime out of caged labor.

The generative project of prison abolition that would transform social relations while meeting human needs is coming, whether the prison-industrial system is ready or not.

Jim McMahan contributed information about the rebellion at the Monroe Correctional Complex in Washington state.