Over the last three months, the U.S. government has proven its inability to protect and incompetence at caring for the population. A basic step to promote public health in the face of an epidemic — recommending that we wear protective face coverings when in public — was beyond the capitalist government.

We are now paying a terrible price for that inaction. 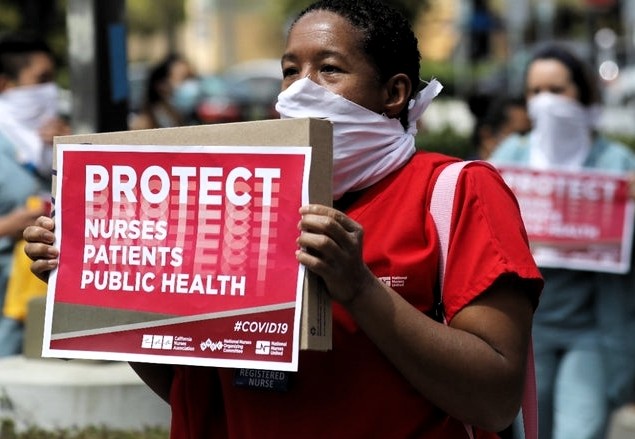 However, the federal government was not the only entity that failed miserably. The Trump administration did not appear out of thin air. They did not become horrible overnight.

There are many large and wealthy hospital systems and other institutions that also fell asleep at the wheel. Starting in late March — when shortages were becoming more acute — some hospital systems finally started to seek out supplies of more personal protective equipment [PPE] and ventilators on their own.

Why wait for shortages that they knew would come? They should have recognized that the government’s inaction would lead to the current problem, and they should have acted to prevent it, instead of wasting two months.

While the primary failure was that of the government, we are seeing the failure of capitalism. Most of the major hospitals in the U.S. are private, for-profit businesses. In this era, businesses generally operate on small margins and with small inventories.

Hospitals probably do not have internal structures that allow for the decisive measures that were necessary. There is no mechanism under capitalism to build a temporary hospital in three days as China did, for example.

There are courageous health care workers who are risking their lives to care for others.  Some of them have died; others will die. Their government and their employers have failed them.

This has been a major failure of the capitalist system. The big capitalist countries in Europe also responded poorly to the crisis. In recent days, the U.S. and at least a couple of European countries have pirated PPE destined for a supposed allied country. There are disputes between European Union countries and between Canada and the U.S. over PPE and medical equipment.

While these disputes are brewing, China is delivering material aid all over the world, including to these parasitic countries.

Capitalism has again proven to be inadequate to meet the needs of the working class on a world scale. Capitalism must be overthrown. Our livelihoods, our health, the health of the planet — our very lives depend on it.