April 3 — One month after initial reports broke on the first confirmed COVID-19 case in New York City, we are in the midst of an unprecedented public health crisis.

As of today, the Centers for Disease Control and Prevention reports 239,279 confirmed cases of COVID-19 and 5,443 total deaths in the U.S. Despite warnings from the global health community dating back to December and early January, the Trump administration’s response to the developing crisis has been lethargic and wholly inadequate, leaving the U.S as the country with the most confirmed cases worldwide at this writing. 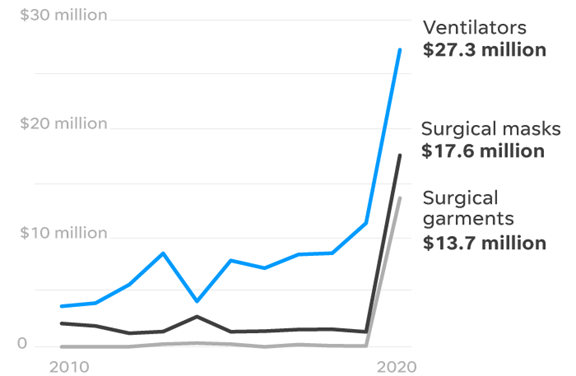 U.S. capitalists rushed to reap superprofits by exporting millions of dollars of medical equipment and protective gear from the U.S. to China as the pandemic began.

Many have assessed the current state of affairs, illuminating the failures of both state- and federal-level legislation and legislators alike to quell panic and to care for the growing afflicted population. These critiques offer an abundance of points on the limited capacity of our governing bodies to care for us, even in New York City, the financial heart of U.S imperialism.

I would go a step further and contend that the system isn’t failing at all, but is, rather, operating exactly as intended. Capitalism is concerned above all else with generating profits, and it does so at the expense of the lives of the workers who  sustain it.

A brief overview of history from the last 50 years could provide numerous examples of entire foreign regimes toppled by the U.S. for barely better profit margins. The COVID-19 crisis is no different, as profiteers are quick to find new ways to make gains from human suffering. Today we see how one person’s affliction can be used as another’s stepping stone to pursue the elusive “American Dream.”

On March 12, the ruling class blatantly made its primary concern known by injecting $1.5 trillion to support plummeting Wall Street markets without a second thought. COVID-19 was proving to be lethal to industries as well as human beings, bringing the mighty U.S economy to its knees.

Suddenly, the same federal government that couldn’t find funds for social programs and universal health care could pull trillions out of thin air. The government of the ruling class has the money; they just don’t want to spend it on anyone aside from themselves.

A March 13 article in The Atlantic glossed over the incredible welfare received by the 1% and argued a “progressive case” in claiming the trillions were necessary for the greater good of the nation to prevent an economic collapse. Right-wing spectators and capitalist apologists were quick to note that the short-term loans offered to big-name firms wouldn’t “cost” the federal government anything — assuming they would be paid back in full with interest. (tinyurl.com/t9npntk)

In doing so, capitalists and apologists silently acknowledge their prioritization of a system more concerned with generating profits than saving thousands of human lives, willing to turn a blind eye to the suffering of the masses to preserve their standard of living.

Profits off pain and suffering

Furthermore, many U.S. capitalists had full knowledge of the crisis to come as the initial outbreak was occurring in Wuhan. These exploiters rushed to export personal protective equipment and supplies soon to be desperately needed in the U.S. Sellers were solely incentivized by the promise of profit, not by mitigating the spread of the disease. U.S. manufacturers exported more than $17.5 million worth of face masks, more than $13.6 million in surgical garments and more than $27.2 million in ventilators to China during the first two months of the year. (USA Today, April 2)

Today, the outbreak in China is winding down, while it continues to ramp up in the U.S. Ventilators and PPE are in very short supply and demand gets higher every day as understaffed hospitals try to manage an ever-growing influx of patients. Equipment prices skyrocket when hospitals must buy on the “free market” which is perpetually profit-driven.

In the trading markets, masks are being aggressively peddled for exorbitant prices, incentivizing the hoarding of supplies by anyone who can afford to. According to Reuters, the federal reserve of supplies isn’t looking much better, with the U.S Strategic National Stockpile nearly depleted of masks, ventilators and other medical supplies. (March 31) The Federal Emergency Management Agency now presides over the stockpile, and has assured the public that it will replenish its stocks with the $16 billion stimulus bill recently approved by Congress. Where’s a $1.5 trillion bailout when you need one?

Recent controversy regarding White House advisor (and Trump son-in-law) Jared Kushner shows how language can reveal much of the 1%’s priorities and intentions.

Politico reported that the online summary of the Department of Health and Human Services was changed following Kushner’s statement that the National Stockpile was the “property of the federal government, not the states.” Clearly differing with Kushner, the deleted definition described the stockpile as “the nation’s largest supply of life-saving pharmaceuticals and medical supplies for use in a public health emergency severe enough to cause local supplies to run out.” (April 4)

Although this may appear to be a simple difference in semantics, I believe that the new definition reveals the intention of the ruling class to hoard and hold the necessary supplies for itself, literally rewriting the role of the stockpile to better suit for-profit interests.

The capitalist system in which we live allocates COVID-19 testing as a privilege, rather than a necessity and human right. Tests are currently in very short supply despite high demand and are provided mostly to people already experiencing severe symptoms in hospital emergency rooms throughout the country.

Most of our facts and figures concerning the crisis are good estimates at best, as local governing bodies simply don’t have the capacity to test everyone. Thousands of cases remain undocumented, and asymptomatic carriers — people who only express milder symptoms of COVID-19 — continue to fuel the spread of the disease. In a recent NPR interview, CDC Director Dr. Robert Redfield said: “One of the [pieces of] information that we have pretty much confirmed now is that a significant number of individuals that are infected actually remain asymptomatic. That may be as many as 25 percent.” (March 31)

Not so shockingly, the wealthy have increased access to testing and high quality medical care through private physicians. Sources such as Vulture have been keeping comprehensive track of stars who have tested positive for the virus, including A-listers such as Tom Hanks and Idris Elba. (April 2)

While I wouldn’t wish this affliction on anyone, I’m much more concerned with the uncontested spread of COVID-19 in places such as Rikers Island, New York City’s main jail complex. According to a Guardian report, the prison’s head doctor described its current state as a “public health disaster,” with cases growing from 1 to 200 within 12 days. (April 1) Thousands of incarcerated people currently endure inhumane conditions, all without PPE and comprehensive medical care, highlighting the cruelty of the U.S prison-industrial complex. As COVID-19 continues to spread, the call to “Free Them All” only grows louder.

Beginning of the end of empire?

The COVID-19 crisis may very well be the nail in the coffin for the already crumbling U.S empire. Cracks in the armor become ever more apparent as U.S citizens face the grim reality that its governing bodies place profits before their own lives.

But the flagship of Western imperialism continues to stubbornly maintain its course despite the icebergs floating precariously ahead, determined to make it through or sink trying, pulling down working and oppressed people in its wake.

Unfortunately for the ruling class, we’re not going down like Leonardo DiCaprio in the movie “Titanic.” There’s hope on the horizon, thanks to medical innovations such as the Interferon Alfa 2B drug, produced by the Changchun Heber Biological Technology joint venture, combining Cuba’s extraction technique with China’s manufacturing prowess.

According to Granma, this antiviral medication has been proven to be effective in treating COVID-19 as well other viral infections such as Hepatitis C, and has been cited by China’s National Health Commission as one of the most used drugs in combatting the pandemic in that country. (March 23) Due to the ongoing U.S. blockade on Cuba, thousands of people are missing out on potentially life-saving medication.

Something has to change. The “free market” will not save us. This crisis already has, and will continue to show us that capitalism is lying on its deathbed. It’s up to socialists to read its last rites.