March 21 — Workers at a popular eatery, Voodoo Doughnut, in Portland, Ore., announced the formation of the Voodoo Doughnut Workers Union (VWU) on March 20. Their written statement asserted this was “to improve working conditions and demand concessions including, but not limited to, higher wages, security and severance packages for all workers laid off due to the COVID-19 crisis.” 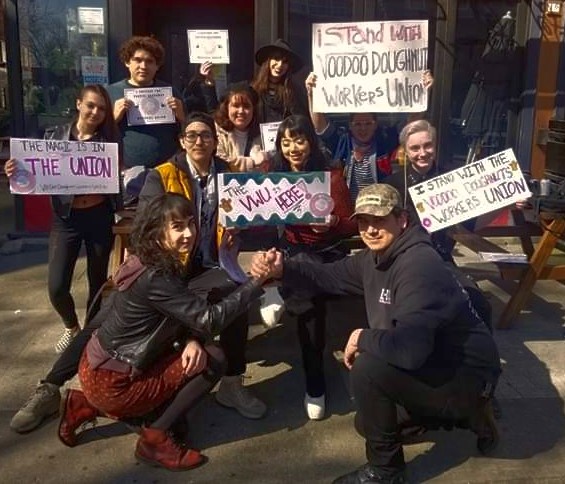 In Portland, Ore., support for low-wage food service workers organizing during the pandemic.

The doughnut chain employs more than 325 workers at nine locations in Oregon, California, Colorado, Florida and Texas. Portland workers at the 22 SW 3rd Avenue restaurant, known as the “Old Town” location, have been organizing with the local chapter of the Industrial Workers of the World since June 2019.

VWU member Samantha Bryce told Workers World that conversations between co-workers about unionizing go back even further: “We have a right to stand up for ourselves and demand that our basic needs are met, that our health and well-being be a priority and that our dignity as good working-class people be respected.”

The March 20 statement noted, “VWU workers have cited a number of serious grievances about their workplace, despite its hip and friendly image. The list includes safety concerns, low wages, stressful working conditions and lack of manageable paid time off and sick leave, as well as severance packages for all who have been laid off due to the COVID-19 crisis.”

Similar to restrictions on restaurants and bars across the U.S., Oregon Gov. Kate Brown ordered the state’s restaurants to suspend dine-in services for at least four weeks and stay open only for takeout and delivery.

Low-paid food service workers are taking the brunt of the closures, intensifying their economic hardship. Politicians are prioritizing the well-being of banks and big business, and workers are left scrambling with little or no financial assistance or job security.

“The most notable struggle with the COVID-19 virus is that many of the doughnut shop workers are being laid off, and still many more employees looking at most likely being laid off in the future,” Bryce said. “These laid-off employees are offered no severance pay or access to cashing in their accrued paid time off. Employees who are still working the shop floor are not currently being offered living wages or hazard pay.”

Since the VWU announcement, the union has not received a response from management or the corporate office about the union or its demands. This reporter contacted the company for comment, but received no reply.

Bryce noted that as layoffs continue in nearly all company locations, it is unclear if these are due to meeting coronavirus COVID-19 needs or if unionization has played a role.

“Many of us live paycheck-to-paycheck on poverty wages and shallow benefits from companies that treat us like we are nothing more than expendable,” Bryce emphasized. “Many of us now will be struggling to find work. Struggling to pay rent. Struggling to buy food. We need each other now more than ever. Now is the time to stand up, but when you do, make sure to stand up together. For a rising tide lifts all boats.”

“I hope that our actions inspire other working-class folks to organize and support their fellow workers, as well as their surrounding communities,” Bryce added.