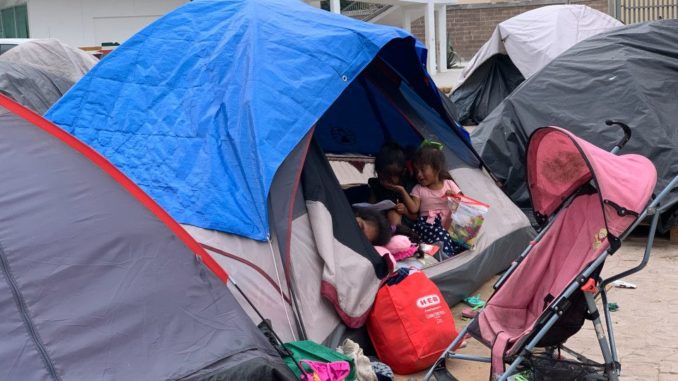 Overcrowded tent encampment in Matamoros, Mexico, on the banks of the Rio Grande, near Brownsville, Texas.

When the demands of the progressive and revolutionary movements concur with the demands of those deep within the mainstream of the system, you know things are changing. Who would have thought a few months ago that prosecutors, judges, district attorneys and doctors would be echoing the same demands of activists and families of the incarcerated? But that is exactly what is happening.

On March 23, a joint statement from elected prosecutors dealing with the COVID-19 crisis and people in custody pointed out what many activists had already said: COVID-19 will hit particularly hard those behind the walls.

The statement read: “There are 2.3 million adults and children locked up in the U.S. in various systems of confinement, including state and federal prisons, local jails, youth correctional facilities, and immigration detention centers. Far more cycle in and out of jail on a daily basis; there are 10.6 million jail admissions every year.”

The judicial system, thoroughly racist, particularly targets Black and Brown people as well as those who do not have documents to be in the U.S.

Indeed, capital can cross any border it wants, but a farmworker cannot!

At the beginning of the health care pandemic, immigrant and prison abolitionist activists immediately pointed out that conditions in prisons and detention centers were ripe for the coronavirus to take hold and spread. In fact, the hated Trump administration is facing growing calls to not only free the detained but to close all immigration courts.

According to NPR, “Immigration and Customs Enforcement reported for the first time this week that one of its workers has the virus that causes COVID-19.” (March 21)

In one prison in Massachusetts this led detained migrants to go on a heroic hunger strike.

NPR reports that more than 3,000 physicians signed a letter urging ICE to release detainees. One of those, Ranit Mishori said, “The window of opportunity is rapidly, rapidly closing because I think we need to let them out before they become sick.” (March 21)

Migrants in detention are fleeing unprecedented catastrophic conditions back home. These conditions were created by U.S. imperialism: climate change and economic and foreign policies that benefit Wall Street and the Pentagon are what force workers to flee. As migrant activists have said, “We are here because you were there.”

Nearly half of the immigrants detained by ICE have been accused of no crime other than civil immigration violations, and many might not have been held under previous administrations.

The statements from elected prosecutors and physicians called for the immediate release of some of the prisoners in order to prevent a “catastrophe.”

And that is where activists and mainstream officials depart. Activists are demanding free them all and free them now!

Who can trust the justice system under this sick system to determine who should be released and who should stay? The only fair answer is to free them all now, not just people determined to be “safer” – as prosecutors are saying.

To not do that today is imposing yet another fascistlike sentence on those behind bars: “Get sick from COVID-19 and possibly die; the government doesn’t give a damn.”

Conditions for prisoners before COVID-19 were already deplorable. Basic items like soap or items for good hygiene are hard to come by. Medical services mirror conditions of the 1800s.

For migrants it is the same — with the exception that they are far from their homeland, to boot.

Just like in regular prison, detained migrants have died while in custody, many of them children who die from easily preventable diseases such as the common flu.

Despite the fact that today fewer people are apprehended at the border, the American Civil Liberties Union points out that immigration detention has reached record proportions.

As the COVID-19 crisis develops, fascist elements in Washington are using the crisis to tighten control over society.

With regards to immigration, Trump used COVID-19 to close the border. (New York Times, March 20) No longer would migrants without documents who could easily fulfill the requirements for amnesty be allowed to come in. They would no longer be taken into detention, but would immediately be sent home or would be forced to stay in Mexico.

Terrifyingly, unaccompanied children will be exempt from that and will be taken and sent to detention. We must sadly ask: Will they ever be seen or heard from again?

Since the beginning of his presidency, Trump had wanted to do all this, but the courts had blocked him in order to respect the right of due process. That right is no longer being respected.

What must be done for migrants and all those detained? We must be clear: No matter what “crime” was committed by those incarcerated — if one was committed at all — it is substantially more criminal to willingly let detained human beings get sick.

Free them all now!