“Border security” is a lethal operation. As the war against migrants rages on under the guise of securing the borders, acts of solidarity with migrants and other oppressed people grow. Many organizations gathered in opposition to the Border Security Expo here on March 11. Demonstrators held up banners and paper-mâché figures of migrants in front of the Henry B. Gonzalez Convention Center.

There, a speaker from the Southwest Workers Union stated: “San Antonio must make a very clear stance that ‘security’ is not enhanced by ramping up the lethality of forces lined up along the border or aggressively targeting immigrants. These are methods of terror. San Antonio should redefine ‘security’ to mean access to food, housing, health care, education and work. These are the things that lead to meaningful, secure lives, not assassinations at borders or deportation of beloved community members.” 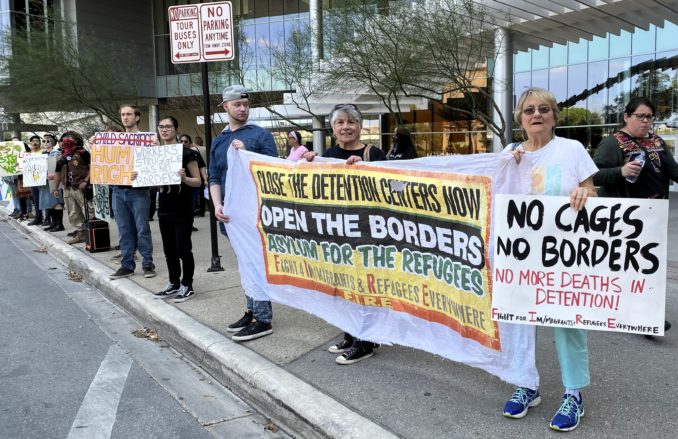 These opponents of imperialist violence picketed and chanted in unison at the hall’s exit as convention attendees were leaving. They were further irritated as they had to walk through demonstrators to get to their hotel across the street.

Members of Autonomous Brown Berets de San Antonio made it to the roof of the parking garage where they dropped a massive banner, which exclaimed, “Chinga out of San Antonio!” Then the protesters busted out miniature cages and banners which read, “Stop Family Separations!” and “Chinga la Migra!” before they began a press conference attended by mostly Spanish media.

After the press conference, demonstrators marched to the Alamo to crash a Border Patrol ceremony. Spirits were high, and the wide coalition of folks gathered in solidarity made their message heard.

Teresa Gutierrez, a national coordinator of FIRE, put the egregious sale of weapons into context:  “During the Border Expo, an ‘all-terrain vehicle’ with a gun mount was demonstrated to participants and later published in the news. This show of force is completely offensive not only to migrants dying at the border but every decent human being.  While cultural and other activities were cancelled in San Antonio due to COVID-19, the Border Expo went on, demonstrating the priorities of this rotten capitalist system: unending war no matter what.”