Published in sputniknews.com on March 5. Translation by Michael Otto.

Seven years have passed since the death of Hugo Chávez. The situation in Latin America and in Venezuela has changed during that time, and yet the reality of the country can still be explained in part by what his life meant, particularly for the masses of farmers and workers in the country.

One could feel the night at its deepest in front of the Caracas Military Hospital. It was March 5, 2013, and thousands of us gathered to confront the most dreadful news: the death of Hugo Chávez. It gave birth to a sadness and a centuries-old oath deep in the heart of the country. 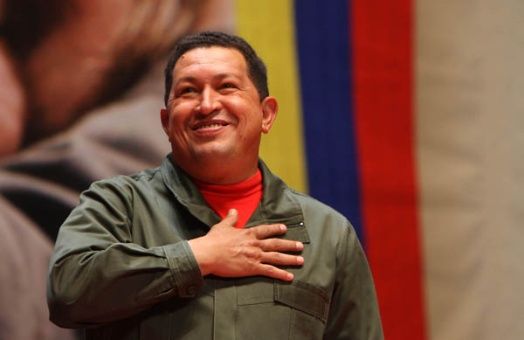 Nicolás Maduro gave us the news at 4:25 in the afternoon. There are many stories about those minutes. One remembers a chill wind blowing under heavy clouds that darkened the city. I saw it from Baralt Avenue near Bolivar Square where we gathered until the early hours of the morning.

The funeral procession began on the morning of March 6. Chávez was taken from the Military Hospital to the Military Academy. We were millions, literally. The multitude crossed Caracas like a slowly surging red wave, Chávez’s casket in the center of a sea of flowers, posters, tears, flags and songs.

The vigil lasted for ten days. Women and men came from all over the country, however they could, with whatever they had, to say goodbye to Chávez, to the commander, to thank him, to make a vow. Queues stretched for miles during the day, at night and before sunrise. I saw him around 10 o’clock at night when a woman had fainted near me, while outside the lights on the hill called to mind a nativity scene.

In those days, you could see the purest image of what Chávez represented to millions. And that was the depth of a political process that moved a whole people, refounding their history. There was no doubt that the majority, the poor, were with Chavismo, and that its adversary, anti-Chavismo, with an indelible upper-class brand, would never be willing to understand this.

A month and nine days later Maduro won the presidential elections and Henrique Capriles Radonski, his opponent, refused to recognize the victory. Instead he attempted a coup that caused 11 deaths, as well as burning health centers and party buildings.

Chávez died when he was at the height of his powers. A majority of progressive, left-wing administrations governed the continent at the time. For example, Evo Morales, president of the Plurinational State of Bolivia, accompanied the procession from the Military Hospital to the Military Academy.

In attendance were the presidents of Ecuador, Rafael Correa; of Uruguay, José ‘Pepe’ Mujica; of El Salvador, Mauricio Funes; and of Cuba, Raúl Castro. They were joined by President Cristina Fernández de Kirchner of Argentina and President Dilma Rousseff of Brazil, who was accompanied by Lula Da Silva, the former Brazilian president.

The U.S. government was preparing to soon wage an aggressive campaign of revenge to restore [its neoliberal puppet regime]. One of the expressions of that process was, and is, a policy of dismantling the advances in Latin American integration created in previous years, such as the Union of South American Nations (UNASUR) and the Community of Latin American and Caribbean States (CELAC).

Chávez had been at the center of these advances, in a phase of the consolidation of forces that began in Mar del Plata, Argentina, in 2005 to stop the U.S. attempt to impose the Free Trade Area of the Americas (FTAA). In addition to the above mentioned organizations, Chávez also promoted the Bolivarian Alliance for the Peoples of Our America (ALBA).

Chávez was one of the main architects of the period of the greatest Latin American unity since the era of independence. His death was cause for sadness not only in Venezuela, but throughout Latin America.

How can you measure the transformations and stability of a country? How do you measure a political process with the power that the Bolivarian Revolution deployed? To arrive in Venezuela in the time of Chávez was to jump into a current that projected its advance toward a clear outcome.

The country radiated political energy, an effervescence with a fundamental wellspring: the emergence of the poor workers and farmers as the protagonists, of the popular neighborhoods, of the rural areas, as the makers of policies, despised and underestimated by anti-Chavismo.

The material impacts [of the blockade] began to appear in 2014 and centrally in 2015 with shortages. Cities were packed with long lines at the doors of supermarkets, grocery stores and pharmacies at any time of the day or night. The country that had experienced years of growth was entering hard times of resistance.

The Venezuelan government called out their two main enemies: on the one hand, the oligopolistic capitalist class inside Venezuela, which was blamed for the hoarding of products; on the other hand, the government of the United States. Both were held responsible for what was denounced as an economic war.

Difficulties mutated during those years [of sanctions]: the devaluation of the currency forced monetary changes, inflation reached levels of hyperinflation and then decreased; the gross domestic product contracted by more than half; there was large-scale emigration, a change from formal to informal work; and currently, there is a process that is known on the streets as “dollarization.”

Those years included a legislative electoral defeat for Chavismo in 2015, right-wing insurrectionary escalations in 2014 and 2017, the election of a National Constituent Assembly in 2017, along with governorships and mayors that same year, a presidential election in 2018, and finally in 2019, the formation of a parallel fictitious government.

Time was always dizzying during the absence of a truce when profound changes were occurring.  In an attempt to draw the elites into an alliance, the government discarded its discourse that big business was an enemy and instead focused on the confrontation with the U.S. and the putschist sector of the opposition.

The social fabric, torn by assault after assault, both political and economic, experienced a restoration of material and symbolic inequalities. The political energy that had permeated the whole country was reduced to specific territories and timeframes, and Venezuela changed from being a largely mobilized society — whether by Chavismo or the opposition — to a largely demobilized society on the surface.

The image of Chávez’s funeral revealed the depths of Chavismo. Those who have always sneered at the Bolivarian process have never measured what the Revolution represented to the humble people at every level: rational, political, subjective, cultural, emotional and collective.

Chavismo grew into a political identity that was centrally shared by the masses. The people in the millions have refused to give in since the death of Chávez — those people who make up the approximately 25 percent of “hardcore Chavismo.”

Those who never gave up, who fought for the dream, were and are ironically the people hardest hit by the [criminal sanctions]. Loyalty was upheld as a banner in the hills, in the peasant communities, where, before the Bolivarian Revolution, they were excluded and had to fight [hunger] daily with “arepa” corn pancakes.

During seven years of absence of Chávez, of the reconfiguration of several key policies, of a new economic scenario where those who are gaining are the ones who have historically won, a perfect storm of events were still unable to obliterate a political and cultural identity.

That is why Chavismo is a daily experience in working-class neighborhoods, in debates, in visions of the future country. That is also why in the electoral projections for, as an example, the next legislative elections in December 2020, there is the possibility that they will obtain a majority.

The impact of Chávez can still explain a central aspect of Venezuela’s current situation. That is the reality denied by the big media, the lies of the opposition and the [self-serving and false] U.S. narrative. That reality has not wavered.