Flanked by a large white “Bird of Freedom” wearing a “Free Mumia” sign, dozens of activists from Philadelphia and New York gathered outside the office of District Attorney Larry Krasner on Feb. 28. The demonstration was called in anticipation of Krasner’s finally filing a response on March 2 to the Post Conviction Relief Act petitions filed by Mumia Abu-Jamal’s attorneys last September. 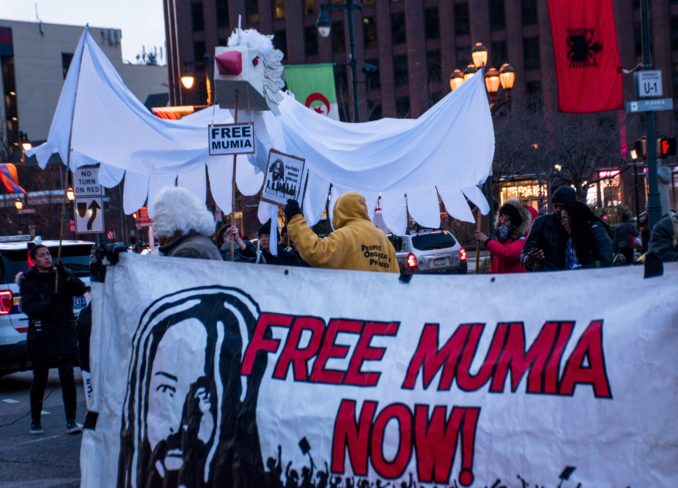 However, just days earlier on Feb. 24, the Pennsylvania Supreme Court accepted a King’s Bench petition from Fraternal Order of Police proxy Maureen Faulkner charging Krasner with being biased toward Abu-Jamal. The FOP petition sought to replace Krasner with conservative Pennsylvania Attorney General Josh Shapiro and bury new evidence uncovered in December 2018 in hidden file boxes. The demonstration outside Krasner’s office was followed by a spirited march through Center City, ending outside Shapiro’s office where activists blocked a busy intersection before dispersing.

Pam Africa, Minister of Confrontation for the Move Organization and leader of International Concerned Family and Friends of Mumia Abu-Jamal, opened the rally: “The struggle to free Mumia is a fire they can’t put out. They want to bury the evidence that Mumia is innocent. The system has used every ploy they can come up with to try to kill Mumia.”

Johanna Fernandez, with the Campaign to Bring Mumia Home, stated, “A King’s Bench petition essentially asks the courts to intervene in a situation of ‘great public interest.’ It is not intended to carry out a vendetta when an individual in the case doesn’t like what the state is doing. … In all his briefs DA Krasner has vigorously opposed Mumia. The only thing he did, and that’s because he was told to by Judge Tucker, was to release hidden evidence. Now they want to bury that, too.”

Keith Cook, Abu-Jamal’s older brother, concluded the initial rally, calling for justice for his family: “We got railroaded because they wouldn’t let us speak in the court 37 years ago. Now we are so close to freedom, and we won’t let them silence us this time.”