There has been a surge of strikes in the U.S. recently, many of them fueled by demands for a decent income that keeps up with the cost of living.

Right now, graduate student workers at the University of California Santa Cruz are on the front lines. They are on a wildcat strike to win a cost-of-living allowance — once common in union contracts, but now something few workers have and most workers need. 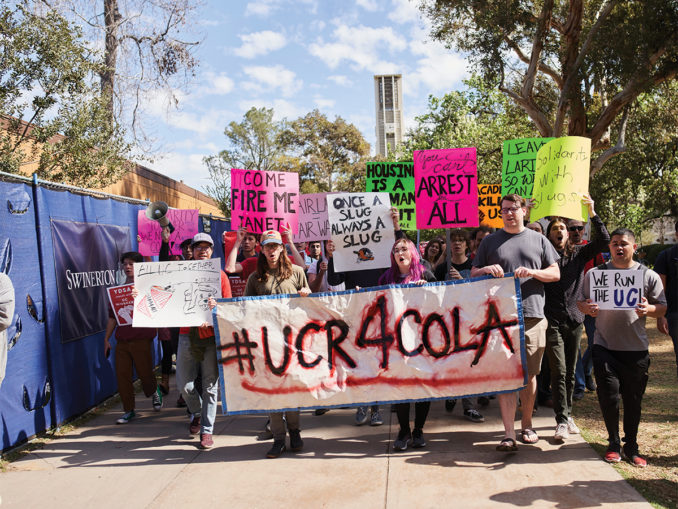 The movement began with a “grading strike” in December with 233 grad student workers refusing to submit grades. On Feb. 17, they escalated the withholding of their labor into a full teaching strike. Because the current master contract between the whole UC system and United Auto Workers Local 2865 has a no-strike clause (and no COLA language), they had to take the brave step of going on what’s known as a “wildcat strike.”

But what was the alternative to striking? It was to continue juggling impossible bills — paying exorbitant rents in Santa Cruz, as well as groceries, child care, health care and other obligations.

The grad workers are up against formidable foes, including the Santa Cruz Police Department, which arrested 17 strikers for blocking traffic on the first day of the escalation.

Also positioned against the strikers is UC President Janet Napolitano, who has issued termination letters to 54 of them and disqualified others from teaching assistantships the next quarter. Before assuming the UC presidency, Napolitano was the top cop under President Barack Obama, heading up the Department of Homeland Security. Now, with a salary of $540,000 a year, she can do without a COLA increase.

Democrat or Republican, a boss is a boss!

The UAW top leadership did not authorize and, unfortunately, has not backed the strike. Previously the union bureaucracy opposed Local 2865 for passing a progressive resolution supporting the Boycott, Divestment and Sanctions movement against Israeli apartheid.

But despite the challenges, the strike has spread. Carlos Cruz, a fired grad student in the History Department, told WW: “Folks from different universities have been outraged, so we’ve started to see COLA campaigns at UC Santa Barbara,  UCLA, Davis, and San Diego.” Demands also include the immediate reinstatement of all those fired. At UCSC the grading strike began with less than 250 student workers, but now twice that many have pledged to strike next quarter to protest the terminations.

While Napolitano’s spokesperson Andrew Gordon claims the strikers’ actions “unfairly impact undergraduate students,” many undergrads see that it is the firings that will disrupt their education. Hundreds have signed a solidarity statement supporting the strike. Faculty are also behind the grad students. (The Guardian, Feb. 28)

The UAW, which represents graduate students around the country as well as at UC, first gained COLA language in its contracts with the auto companies in 1948. The basic premise was that when prices go up, wages should also rise to keep up with inflation.

Some progressives in the union were leery that COLA would actually give the bosses an excuse to cut wages when prices dropped. But over the years, as COLA increases were “folded into” autoworkers base pay in every new contract, the formula meant that union members received a bigger share of the value they created.

At one time, when over one-third of all U.S. workers belonged to unions, COLA was standard contract language. This also put pressure on non-union employers to pay wages that were linked to inflation — so workers would think they didn’t need a union!

Decades of concessions and union busting now paint a different scenario. Only 10.3 percent of workers in this country are unionized. Many of them have lost COLA, including Ford, General Motors and Fiat Chrysler workers, who were among the first beneficiaries. With the help of the capitalist state, the companies used the 2009 auto bankruptcies to seize workers’ hard-fought gains, including COLA.

The COLA that strikers at UCSC are asking for is a fixed amount to support their housing needs, but their demand is based on the original principle — that wages should reflect the worker’s actual living expenses and not be undercut by capitalist cost cutting.

Cruz explained, “To me it’s important because we see it as a fight against poverty, indentured servitude. For someone like me, from an immigrant, single-parent household, we’re told our whole lives that education was the way out of poverty, but we live in continuous precarity. We have to get second and third jobs or take out loans. We are expected to perform, but we are so exhausted. A lot of folks are turning in one kind of poverty for another, a more educated one, but we continue to lead precarious lives.”

These grad student workers are fighting for their economic survival, but every worker has a stake in the outcome.