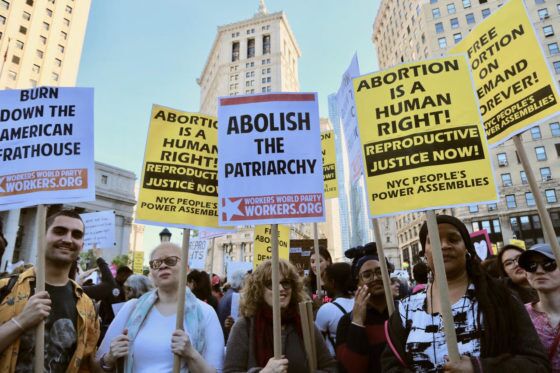 A National Day of Action for access to abortion drew crowds of supporters in New York City on May 21, 2019.

The first case was brought by a Louisiana abortion clinic against state law Act 620, which would require doctors providing abortions in the state to have admitting privileges at a hospital within 30 miles of their practice. An identical law in Texas  had been ruled unconstitutional by the Supreme Court in 2016, Whole Woman’s Health v. Hellerstedt.

The second case was brought by the state of Louisiana, now represented by interim health secretary Stephen Russo, to defend right-wing Act 620. This suit challenges earlier Supreme Court rulings that protect the right to abortion.

In 2019, SCOTUS sent the first case, passed in 2014, back to the notoriously reactionary U.S. 5th Circuit Court of Appeals. The Center for Reproductive Rights had appealed, on behalf of Louisiana abortion providers, to keep the law from going into effect until they could file a petition for review. In a 5-4 decision in their favor, Supreme Court Chief Justice John Roberts chose to vote with the four justices who support abortion rights, so the case would return to his court in 2020.

As WW wrote in 2019, “Roberts’ vote was not to affirm abortion rights, but a hands-off message to the lower court not to short-circuit the Supreme Court’s power. All it did was maintain the status quo.”

Justice Brett Kavanaugh, writing a lone dissent to the ruling, asserted the only way to prove whether the admitting-privileges requirement would impose an undue burden was to let the law go into effect and see what happens. This exposed his true anti-abortion colors, which he had hidden during nomination hearings in 2018. It meant that “some women could be completely denied the choice to terminate a pregnancy and forced to carry the pregnancy to term.” (scotusblog.com)

As WW concluded: “What the ruling ultimately shows is that Roberts is not a born-again pro-choice hero, but a strict defender of the Supreme Court’s prestige and power, which was surely sullied by Kavanaugh’s history of attempted rape of a teen-age girl. Given his dissent, Kavanaugh revealed that he is truly heartless and cruel about women’s health and well-being. Just as the thousands of women who protested against his nomination understood in their bones.”

Abortion providers challenged the Louisiana law because severe complications during abortions requiring hospitalization are exceedingly rare — as in practically never.

The law’s real purpose is to drive clinics out of business, as happened in Texas, and to restrict access to surgical abortions. If the law stands, two out of three clinics will be forced to close in Louisiana.

The second suit, only recently discussed by the media, is a sneak attack on abortion rights themselves. Filed on Feb. 1, 2019 (Gee v. June Medical Services LLC et al.), it is meant to demolish not just Whole Women’s Health or other cases like Planned Parenthood v. Casey in 1992, but Roe v. Wade, the Supreme Court’s 1973 decision establishing the right to legal abortion.

Chief Justice Roberts’ seemingly pro-abortion vote in 2019 may have instead been to assert that if any court was going to overturn the 2016 ruling, it should be the Roberts Court — after extended, intensive oral arguments and deliberation.

As The Intercept wrote on Feb. 10, the second Louisiana suit against clinics “threatens not only to undo decades of precedent allowing abortion providers to mount legal challenges on behalf of their prospective patients, but also dismantles a century of precedent in other kinds of cases in which plaintiffs similarly seek to vindicate the rights of third parties.” An example in criminal cases is that defendants have been granted standing to assert jurors’ equal protection rights if they were rejected for jury duty based on race.

What is “legal precedent”? It is a ruling that establishes a principle which is then used by judicial bodies to decide later cases having similar issues or facts. In this way, a past decision becomes an authority that judges are expected to follow. In Latin it’s the doctrine of “stare decisis.”

The second suit, continues The Intercept, “is the latest salvo in the ongoing effort of anti-abortion lawmakers to erode reproductive rights. Without ever ruling on the constitutionality of any particular abortion restriction, the Supreme Court, by ruling in favor of Louisiana, could make it practically impossible to challenge states’ increasingly draconian and punitive restrictions on abortion and ultimately eviscerate reproductive autonomy.”

Supporters reflect seriousness of the conflict

On the other side, right-wingers of all kinds have massed to defend both Louisiana laws.

The March 4 SCOTUS hearing will only provide clues about the final ruling based on the justices’ questions. The final decision will not be revealed until the end of June, when the court issues its most controversial decisions.

Because they haven’t been able to win in the court of public opinion, the right-wing has resorted to stealth legal maneuvers in an attempt to abolish the right to abortion.