Police forces killed four anti-government protesters in Chile during the first week of February. In the U.S., revolutionary hip-hop artists Rebel Diaz played an East Coast tour to benefit organizations on the front line of the people’s rebellion in Chile. They include Hijos de la Primera Linea (Children of the First Line) and CODEPU (La Corporación de Promoción y Defensa de los Derechos del Pueblo/Corporation for the Promotion and Defense of the Rights of the People). 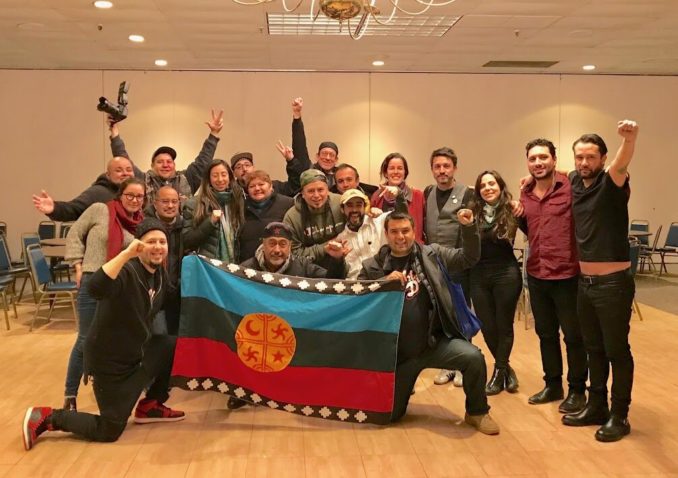 Members of Rebel Diaz, Nesto Nieves (with camera) of REDio Vision, A Desalambrar and Mapuche flag.

Since early October, mass protests have taken over the streets of Santiago, the capital, to demand reversal of government-imposed transportation fare hikes.  Police responded by murdering at least 27 protesters; blinding over 500 people by shooting pellets, bullets and gas canisters at their eyes; and arresting  9,794 people, including 1,100 children and youth.

People who have increasingly been impoverished by decades of neoliberal austerity — orchestrated by governments that trace their roots to the U.S.-sponsored fascist coup that overthrew socialist President Salvador Allende on Sept.11, 1973 —  have been in the streets every day.

Today’s protesters, not satisfied with billionaire President Sebastián Piñera’s fare-hike reversal, are demanding his government resign. They also call for a Peoples’ Convention to scrap dictator Gen. Augusto Pinochet’s 1980 laws for a new Constitution. (Pinochet ruled Chile from 1973 to 1990.)

Rodstarz and his brother G1 of Rebel Diaz explained to a packed house at the Boston Teachers Union hall on Feb. 8 that massive repression has led to massive resistance by young people, union members, Indigenous peoples, migrant workers and social organizations.

Moonanum James, a member of the Wampanoag Nation and co-leader of United American Indians of New England, opened the event on a stage framed by flags of the Mapuche Nation, who live in South America’s southern region.

Samuel Ordóñez, a representative of the immigrant rights’ group COSECHA, came straight from a victorious hunger strike at the Massachusetts Statehouse for migrant workers’ right to have a driver’s license. He spoke in solidarity with the Chilean people. So did Kristin Turgeon, representing Workers World Party.

Families from the local Chilean community filled the tables. Children led the way on the dance floor.  Eroc Arroyo and Opti Brown, from Boston’s legendary Foundation Movement, wowed the audience with their classic raps and effervescent optimism.

No one wanted A Desalambrar’s final set to end. Their guitars, wooden flutes, chimes, Andean percussion and sublime, militant poetry brought Chile’s New Song Movement of Victor Jara and other martyrs of the 1973 massacre at Santiago Stadium to glorious life for a new generation of artists and fighters.

Throughout the four-hour event, Nesto Nieves of REDio Vision and Rodstarz projected scenes onto the walls from the front lines of today’s Chilean rebellion. Their eyewitness footage was difficult to watch, as it showed and reported police shootings, rapes, torture, use of poison gas and fire, and gruesome murders.

Rebel Diaz also projected Prensa OPAL, Chile’s live-action coverage of a Jan. 25 street battle in Santiago — a must-see for those who want to understand and lend solidarity to the struggle there. (prensaopal.cl)

The military murdered and imprisoned tens of thousands of Rodstarz’s parents’ comrades and co-workers. They fled to Chicago and then to the Bronx for their family’s survival.

Rebel Diaz dedicated their homage to Florence Reece’s anthem for the 1931 Harlan County coal miners’ strike to the Boston School Bus Drivers’ Union. The group reminded the world that now is the time to act and declare: “Which Side Are You On?” (tiny.cc/rgb3jz)

The writer is a member of the Executive Board of United Steelworkers Local 8751, the Boston School Bus Drivers Union.