Bulletin: Bernie Sanders is the winner of the Feb. 11 New Hampshire primary with 26 percent of the vote.

The path to becoming president of the United States — the so-called “democractic process” — is full of undemocratic obstacles that nearly always send a wealthy, white, cisgendered, heterosexual, Christian-identified man to the White House. 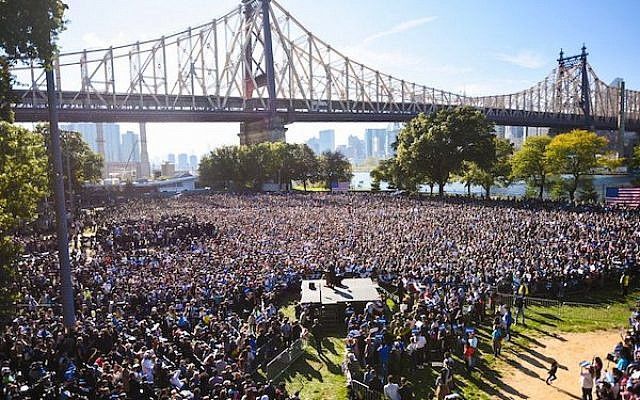 Just to become a contender requires massive amounts of cash, most coming from wealthy donors. Then comes the Electoral College, which is based not on the popular vote but on the number of electoral votes allotted to each of the 50 states. This system, created by slave-owning “founding fathers,” is biased against big cities, and allowed Donald Trump to become the 45th president, even though he had 3 million fewer popular votes than his opponent.

The long, drawn-out procedure of choosing the Democratic Party presidential candidate includes months of debates, followed by a primary season that runs from February to June, culminating in a convention in July.

Currently, two Black candidates and one Latinx candidate have dropped out of the race, while the Democratic National Committee has changed the rules to allow the participation of billionaire former New York Mayor Mike Bloomberg in the next debate.

The first contest for convention delegates is always the Iowa caucuses. This year those took place Feb. 3, to be followed by the New Hampshire primary Feb. 11.

Success in these two states can give a candidate a distinct advantage going forward. Yet combined, these two states have a population of only 4.5 million. By contrast, almost 33.3 million people live in the country’s two largest metropolitan areas — centered on Los Angeles and New York City.

Among the country’s “whitest states,” New Hampshire is number three and Iowa number five — and both also have a low union density. Why do these two states, which in no way represent a cross section of the voting population, go first?

The caucus system in Iowa makes it particularly difficult for working people to participate. In a primary election, voters go into a polling place, cast their votes and leave. Caucus voters, however, need to commit hours of their day to a complex procedure which involves meeting, discussing the candidates, voting, more discussion and then a second vote.

Where is the “democracy” if people with jobs or other responsibilities and obstacles can’t participate? Total voting in the caucuses numbered around 175,000 this year.

Returns from the Iowa caucuses were expected to be released Feb. 3, after the polls closed. However, a glitch in a smartphone app designed to tally votes led to major delays, with the full results released days later.

Shadow, the company that developed the app, has Democratic Party ties. This has fueled suspicion that the process may have been tainted to weaken the only candidate who identifies as a socialist — Bernie Sanders. That is speculation, but when only 62 percent of the returns were in, the media immediately portrayed Pete Buttigieg as the clear leader.

Only later was it announced that Buttigieg and Sanders were nearly equal in pledged delegates, with Sanders holding a clear lead in popular votes. Reports from the urban areas, where Sanders had the most support, came in last.

Sanders’ version of  “socialism” is really a program to reform capitalism. But the capitalist class is in no mood for reforms like free college tuition, Medicare for All or rolling back the anti-union Taft-Hartley Act. Many among the wealthy could live with a moderate Democrat like Joe Biden or Pete Buttigieg, but want to make sure that Sanders is not the nominee in July.

With Biden trailing Sanders, Buttigieg and Elizabeth Warren in the Iowa contest, corporate dollars are starting to flow to the safest of the three: Buttigieg. Yes, it is progressive to see an out gay man getting such significant support. However, much of that support is tied to his so-called “electability,” i.e., his moderate approach that does not even mildly challenge capitalist profit-taking.

Who’s in Sanders’ base?

Young people — including many youth of color — have jumped into a mass movement trying to make the senator from Vermont the Democratic nominee for president. Many are also flocking to the Democratic Socialists of America, which has grown exponentially since the Sanders campaign of 2016.

Another constituency that Sanders is making a strong pitch to, and making headway in, is organized labor. Most unions have not yet made an endorsement in the Democratic race. Many will wait to see who the party nominates at its convention. Nevertheless, four national unions and a number of state, regional and local labor bodies — including Service Employees Local 1984, with 30,000 members in New Hampshire — have already endorsed Sanders. Other unions have endorsed either Biden or Warren.

Rank-and-file unionists are gravitating to Labor for Bernie. These workers know they have nothing to fear from a program tagged “socialist.” Relatively speaking, this represents a move to the left in mass consciousness, which should be welcomed.

In response, Biden socialist-baited Sanders in the Feb. 5 New Hampshire debates, saying, “Every Democrat will have to carry the label Senator Sanders has chosen for himself. He calls himself — and I don’t criticize him — he calls himself a democratic socialist.” (cnbc.com, Feb. 6)

Trump, meanwhile, used his State of the Union address to attack the whole Democratic Party for being socialist. That’s the epithet 45 uses to attack the Affordable Care Act, food stamps and other human needs programs, many of which were won during the class battles of the 1930s — which were led by socialists and communists.

The ultraright, under Trump’s leadership, has added socialist-hating to its arsenal of reactionary ideological tools, which include white supremacy, xenophobia, misogyny and anti-LGBTQ2+ bigotry. These forces want to build a base of support among backward white workers as well as the middle class.

While Trump calls them socialists, most Democratic elected officials are going out on a limb to show they are nothing of the kind. Taking a cue from House Speaker Nancy Pelosi, they jumped to their feet and applauded when Trump, during his State of the Union campaign speech, attacked Venezuela as “socialist” and recognized Juan Guaidó, an insignificant politician inside his own country, as “president” of Venezuela.

Even Sanders called the real president, Nicolás Maduro, a “dictator” during one of the presidential debates.

While reform-oriented social democrats are growing their base in tandem with the Sanders movement, this may be a transitional phenomenon.

Interest in real, revolutionary socialism — the overthrow of the capitalist class, what Marx called “expropriating the expropriators” — is also on the upswing.