Feb. 4 — While impeachment, the Iowa caucuses and the State of the Union message dominate the news cycle, the White House is again quietly pushing forward its attack on the poorest and most oppressed sectors of U.S. society. And it is disguising its offensive as efficiency, eliminating waste and saving taxpayers’ money. 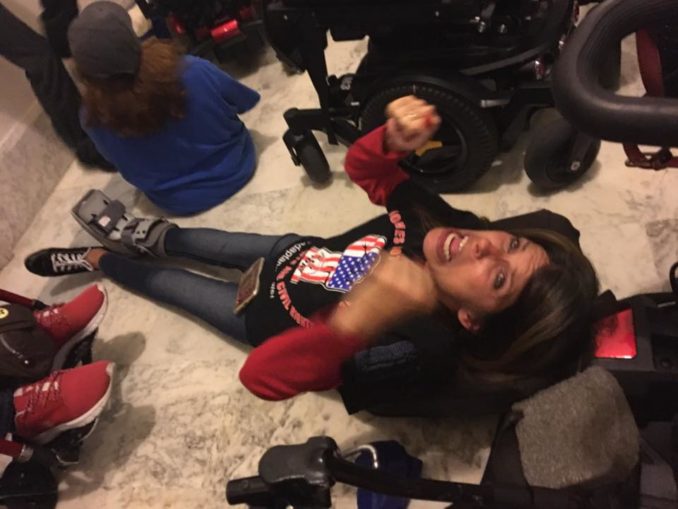 This continued effort to eliminate the possibility of people receiving health and disability benefits exploded in the summer of 2017 with the administration’s attempt to shut down progressive aspects of the Affordable Care Act and to cut out most Medicaid.

That summer, heroic direct actions in Senate buildings by people in organizations like National ADAPT (Americans Disabled for Attendant Programs Today) prevented the cuts from being passed by Congress.

On the July 25 National Day of Action, senators voted to take up the first anti-ACA bill — and 95 people were arrested in protest. Police grabbed 31 protesters in the Senate chambers as they chanted, “Kill the bill! Don’t kill us!” Then 64 people were arrested in the Hart Senate Office Building as they yelled they would “rather go to jail than die without Medicaid.” (tinyurl.com/whjdzay)

With mass pressure at their back, a few Republican senators joined the Democrats to vote down rescinding the ACA.

Now, since the Democratic Party-led House of Representatives is unlikely to pass any anti-popular law in an election year, the Trump right-wingers are waging their attack through bureaucratic action. On Nov. 18, the Social Security Administration announced de facto plans to eliminate Social Security disability benefits for many adults and children.

Of course, the bureaucrats don’t express their plans that openly. Instead they say they will simply conduct more frequent reviews of eligibility for the 2.6 million people affected — every two years. That means most people will be in a continuous state of “review.”

This may sound reasonable to people who do not need this support to stay alive. But some people — how many can’t be estimated now — who need these benefits would lose them. And all will go through the unnecessary anxiety of facing that loss and being unable to plan their future with any security.

In reality, it is very difficult to get eligibility for these benefits, even for those in need. In a Jan. 16 op-ed in the New York Times, former public service attorney Jon Stein explains: “The current system already presents plenty of hurdles. It can take years to qualify for disability benefits and the eligibility test is so tough that more than 60 percent of applicants are initially denied. Once awarded, the benefits are subject to government review at periodic intervals.” (tinyurl.com/uwqhxv6)

What’s the alleged benefit? The SSA claims the revised policies will save $2.6 billion. But it will cost $1.8 billion to administer the reevaluations! The government could save more money canceling an aircraft carrier — which is always a good idea. The figures just prove that the goal is to punish oppressed people defined as “not productive” under capitalism.

The potential for combatting this SSA offensive exists. Before the op-ed was published on Jan. 16, some 46,000 people had sent public comments on the punitive rule change, almost all opposing it. By the Jan. 31 closing date for comment, more than 120,000 had expressed their opinions, almost all opposing the changes.

The comments show a mass attitude united against this right-wing, bureaucratic scapegoating. What will be more decisive in stopping the attacks is the kind of actions like those taken by ADAPT and others who fought to keep ACA benefits in the summer of 2017.