Palestinian organizations have issued a strong joint condemnation of the so-called peace plan, aka colonial “deal of the century,” from the Trump administration.  It is supported by the racist, Zionist Israeli regime led by Prime Minister Benjamin Netanyahu. 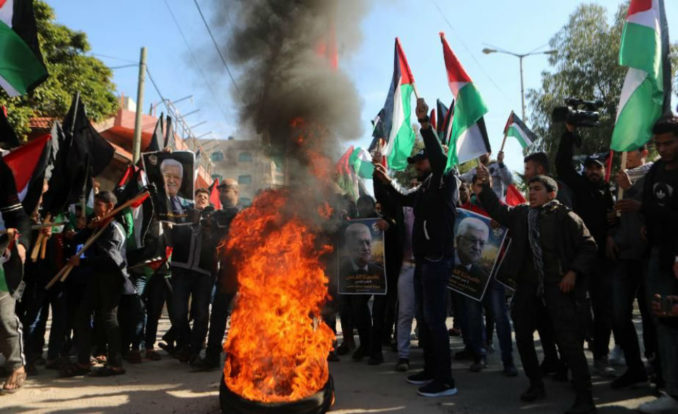 United protest organized by Hamas, Fatah and Popular Front for the Liberation of Palestine in Gaza, Jan. 28.

This misnamed “Vision of Peace” announced by Trump Jan. 28 calls for Israel’s annexation of all stolen Palestinian lands taken during the 1967 war and the illegal expansion of Zionist settlements from the West Bank to the Jordan Valley.  This annexation includes historical holy sites inside East Jerusalem on the West Bank where the U.S. had threatened to move its embassy from Tel Aviv since 2017. Washington moved the U.S. Embassy to Jerusalem on May 14, 2018.

Under the phony guise of a “two-state solution,” this annexation will, in essence, force the already displaced Palestinians onto just 15 percent of their occupied lands — after Israel has already seized their most arable agricultural lands and best water sources.

Trump’s plan — justifiably characterized as the “steal of the century” — is a blatant slap in the face to the Palestinian people’s right to liberation and self-determination.  It is the latest blow in the continuing onslaught against the Palestinians which started when they were brutally displaced by the U.S.-backed Israeli state established in 1948.

Trump’s son-in-law, Jared Kushner, was given credit for being the “architect” of this “deal.”  In response to the Palestinians’ rejection of the plan, Kushner arrogantly stated, “The Palestinians probably need a little bit of time to take a cold shower and to kind of digest the plan.” (Middle East Eye, Jan. 31)

Even before Trump’s announcement became official, members of three different Palestinian political currents, Hamas, Fatah and the Popular Front for the Liberation of Palestine, held a united demonstration in Gaza, known as the largest open-air prison in the world.

Ismail Radwan, a member of Hamas’ political bureau, commented: “The security coordination with the Israeli occupation must be stopped.  We are running out of choices and all options on how to respond to this deal are now on the table. Palestinians have been deprived of their rights for decades and they will not let this [deal] pass without a fight.”  (Middle East Eye, Jan. 28) 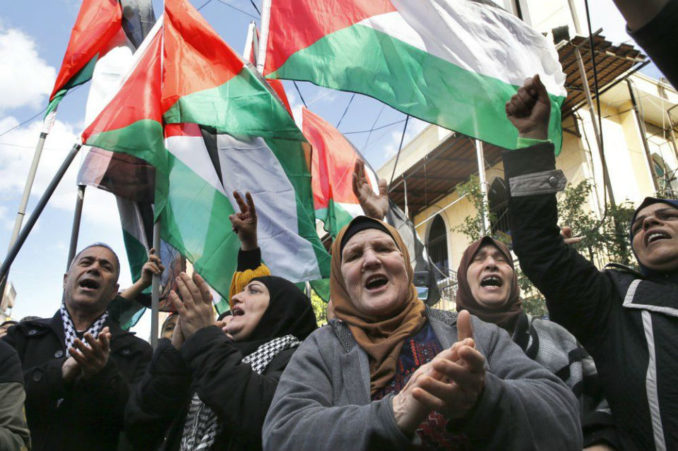 In the days following Trump’s announcement, protests occurred in solidarity with the Palestinians not only in the Occupied Territories of Gaza and the West Bank, but in refugee camps in Jordan and Pakistan.  At demonstrations in Beirut, Israeli flags were burned in front of the U.S. Embassy. There were also solidarity protests in Canada, Europe, New Zealand and the U.S.

The Palestinian Authority — which has been policing the borders between Israel and the West Bank, while cooperating with the CIA — reportedly cut all ties with Israel and the U.S. In an emergency summit with the Arab League in Cairo, Palestinian Authority President Mahmoud Abbas stated Feb. 1: “We’ve informed the Israeli side … that there will be no relations at all with them and the United States including security ties.” The League, as a whole, has rejected the plan. (Reuters, Feb. 1)

Various statements of condemnation were issued, including the following:

“Samidoun Palestinian Prisoner Solidarity Network joins our voice with that of Palestinians and all people of conscience around the world in rejecting and condemning Donald Trump and Benjamin Netanyahu’s racist, colonialist, so-called “Deal of the Century.” This “deal” blatantly enshrines settler colonialism and Zionism without even a facade of concern for allegedly universal principles of justice, sovereignty, self-determination and international law from which Palestinians are systematically excluded.

“While we are entirely certain of the utter failure of this “war plan” for occupied Palestine (it is certainly not any form of plan for peace) when confronted with the unified rejection of the Palestinian and Arab peoples and all supporters of justice around the world, we also emphasize the urgency of escalating our struggle to confront Zionism and imperialism and bring about their defeat.  This must mean expanding our campaigns for boycott, divestment and sanctions with material effect; defending Palestinian resistance and advancing the demand for freedom for Palestinian political prisoners.” (samidoun.net, Jan. 28)

Al-Awda, the Palestine Right to Return Coalition stated in part: “In reality, Trump’s ‘deal of the century’ is an attempt to legitimize the current status quo in Palestine by giving the title [of] ‘statehood’ to these apartheid Bantustans, precisely the same tactic attempted by the apartheid South African regime and rejected by the world. It is as clear as ever, and perhaps more than ever, that the United States as an imperialist power and the Israeli entity as a colonizing regime have declared identical interests in the continued colonization of Palestinian land and destruction of Palestinian rights.

“The Palestinian vision remains clear: self-determination, continued resistance to colonization and occupation, the return of all Palestinian refugees, the liberation of Palestine, full rights and equality for all of our people, dismantling Zionism, Jerusalem as the capital of one liberated Palestine, from the river to the sea. Palestinians have been struggling for over 100 years, and Trump, Netanyahu, Kushner and their ‘deal’ will never liquidate the cause and the rights of the Palestinian people.”  (al-awda.org, Jan. 30)  Al-Awda initiated emergency demonstrations in New York, Houston and Los Angeles.

Susan Abulhawa, a well-known Palestinian activist and writer, told Workers World: “Kushner is a Zionist who for years has been sending millions of dollars for Jewish-only settlements (considered a war crime under international law). He received $30 million from an Israeli firm while this ‘deal’ was being drafted.  He’s part of a decision that will decide the fate of Palestinians, an ancient Indigenous society that has lived continuously on that land for thousands of years.”

Abulhawa went on to say: “Kushner’s stated qualification for being in a position of such extraordinary power is that he read 25 books. Donald Trump appears to have read nothing and didn’t know the name of Al Aqsa mosque, embarrassingly calling it ‘Al Aqua’ Mosque in full view of the world.  The so-called deal of the century is exactly what you would expect from two ignorant rich white men with enormous power colluding with a modern settler colonial project that has one of the worst human rights records in the world.”