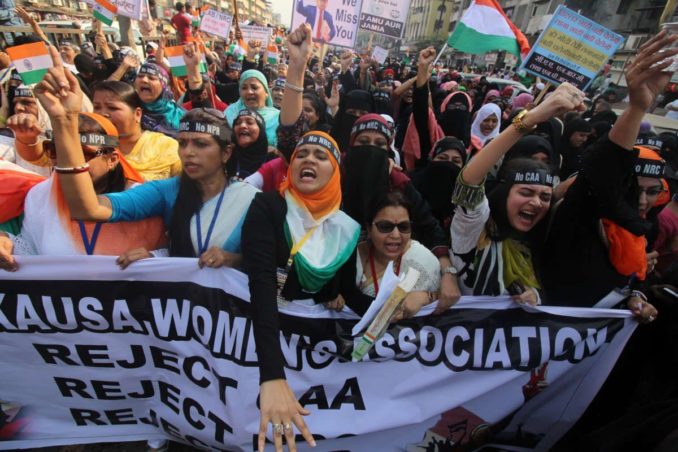 Members of the Mumbra-Kausa Women’s Association shout slogans during a protest against the Citizenship Amendment Act, National Register of Citizens and National Population Register on the outskirts of Mumbai on Jan. 26.

Hundreds of thousands of people protested on Jan. 26 across India and in many cities abroad to oppose the Citizenship Amendment Act and National Citizens Registry that Prime Minister Narendra Modi is pushing. The CAA would deny citizenship to India’s 200 million Muslims, and the NRC would create a national registry. Those who do not register would not be considered citizens.

Tens of thousands of protesters formed “human chains” that stretched for miles in several Indian cities. A protest in Mumbai, the financial hub of India, drew 20,000. Women led many of the actions, including an all-woman demonstration of 20,000 in a suburb of Mumbai. In the midst of another mass protest in New Delhi, Modi held a military parade and feted Brazil’s fascist President Jair Bolsonaro.

Jan. 26 is celebrated in India as Republic Day, marking the day the country’s constitution went into effect.

There were huge demonstrations in 30 U.S. cities, including Atlanta, where 1,000 marched from CNN to the National Center for Civil and Human Rights. Another big protest took place in Washington, D.C., while the largest was reportedly in Chicago, where participants formed a huge human chain.

Thousands of demonstrators marched in London, organized by United Against Fascism in India, despite efforts by the Modi regime to get the British government to ban the protest.