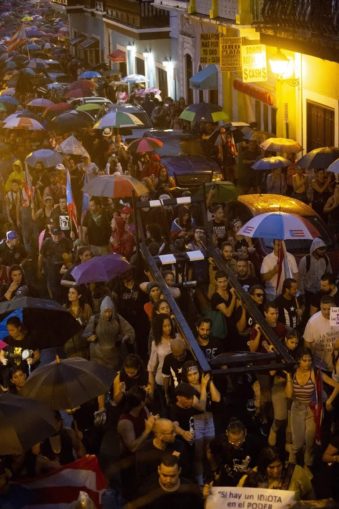 Protesters carried a guillotine aloft as they marched in Old San Juan Jan. 23.

Still grappling with the aftermath of devastating earthquakes, Puerto Ricans reacted with protests when they learned Jan. 19 that massive amounts of vital material aid have been warehoused since 2017. The aid arrived after two major hurricanes struck the Puerto Rican archipelago that year.

The donated aid included generators, emergency radios and batteries, portable stoves, mounds of blue tarps to replace lost roofs, baby diapers and more. Pallets of water and food, including “Ready Meals” with signs “FEMA, Not for Resale” — much of it held past due dates — were also uncovered.

The warehouse in Ponce holding these goods suffered structural damage. Ponce is one of several cities in the main island’s southeastern region that was hardest hit by the earthquakes. Gregory Gonsalez, mayor of Peñuelas, whose city was impacted by the quakes, said, “We have a mountain of lost supplies, and people are suffering.” Gonsalez expressed certainty that the Ponce warehouse may be one of many holding critical unused supplies. (Buzzfeed, Jan. 21)

Puerto Rico’s current Gov. Wanda Vazquez announced on Twitter that she had fired top emergency official Carlos Acevedo and others after news of the hidden supplies surfaced. Meanwhile, massive protests erupted denouncing the lack of aid from the U.S., the island government’s corruption and calling for Vazquez and Puerto Rican Senate President Thomas Rivera to resign.

Acevedo publicly stated that Vazquez, the head of the National Guard and other Puerto Rican officials were aware of the warehoused supplies. Buzzfeed reported that since 2017, Puerto Rico’s emergency management agency has rented facilities to stock supplies at the cost of $890,000.

Demonstrators have been massing outside the governor’s mansion and in front of the Capitol building in San Juan since Jan. 20 to demand an end to corruption. Carrying models of guillotines, waving flags and banging on pots, protesters chant: “Where is Wanda?” “Wanda! Turn over the disaster supplies” and “Let them rot in jail.” (AP,  Jan. 20) On Jan. 23, police used tear gas to disperse demonstrators gathered in downtown San Juan.

Earlier in January, Puerto Ricans in the diaspora held demonstrations in cities around the globe. The protests criticized the Trump administration for refusing to release $18 billion in post-hurricane aid slated for the U.S. island colony. Without citing a valid reason to deny the Congress-approved aid, Trump has delayed upgrades that would repair the island’s infrastructure, which is still severely damaged by hurricanes Maria and Irma.

All these demonstrations come roughly six months after intense anti-government protests on the island in July 2019 forced the resignation of former Puerto Rican Gov. Ricardo Roselló. Millions participated in protests at that time, and a general strike shut down one of Puerto Rico’s major highways, which made it impossible for Rosello to stay in office.

The government of Puerto Rico was then in chaos, as elected officials scrambled to find a successor to Roselló. In less than 20 days, two newly appointed governors were also forced to resign, leaving Vazquez next in line.

The rapid and sloppy secession of the island’s governors brought no benefit for the people, but was instead a concession to the Puerto Rico Oversight, Management and Economic Stability Act (PROMESA), a Wall Street-driven austerity program the Obama administration forced on Puerto Rico in 2016.

Beginning earlier in 2019, scandals resulting in arrests of several officials appointed by PROMESA left colonial puppets of the capitalist class in complete disarray. PROMESA was designed to restructure the debt acquired by the Puerto Rican government over the last several decades. The plan was simple — unrelenting austerity.

PROMESA board members, all unelected, unleashed a plan of crushing budget cuts resulting in school closures and underfunding, cuts in pensions and health care, a severe reduction in hourly wages, destruction of the island’s infrastructure — including its power grid — and more. Driven by PROMESA, the island’s debt continued to pile up. Its economy never recovered.

The two devastating 2017 hurricanes killed over 3,000 people in Puerto Rico, leveling entire neighborhoods and destroying much of the island’s infrastructure.  With the population still in recovery, the Dec. 28 magnitude 4.7 earthquake, followed by a swarm of some 950 quakes so far this year, have terrorized residents and compounded recovery problems. (tinyurl.com/voktjjx)

Yet it was Wall Street’s intentional economic destruction of this U.S. colony, purposely underfunding and causing the mismanagement of much of the island’s infrastructure, that must be understood as the underlying reason why the physical destruction has rendered the island ungovernable. The struggle in Puerto Rico is a struggle against imperialism.

The impact of hurricanes, earthquakes and Wall Street bankers may seem insurmountable. But in the end, the power of the people is extraordinary and, when concentrated, its force can overturn any empire.