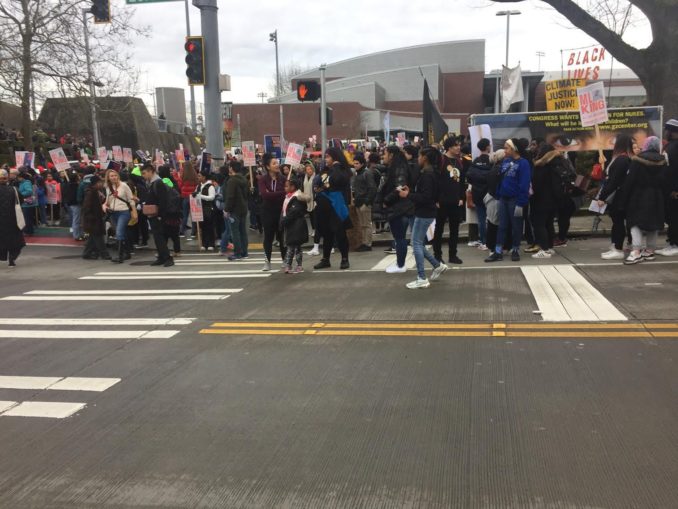 The 38th annual march celebrating the legacy of the Rev. Dr. Martin Luther King Jr. on Jan. 20 was larger than usual this year.  The racism and hatred spewed by President Donald Trump and his political allies, and the crisis of poverty faced by so many people, no doubt motivated many demonstrators to participate.

There was agreement among the crowd with this statement made from the podium: “We can make the Trump era the final thrust of the beast of white supremacy!”

The march and rally were part of an all-day program, organized by the Seattle MLK, Jr. Organizing Coalition. There was a morning job and opportunity fair at Garfield High School in Seattle’s historic Black community, followed by 26 workshops dealing with social justice issues and then a midday rally in the gym. A youth cultural rally was held the day before.

The Duwamish Nation, the first people of Seattle, welcomed demonstrators to the event. A representative of the Muckleshoot Nation was thanked for a large donation to the march. Singer Josephine Howell led the crowd in singing the Black national anthem, “Lift Every Voice and Sing.” Michael  “Quess” Moor from Take ‘Em Down NOLA gave a spoken word performance about their grassroots struggle which led to the removal of four white supremacist monuments in New Orleans.

Speakers also honored local veterans of the Civil Rights struggle, including the late Jacquie Jones-Walsh, a “pillar of the community.” She was vice president of the local Coalition of Black Trade Unionists and the Martin Luther King Celebration Committee and served on the executive board of the Washington State Labor Council.

Honoree Larry Gossett spoke at the rally. He recently retired from his 25-year stint as Martin Luther King County councilperson. Gossett helped found the Black Student Union and worked on the struggle that won affirmative action for students at the University of Washington.

In 1983, community leaders exposed the fact that King County had been (outrageously!) named after William Rufus DeVane King, a member of one of the largest slave-owning families in Alabama. He was also vice president for six weeks in 1853 in President Franklin Pierce’s administration.

Along with other members of the Black community, Gossett was a key organizer in the struggle which pressured the government to rename Seattle’s King County after Martin Luther King and to put Dr. King’s picture as a logo on all Metro buses and other county properties.

On the way to downtown Seattle for another rally, the multinational march, which included a large youth contingent, detoured to protest a new jail for youth being built in the Black community. Members of UNITE HERE, who are fighting attacks on their livelihoods at the Edgewater Hotel, marched alongside members of the Machinists union who work at Boeing.

The marchers stopped at Swedish/Providence Hospital to hear hospital workers speak. Members of SEIU Healthcare 1199 NW appealed to demonstrators for support in their struggle against severe staffing shortages and low wages. Some 8,000 workers from three unions are set to strike from Jan. 28 to 30 at the giant hospital chain. It is anticipated that thousands of workers from around Washington state could join this unfair labor practice strike.

As the protestors continued on to the King County Correctional Facility, a large banner displayed near the front of the march read: “Cops and King County jail guards are brutalizing womxn and girls: Black Womxn’s Lives Matter!”

Outside the penal facility, activist Nikita Oliver denounced the jail as “a place where Black and Brown people are disproportionately locked up for crimes of survival.”

The march ended at City Hall Park where Gossett explained: “The reason we are congregating here is because homeless people, our own people, hang out at this park.”

A community meal was provided for everyone at Garfield High School after the march. An atmosphere of solidarity and unity prevailed among those who participated in the day’s activities.