Since a new strain of pneumonia-causing virus hit China in late December, there has been a massive response by the central and local governments.

On Dec. 31, China alerted the World Health Organization that it had detected a pneumonia-like illness in Wuhan, a city of 11 million people in central China’s Hubei province.

By Jan. 7 the cause was identified as a novel coronavirus, dubbed 2019-nCoV, which is in the same family as the common cold and SARS. Two days later the Chinese Center for Disease Control had sequenced the entire genome of the virus, a rapidly achieved feat that will help scientists around the world more fully understand it. 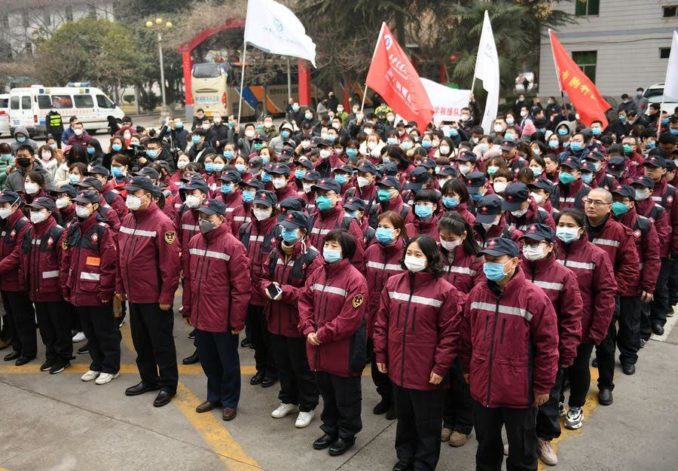 A medical team from 51 medical institutions in Shaanxi leaves Xi’an for Wuhan.

For comparison, during the 2014 outbreak of Ebola in West Africa, it took scientists two months to completely sequence that virus’s genome.

Data from Chinese scientists have been published in international medical journals, such as the New England Journal of Medicine and the Lancet, as well as in the domestic journal China Science Life Sciences.

China’s response to the outbreak has been swift and massive. In cooperation with WHO and the international scientific community, it is taking this outbreak very seriously.

“Party committees and governments at all levels must take novel coronavirus outbreak prevention and control as the top priority of their work,” said President Xi Jinping at a Jan. 25 meeting of the Central Committee of the Communist Party, which set up a high-level task force to combat the virus. Led by Premier Li Keqiang, the task force arrived in Wuhan on Jan. 26 to coordinate efforts to contain the outbreak. As of Jan. 27, the Ministry of Finance has allocated $8.74 billion to combat the virus.

Wuhan and several other cities have been put under partial quarantine, shutting down public transit and restricting travel by private cars, even as Chinese New Year/Spring Festival celebrations kicked off what is the largest annual human migration in the world.

This is an unprecedented response to a viral outbreak. Free-market capitalist countries have been inhibited from taking similar measures because of how greatly such a move would disrupt their markets and profits.

The Spring Festival holiday will be extended, with schools and many public facilities remaining closed, to slow the spread of the virus. The China Banking and Regulatory Commission announced it is freezing payment obligations on mortgages, loans and credit cards for those who do not have an income due to the outbreak. This is unheard of in Western capitalist countries, where every flu season many are forced to go to work sick or face deep debts and even homelessness.

The government plans to complete two entirely new hospitals in six to seven days to deal with patients, beating a previous record set in Beijing during the 2003 SARS outbreak. Using prefabricated buildings and an army of workers — who are being paid three times the usual wage — the Leishenshan Hospital will have nearly 1,500 beds, while the Huoshenshan hospital will have up to 1,000 beds.

The two new hospitals are being built by state-owned firms and financed by China’s public banking system, allowing for a swift and coordinated response that can focus on meeting the public’s needs instead of extracting short-term profits. Unlike capitalist companies, state-owned firms can operate at a loss.

State-owned Telecom China Mobile has set up a special 5G network in a Wuhan hospital to facilitate telemedicine, which will reduce exposure of medical workers to the virus. Factories have been ordered to massively increase production of medical supplies, like masks and gloves, after some shortages of these items were initially reported. Prices for these items spiked, but e-commerce giant Alibaba announced it would work to eliminate price hikes.

No response to an outbreak like this will be perfect, but on-the-ground reports attest to the efficiency and seriousness with which it is being handled. This reporter spoke with Victoria Sinclair, a U.S. citizen living in the city of Dalian in northwest China. She said, “I’ve always been impressed with how quickly Chinese construction workers manage to work. Our highway was done in a few weeks, and I have no doubt the new hospitals they are building in Wuhan will be done quickly.” Sinclair added, “The buses and subway are still running in our city, but they [workers] are taking extra precautions and sanitizing them twice daily.”

Coverage in the Western media has been largely negative, portraying China’s response as inept and lacking transparency, despite the central government calling on all cases of the virus to be immediately reported and several local officials in Wuhan facing repercussions for not acting swiftly enough. That doesn’t sound like the central government is trying to cover up the outbreak; yet it has been a major talking point in Western reporting.

Despite the rapid and massive measures China has taken — only possible in a country with large amounts of public ownership, economic planning and leadership of the Communist Party — the Western media seem largely devoted to only criticizing China.

It should be remembered that the Reagan administration not only ignored the AIDS crisis in the 1980s but mocked and ridiculed the tens of thousands of people dying from that deadly disease. And during the 2017-18 flu season in the U.S., more than 60,000 people died — a fact rarely mentioned — which puts China’s current outbreak into perspective.

The current U.S. flu season has already seen over 6,000 fatalities, presenting a much greater threat at present to public health than the coronavirus. Yet the Western corporate media, driven by an endless need for more viewers and more advertising revenue, choose to put forward a sensationalist narrative regarding China — to grab people’s attention and generate more clicks.

Resurgence of diseases in U.S.

There has been a resurgence in the U.S. of leprosy and typhus in Los Angeles’s homeless population and measles and mumps in unvaccinated people.

The U.S. actually has a lower vaccination rate than the Socialist Republic of Vietnam, which has a much smaller population and economy so it can spend much less on health care. A 2016 study published by the National Institutes of Health investigated vaccination rates of children living below the poverty line in four states and found that 40 percent had not received a single dose of the vaccine for rotavirus. Before introduction in 2006, rotavirus caused 20 to 60 deaths a year among children and up to 70,000 hospitalizations.

Racism is also apparent in how little concern Western reports seem to have for the well-being of non-Western people hit by a deadly viral outbreak. While the accidental burning of Notre Dame in Paris and the massive wildfires in Australia both brought out public displays of sympathy and huge donations from Western corporations and billionaires, China’s coronavirus outbreak has not garnered the same sympathy and support.

This is the inevitable result of a new Cold War being waged against China as the imperialist West attempts to hold on to its position as the global power center.