Activists — unsheltered and sheltered — finally saw a response to their demands on Friday, Jan. 17, when the mayor’s office announced a plan to open a city-owned building for use as a temporary winter shelter. This was the first concession to demands issued by the Take Shelter Coalition at a City Council meeting protest last November.

This followed the closure of the largest and most centrally located shelter for unhoused members of the working class. A solidarity encampment begun in January to continue demands has been violently dispersed by police.

The new shelter is slated to provide 145 beds and has been scheduled to remain open until sometime in April. The 145 beds still fall far short of the number of beds eliminated by the shelter closing. Beside replacement beds, more demands need to be met. 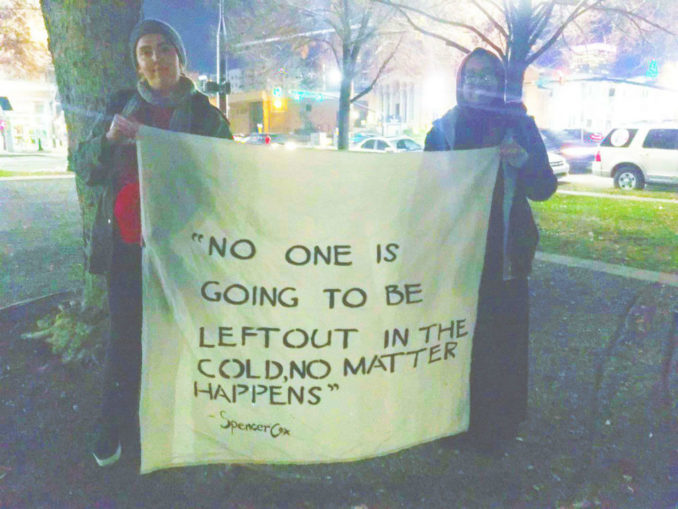 A statement issued by the Take Shelter Coalition made clear that the struggle for housing and against police brutality and harassment is continuing:

“Salt Lake City announced tonight that it will open a temporary shelter in Sugarhouse. Just two days before [Mayor] Erin Mendenhall was inaugurated, a camping occupation in Washington Square Park — Operation Take Shelter — was forcibly and destructively shut down by the police. That occupation was formed by the Take Shelter Coalition to serve our unsheltered neighbors and to draw attention to our five demands for city and state officials.”

The five demands by the Take Shelter coalition are:

The statement continues: “They may have shut us down, but we know that they could hear us. Today, Mendenhall announced the opening of a temporary shelter in Sugarhouse. Still, none of our five demands has been met.

“This new shelter is far outside the downtown area where services are nearby. With the announcement that the Weigand Center warming station will now be closing overnight, that means that there will no longer be a warm place for anyone downtown to stay. So, if a person misses the evening shuttling from the Weigand Center, they are stranded with nowhere to go for warmth.

“Before the Road Home closed, it could sleep 1,100 people every night. The new centers only hold 700. That means that even with this additional 145 beds, we are still 255 beds short. With this kind of deficit, there will continue to be people left outside in the cold. Our city needs an equivalent number of beds to ensure that people have access to a warm place to sleep.

“It is essential that the police department immediately end the ticketing, harassment, and arrests of unsheltered people. The cops have spent all winter stealing people’s survival belongings, and no new shelter can ever make that okay.

“With every shelter falling outside the free fare zone, our demand for free public transit fare for all people staying in shelters remains critical.

“This crisis is the result of corruption, mismanagement, and systemic negligence by the city and state. Each one of our demands is essential, and we also know that we need real change, not reluctantly given crumbs. They shouldn’t only be addressing emergency shelter, they should also be mitigating the risk we all face because of their housing policies. They could do so by implementing the recommendations that the Kem C. Gardner Policy Institute presented at their fact-finding session, and also by implementing the recommendations presented by the ACLU regarding their use of police. These are outside the scope of our demands, but exactly within the scope of their responsibilities.

“This is not good enough. We will not be silenced by police repression or by state compromise. We will continue to fight for shelter and dignity for all people.”