A historic press conference was held at the Kingsessing Library in West Philadelphia on Jan. 21 to officially welcome home MOVE 9 activist Delbert Africa from his over 41-year imprisonment. The room was packed with press, MOVE supporters and several people who had witnessed the police siege and attack on MOVE’s Powelton Village home that led to Delbert’s 1978 arrest.

Pam Africa, Minister of Confrontation for the MOVE organization, stated, “While this was the first press conference we’re having concerning Delbert’s release, there will be more press conferences as we have more people coming home.” Several speakers noted that MOVE 9 member Chuck Africa expects to be released soon. Court appeals for Mumia Abu-Jamal are in progress.

Pam Africa introduced MOVE members Consuela Africa, Carlos Africa and Sue Africa, noting the number of years each had been imprisoned by the state. With them was Delbert’s daughter, Yvonne Orr-El, and Ramona Africa, the sole living survivor of the state’s infamous bombing of the MOVE family house in 1985 — who Pam introduced as “Fire Walker.”

They were later joined by Fred Hampton, Jr., whose father, Fred Hampton, a leader of the Black Panther Party, was murdered by Chicago police on Dec. 4, 1969. 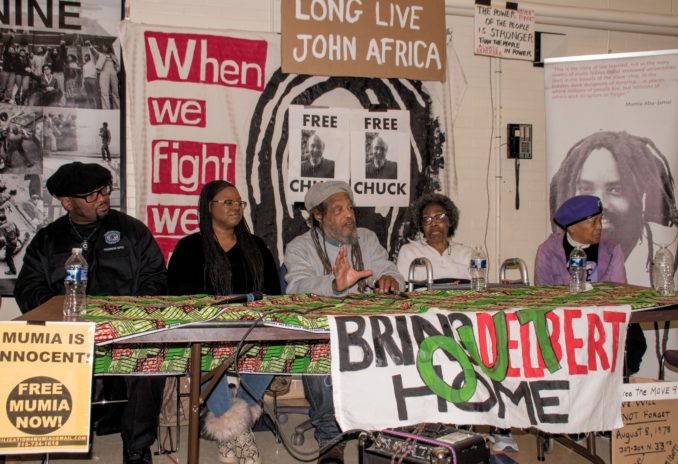 ‘It lifted me right up’

Delbert began, “My name is Delbert Africa and I’m out here free and feeling good – any questions?” He contrasted his experience of four decades of imprisonment with being in the midst of family, friends, supporters and loved ones. “It lifted me right up,” he said.

Delbert recalled his time in prison with Phil Africa, who died while incarcerated. MOVE 9 member Merle Africa also died in prison. Delbert said, “I wish Phil and Merle could be here with us today.  Once we get Chuck Africa out and free Mumia, we’ll have all our MOVE family with us.”

Since being released from Pennsylvania’s State Correctional Institution Dallas on Jan. 18, Delbert has yet to formally meet with his parole officer.  He addressed the issue of parole restrictions: “The system always throws barricades onto people being and working together. The judge who sentenced us in 1978 threatened us as a family. He gave us 30 to 100 years, and they kept denying us parole saying: ‘You have no remorse.’ But they had no remorse for what they did to our family in 1985. We have no regrets because we were innocent in 1978.”

Delbert continued: “As a family and organization we are still on the move. They claimed we were violent — but we were trying to eliminate violence in our community, trying to stop the exploitation. You live over there with eight houses, yet I live here in a tent. We’re trying to stop that. The system wants to push people down, oppress you, but John Africa taught us that we don’t have to take it anymore. It’s been a long time caught up on somebody else’s schedule, but now I’m back on MOVE’s schedule.”

Delbert told the audience about the confrontation with Philadelphia Police Commissioner Frank Rizzo in May 1977: “MOVE was peaceful, but we were suffering brutality at the hands of the police — so brutal that they physically kicked a baby out of the womb of one MOVE member and murdered Janine Africa’s baby, Life Africa. We made up what people thought were weapons so we could make an impression on city officials who saw a bunch of primarily Black people rescuing animals and growing our own food in an area of Philadelphia where the University of Pennsylvania and Drexel wanted to expand.

“Rizzo went nuts and started a blockade — not so much to keep us in but to keep community supporters out,” Delbert explained. “But the neighborhood responded and brought us food. The city tried to evict us. They got warrants naming people who never lived in the house.  But just because it’s legal, don’t make it right. Slavery was also ‘legal.’ ”

Delbert related the events of Aug. 8, 1978:  “Neighbors warned us that police were surrounding the house. We got the children and everyone into the basement. They emptied water cannons into the basement. At a press conference after the attack, police bragged about emptying rounds of machine gun fire into the house. During the attack I was shot in the chest, but was able to come out of the house through a window.”

Delbert described the immediate police attack on him when he went outside the house: “One cop hit me with a steel helmet on one side of my face. Another cop used his shotgun against my head to break my jaw. One cop pulled me by my hair across the street where they all started to jump on me, beating me. Their excuse was to claim I was armed, but I had removed my shirt and was naked from the waist up.”

Supporters shout:  ‘On the MOVE!’

“At the hospital they removed the shotgun pellet from my chest without using anesthesia,” Delbert stated. “But when I finally got moved to the Round House [police headquarters], there were literally 20 or more people from the neighborhood yelling, ‘On the MOVE!’”

MOVE 9 members were sentenced collectively in connection with the death of Police Officer James Ramp, who was off-duty then and had not been assigned to the scene.

“We thought he came there for the chance to kill some Black folks,” Delbert said. “On Aug. 9 and Aug. 10, newspapers reported that firemen who were facing our house complained about gunfire coming in from behind them. None of the MOVE people had any gun residue on our hands.”

Community activist Walter Palmer, who was in the audience, backed this up: “I was facing the MOVE house and heard gunshots from behind me. I had to hit the ground to avoid being shot. James Ramp was standing outside by a corner of the house. MOVE never killed officer Ramp, and MOVE did not shoot first.”

Several people who attended the press conference were residents of Philadelphia’s Powelton Village during the police siege and shootout. All of them told of MOVE’s support for the people in the community. Those who spoke seemed to welcome Delbert’s release as an opening for them to finally tell their own stories.

Yvonne Orr-El spoke about her mother who was an official in the Chicago chapter of the Black Panther Party. Orr-El told of the circumstances of her birth on the side of a lake as her parents fled police threats against BPP members in Illinois. When she was nine years old, she was traumatized in school witnessing television coverage of her father being dragged from the MOVE house and brutally beaten by police.

Palestinian activist and writer Susan Abulhawa, who was in the audience, welcomed Delbert home on behalf of Palestinian people.  She expressed solidarity from the people of Palestine to the MOVE organization, stating: “The MOVE family is not just a local struggle. It is an international struggle. My people in Gaza live in an open-air prison. We are with you.”

Editor’s Note: Fred Hampton, a Black Panther Party leader, was killed in an assault by COINTELPRO forces on Dec, 4, 1969. On Sept. 11, 1971, leaders of the Attica Prison Uprising presented demands of the incarcerated men to the state of New York, which then launched a massacre of inmates. The Philadelphia Police Department orchestrated the brutal attack on the MOVE family and house on Aug. 8, 1978. The state bombed the MOVE house, killing 11 members of the family, including five children, on May 13, 1985.