Garcia is Colombian, residing in Spain. Published in lapluma.net on Jan. 1. Translation by John Catalinotto

For the people’s movements in Latin America and the Caribbean to come out ahead, achieving a high degree of political awareness and organization is insufficient — as long as the ruling classes, in one form or another, maintain control of the armed forces.

When the traditional political system collapses, and its energy is exhausted, it is possible for popular movements to gain control of the government — in whole or in part — from those ruling classes. This certainly happened in Venezuela and Bolivia. It is quite different, however, to take economic power away from the ruling class — and media power, which is closely linked to the latter — although forms of state capitalism in popular hands allow fairly wide leeway for carrying out fundamental political and social reforms. 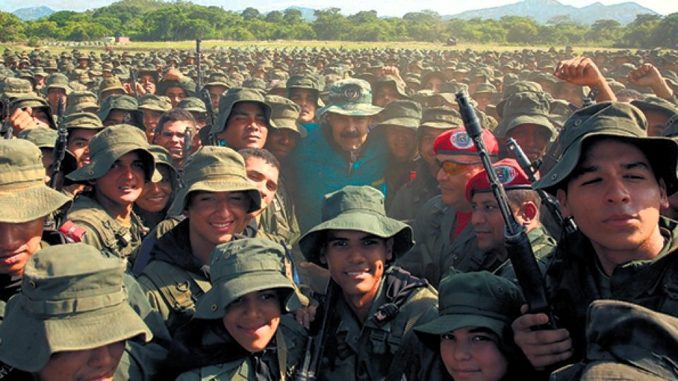 President Nicolás Maduro with soldiers of the National Bolivarian Armed Forces in El Pao, Venezuela, May 2019

Of course, there always remains the greater challenge — which is, based on this state capitalism — to construct an essentially different economic order, one that allows the country’s economy to overcome its condition of playing a complementary, dispensable and secondary role in the complicated web of the world market. When the country has abundant natural resources, it will become a priority target for imperialist aggression in the struggle to secure raw materials, markets and areas of influence. This danger is by no means small.

When, on the other hand, material and human resources are scarce or very limited, the challenge is even greater. Only nations that are very rich in resources or are of continental dimensions — such as Brazil or China — have the advantage of having the right material conditions for pushing a project forward that is at least nationalist — in the [progressive] sense of the word — and better still, though not necessarily, a project of broad and deep social reforms.

‘Power from the barrel of a gun’

Fortunately for those countries on the periphery of the system, there will always be intermediate strategies that will make it possible to overcome limitations and deal with internal and, above all, external threats. There is, however, one challenge that cannot be ignored: military power.

It is not enough for these popular, democratic and nationalist movements to have an organized and conscious mass movement or a program of adequate reforms that will give solidity to the project. Nor is it enough to have a political vanguard with sufficient confidence in a leadership that is up to the challenges. All of this combined is still incomplete.

As the Chinese poet and strategist pointed out, those who undertake processes of radical change must never forget that “in the final analysis, political power grows out of the barrel of the gun.” [Quote from Mao Zedong, founding leader of the People’s Republic of China, in “Problems of War and Strategy” – WW]

A review of recent events in Latin America and the Caribbean shows how political regimes and social orders that have deeply deteriorated have lost all their legitimacy — as in the recent cases of Chile, Ecuador, Haiti and Colombia —  and have awakened enormous popular mobilizations that demand radical changes of the entire order.

The people demand the departure of the current rulers, promote a new constitutional order and emphatically reject and unreservedly condemn neoliberal economic policy, police repression and the media manipulation promoted by the existing governments and by national and foreign economic interest groups. (Only those forces deny imperialist intervention who want and need to deny it.)

These popular demonstrations also raise new banners that reflect the most recent popular demands — the defense of the planet plundered by capitalism, the demand for gender rights in their various aspects, the dignity of Indigenous peoples, national dignity.

But neither the breadth of these movements nor their obvious legitimacy have succeeded in ending the reign of neoliberalism. Neither in Chile nor in Colombia or Haiti  — where the people have been constantly protesting — nor in Ecuador, which seems to be in a moment of suspension, do the current rulers seem willing to give in.

In the existing regime’s most critical moments, when everything seemed to indicate that the head of state’s time had come to resign, a clear and emphatic voice saved the old system: the voice of the barracks and the police club, with a [large number] of dead, wounded, prisoners and disappeared that had not taken place for decades — except perhaps in Colombia, a “democratic” country where repression has always continued. There, the military operates not only outside the law but with total independence from government control.

Only Venezuela seems to have resolved this dilemma — by literally purging from the ranks of the military and police those elements who resist progressive change and lack any truly nationalistic inspiration, lack any sense of national loyalty.

That is why the many attempts at coups d’état, or using the barracks in defense of the traditional ruling class and foreign interests, have so far failed there, to the point that Washington and its European allies seem to have given up on getting Venezuelan President Nicolás Maduro out by force of arms and are now proposing a “negotiated way out.”

This is a huge challenge. As long as the military and police are not at least neutralized, the mass popular movement always faces the danger of defeat — even if the movement has considerable breadth, high levels of consciousness and organization, and full legitimacy.

However difficult this challenge may be, it is possible to overcome. It would not be the first time that from the barracks a group of nationalist and progressive military and police forces has allowed the people’s movement to achieve its objectives.

Great reforms on the continent have been promoted by groups of nationalist military officers — in Argentina (Juan Perón), Brazil (Getúlio Vargas), Mexico (Lázaro Cárdenas and Plutarco Elías Calles) and Peru (Velasco Alvarado). These advances occurred despite the subsequent fate of each of these revolutions, which deep down revealed the weak constitution of a true national bourgeoisie and the popular movement’s insufficiency.

No doubt these have been exceptional cases, but their impact on the history of the region is immense and shows that those in the barracks do not always react to popular protest — and the desire for change — by shedding the blood of the people.