When President Trump ordered the assassination of Iranian Gen. Qassem Soleimani in early January, tens of thousands of people protested in over 80 cities across 38 U.S. states. While Trump has since stepped back from pushing all-out war in Iraq and Iran, he has issued executive orders increasing deadly sanctions against the people of Iran. The Pentagon is also refusing to comply with the decision of the Iraqi Parliament for the withdrawal of U.S. troops. 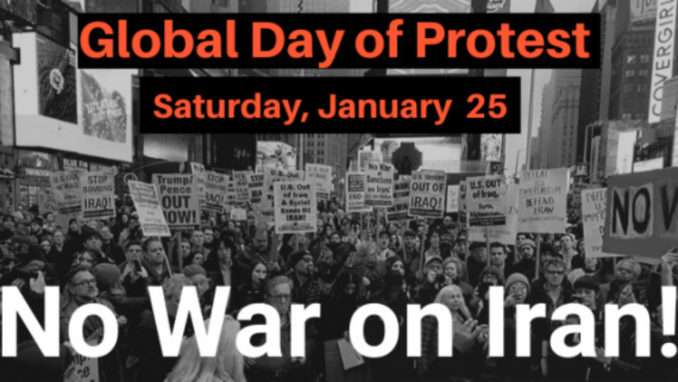 The danger of war is far from over and the need for a much larger anti-war movement is clear. U.S. aggression against Iran and continued occupation of Iraq still threaten another disastrous, bloody war.

On Jan. 25, actions will take place around the world to oppose a new war in the Middle East.  Organizers are encouraging all those opposed to war to turn up and speak out. Actions are already scheduled in over 70 U.S. cities and in a dozen other countries.  A list of scheduled mobilizations can be found at tinyurl.com/we555kt/.

For more information, go to tinyurl.com/yx7f7gxx/.