Jan 7–Enormous demonstrations in Iran, Iraq and region-wide are expressing anti-imperialist rage, and signaling a new day, a rebirth of mass movements that will drive the U.S. out of the region. 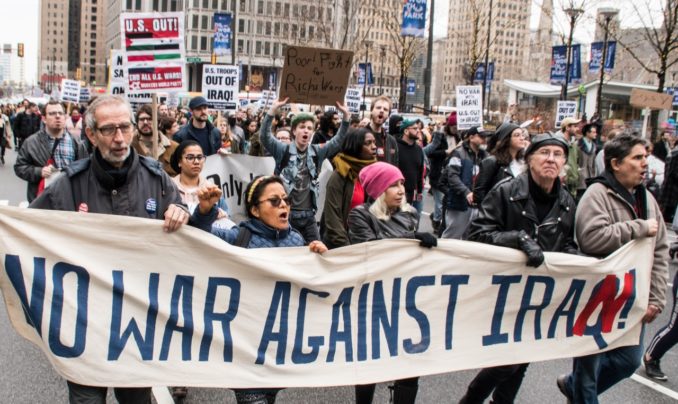 A criminal U.S. act has kindled this firestorm.

Soleimani was on an official visit to Iraq, really on a mission to negotiate for peace. He was met by Abu Mahdi al-Muhandis, the leader of Iraq’s Popular Mobilization Forces (PMF), who was also murdered in the drone attack. The PMF are officially part of the Iraqi Security Forces.

In the days after this war provocation, the following has taken place:

In Iraq, tens of thousands joined a funeral march for the two military leaders murdered by the Pentagon. The Iraqi Parliament voted to expel the 6,000 U.S. troops that have been stationed in Iraq after its members heard evidence of a U.S. political assassination violating Iraq’s sovereignty.

Iraqi Prime Minister Adil Abdul-Mahdi had told the parliament that the U.S. government knew that Gen. Soleimani was traveling to Iraq as an official peace emissary to meet with him as part of negotiations with Saudi Arabia to de-escalate tensions in the region. Iraq was to act as mediator. Abdul-Mahdi said that Trump had also asked Iraq to play a mediating role with Iran.

In Iran, government leaders have promised that they will strike back at the U.S. and that it will be a military strike. Hundreds of thousands, if not millions, of people have marched in the streets in mourning for Soleimani and his Iraqi counterpart. A favorite chant was “Death to America!” — meaning the United States.

From the U.S., Trump has sent a tweet threatening to destroy 52 Iranian cultural sites. Such an attack would be a war crime. Meanwhile, Washington has instructed U.S. citizens to leave Iraq.

While the events have exposed some of U.S. imperialism’s weaknesses in Iraq and the region, they have made a major U.S. aggressive war more likely.

Trump’s latest escalation follows a humiliating experience in Baghdad — on the very last day of 2019. An unarmed funeral procession of thousands walked unopposed past guard posts, layers of blast barriers and checkpoints into the most highly secured U.S. embassy compound in the world.

Iraqi government security forces did nothing to block militia members and their leaders from entering the heavily fortified Green Zone where the U.S. Embassy is located.

This bold action followed a mass funeral for members of Popular Militia units who had been killed in a U.S. bombing. It exposed the vulnerability of the U.S. occupiers.

That embassy action sent a clear message: No U.S. base in Iraq is secure.

The very Iraqi forces the U.S. relies on, in the most heavily fortified embassy in the world, opened the door. Clearly the U.S. has no allies. Even the Iraqi forces who collaborated have aligned against the U.S.

Since then, the U.S. escalation included the well-publicized arrival of U.S. troops from the 82nd Airborne Division in Kuwait, troops often used to evacuate U.S. citizens. Thousands of other troops are on their way in anticipation of a wider war.

The role of U.S. imperialism is destructive all over the world. Nowhere has it been more destructive in recent decades than in the countries of the area from West Asia to North Africa that many call the Middle East.

As the U.S. ignites a crisis, this is an important time to evaluate the U.S. position, its strength and its alliances, and evaluate the developments of peoples’ movements for sovereignty in the whole region.

The Green Zone is a U.S.-created security bubble, a self-contained colony taking up 4 square miles of central Baghdad. It is surrounded by concrete blast walls and barbed wire fences fortified by sandbags, spotlights and checkpoints.

The U.S. Embassy, within the Green Zone, occupies more than 100 acres of prime real estate. It is about the size of Vatican City. Six times larger than the United Nations headquarters in New York, it is the world’s largest embassy.

That the most highly trained Iraqi security forces, supposedly trusted to guard U.S. interests, made no effort to stop the protesters as they marched into the heavily fortified Green Zone is a stunning development. It sends a message about the security of every U.S. base in Iraq.

The Green Zone takeover was not an isolated or exceptional event. Rather it was the third time during the last few months of 2019 that U.S. power had been successfully challenged in entirely new and creative ways — and in a region that has been brutally dominated, occupied and willfully impoverished by U.S. forces for decades.

The scale of these humiliating failures can best be appreciated when weighed against the grandiose promises of five consecutive U.S. presidents and some 30 years of failed U.S. sanctions, bombings and occupations that have tortured this region of vast wealth.

The Iraqi government is already weakened and divided by months of popular protests that have gripped Baghdad and the south of Iraq since early October.

Attempted crackdowns on demonstrations calling for basic services, employment opportunities and an end to corruption have resulted in at least 470 dead and more than 20,000 injured. The continuing protests have developed into demands for a complete overhaul of the corrupt and sectarian political system established under U.S. occupation.

In recent weeks, a series of rocket attacks has targeted military installations in Iraq where U.S. personnel are stationed. Occupation of Tahrir Square, also known as Liberation Square, was in force during the attack on the U.S. Embassy.

Public anger had exploded after the U.S. bombed militias known as Popular Mobilization Forces, which are officially part of the Iraqi Security Forces. The U.S. attack on Dec. 29 killed 32 and wounded 55 people who had been honored as front-line fighters against the Islamic State group (IS).

The U.S. said it launched the bombing in retaliation for a rocket attack on Dec. 27 near Kirkuk that killed a U.S. “contractor” (in fact, a mercenary). But the site the U.S. military chose to bomb was hundreds of miles from where the U.S. mercenary had died.

The area bombed was the only border crossing controlled by Iraqi and Syrian forces, not the U.S. The crossing had been opened with great celebration after being in the hands of IS forces for five years. Last September, Israel bombed Syrian forces trying to open this crucial highway crossing.

Opening this border post on the Syria-Iraq border meant that for the first time in 30 years, trade, travel and exchanges among Afghanistan, Iran, Iraq, Syria and Lebanon were potentially open and not under U.S. control.

U.S. strategy for decades has focused on how to keep this entire region divided, dependent and at war. Syria. Iraq and Iran were divided against each other as U.S. policy inflamed sectarian, ethnic and religious differences.

All these countries are under strict U.S. sanctions, so opening their ability to trade with each other is a huge, life-saving step forward. Knitting this destroyed region back together is a goal of those opposed to U.S. efforts to recolonize the area. By bombing this border crossing, the U.S. confirmed that its strategy is to forcibly divide the region.

Ever since Iran’s 1979 revolution, the U.S. has tried to crush it with sanctions. It also tightened sanctions on Iraq in August 1990, followed the next year by a massive bombing campaign plus sanctions that led to the death of half a million Iraqi children.

Then, in 2003, the U.S. invaded and occupied Iraq, destroying its social and cultural fabric. More than 1 million U.S. troops cycled through Iraq — but they could not subdue the resistance.

U.S. sanctions on Syria began at the same time the U.S. invaded Iraq in 2003. They became far harsher by 2011, with an all-out effort to overturn the Syrian government. Washington and its allies armed and supplied tens of thousands of foreign mercenary forces and then provided backhanded support to Saudi-created IS terrorists. IS became the new excuse for the U.S. military to bomb Syria and send troops into Iraq as “trainers.”

In Afghanistan, 18 years of U.S. occupation have brought only wreckage and sectarian division.

Nearly every political current in Iraq, Syria and Afghanistan, even those who collaborate with Washington, eventually have come to hate the duplicity and racist arrogance of U.S. domination.

The only Pentagon solution to the growing resistance on every front is more war and even harsher sanctions.

According to the Jan. 4 Washington Post, the U.S. has about 6,000 troops in Iraq with a brigade of 3,500 airborne troops arriving. There are over 14,000 U.S./NATO troops in Afghanistan. In Southwest Asia, from Afghanistan to the Mediterranean, there are a total of 70,000 U.S. forces. There are also tens of thousands of contractors and mercenaries in Iraq and Afghanistan.

Sending additional thousands of troops won’t change the U.S. inability to occupy and control a country, but it will escalate both the destruction and the resistance.

It is U.S. policy to blame Iran for every setback and form of resistance in the entire region. Iran, although severely sanctioned and surrounded, is the only country that has escaped direct U.S. occupation and massive destruction.

The Trump administration’s move to unilaterally cancel a legally binding accord, signed by the five permanent members of the U.N. Security Council plus Germany, to end the sanctions on Iran, has heightened tensions in the region. New U.S. sanctions imposed on Iran are an effort to destabilize the country with hyperinflation and shortages.

But Iran sent its own message as U.S. threats were escalated with the crisis in Iraq. It was a message the whole world took note of.

One fifth of the world’s oil passes through the Strait of Hormuz, which connects to the Gulf of Oman. On Dec. 27, Iran, China and Russia started four days of joint naval drills in the Indian Ocean and the Gulf of Oman.

The joint naval drill showed the determination to offer some protection to a region that has been openly looted by modern-day imperialist pirates. New trade deals and funds for rebuilding war-torn and sanctioned economies are on the drawing boards in Iran, China and Russia. It’s no longer a unipolar world.

Expensive U.S. weapons of little use

Saudi purchases of over $67 billion in U.S. arms, including the famous Patriot missiles, failed to warn of or prevent the attack. Saudi Arabia is the world’s third-highest spender on the military. Its inability to protect its most critical oil facility set off alarm bells. U.S. Patriot missiles might be paper tigers.

Low-flying, inexpensive weapons are a new challenge to Saudi defenses, which are designed for high-altitude missiles.

Unbowed resistance and an abiding hatred of U.S. imperialism are a material force now deeply rooted in popular movements throughout the region. They are finding creative, low-tech ways of resisting the all-powerful U.S. monolith. They are also developing new alliances that can enable them to rebuild.

Yes, the U.S. military machine and U.S. corporate power remain massive threats to many countries and an enormous waste of resources. The danger of an expanded U.S. war against Iran and Iraq, while continuing the wars in Syria, Afghanistan and Yemen, risks a global war that endangers us all. At the same time, events show that U.S. domination faces a fundamental challenge in 2020.

Every voice and the greatest unity are needed to demand U.S. OUT!