Published by tlaxcala-int.org and lapluma.net on Jan. 1. Aznárez is an Argentine Marxist journalist and the director of the e-magazine resumenlatinoamericano.org. Translated by John Catalinotto. 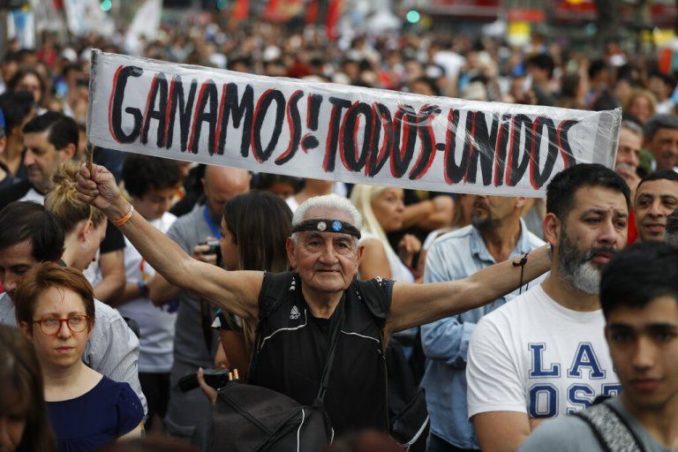 Argentinians celebrate an electoral victory over the right wing, Oct. 27, 2019, with the banner, “We won! All, united.”

There are years that seem to last so long that, according to the popular saying, they are like a century. Argentina has not been exempt from this comparison in this difficult 2019 that has just ended.

Such has been the burden of pain, suffering and signs of impotence that the population has had to endure because of the savage capitalism the government of President Mauricio Macri has imposed–even the smiles have been erased from the faces of many people.

It is not easy to describe the mood of the largest sectors of the population as the statistics rang in their ears every day. These generated a mixture of anguish and fury, especially since this government, which at last no longer exists, was imposed on them, not by military boots as in other times, but by the people’s vote — a vote rigged and manipulated. Ultimately it was voluntary.

Let’s go over some facts to get the picture. Macri left behind a final measure of poverty estimated at 35.5 percent. Beyond the percentages, this amount placed us once again in a scene that we had already witnessed in 2001: children eating from garbage pails; standing in endless lines with parents as hungry as their children; at the door of luxury restaurants when at midnight they dump the leftovers of the day’s meals into the street in large barrels — those leftovers that had remained on the plates of people who could still afford to have three meals a day.

Another familiar picture is repeated daily in slum neighborhoods, where, out of solidarity, social and popular organizations provide dining halls to feed thousands of mouths.

What can we say about inflation, which as never before has swept away everything that stood in its way — when at the end of the year the rate is 54.5 percent. This, as everyone knows, is not just one more piece of information; its repercussions hit the pocketbooks of the population every day, with astronomical prices, increases in fares for essential services and the constant rise in the price of gasoline and its derivatives, which in turn produce more increases in trips on public transportation.

Unemployment was another atrocious chapter in the Macrist era. The number of men and women who lost their jobs is around 400,000, and there are studies that put it at around half a million. The foreign debt, which is illegitimate from every point of view, is already very close to $300 billion U.S., which means that every Argentine is already in debt to the [International Monetary Fund] for about $6,310.

In every area during the last four years that could be analyzed, there have been gigantic setbacks, and in some cases the disappearance of historical conquests by the working class — both those of lower economic standing and those of sectors of the middle class, which the crisis has brought down several notches.

Education, health, housing are the sectors most affected by these policies that have not been applied only in Argentina, but are now being challenged in the streets by millions of people around the world. Examples of this challenge are in Chile, Colombia, Peru, Haiti, Panama — even in the France of Macrón and its capitalist right wing. [That country] has reached the end of this year with all its cities paralyzed by an unlimited anti-neoliberal strike. The constant and courageous weekly fight of the Yellow Vests Latin Americanized the rebellion in France.

The people are fed up. They go out to put their bodies on the line in a thousand possible ways, and Argentina was no exception. That’s why August was a key month to launch the battle and shorten a year that had been hitting the workers hard. The electoral explosion that the PASO [primary elections] signified and the 15-point lead of the Frente de Todos [the winning electoral coalition] over the Macrismo candidates changed the mood of the Argentine people.

From then until October it seemed like there was a long road ahead, but the people were aware that the victory they had won was not going to be marred by the narrow rightists and their puppet masters in Washington.

Of course, as many people in struggle proposed, the ideal outcome would have been to corner Macrismo in the streets under the slogan “Fight and they will leave.” That’s what is happening today with Sebastián Piñera [Chile] and Iván Duque [Colombia], but we [in Argentina] already experienced a 2001 in which it seemed that the revolt was going to end in revolution — yet this was not possible.

That is why this time the effort was made to reaffirm the feelings of the masses, and what seemed impossible a year earlier (for fear of fraud and Macri’s alliances with the U.S. empire) became a reality.

[The presidential/vice presidential ticket of] Alberto Fernández/Cristina Fernández won, without leaving any doubt, and this past Dec. 10, within 24 hours, the joy and the celebration overcame all the accumulated sadness and pain when millions were cheering and celebrating their inauguration.

Gains at home within weeks

Now that a new stage of the struggle has begun, we know that it will be difficult and in some ways uncertain because of the threats of a local and international right wing who refuse to concede and who, in the first hours of the new government, has already shown its teeth.

But we already have much: a needed economic emergency law; wage increases for private and state workers, including special bonuses for retirees; a national plan against hunger; increased taxation of sectors of the agricultural-livestock oligarchy; intervention in the intelligence services; radical changes in the leadership of the security forces; and an end to the criminalization of abortion, which had been demanded unsuccessfully for decades.

And there’s also a turnaround in foreign policy: by showing support and refuge to President Evo Morales, overthrown by a coup d’état; receiving with all state honors Cuban President Miguel Díaz Canel and Bolivarian Communication Minister Jorge Rodríguez; and a long list of advances, projects and concrete accomplishments that Alberto Fernández’s government has put in place in only two weeks.

Of course, this is no panacea, and there is still a long way to go, but it is clear that these are measures that the people have longed for and will resolutely support. It is even more clear since we know that the right wing has not stopped conspiring and that those the Macrista policy favored ad nauseam are already paralyzing the country and threatening more forceful measures.

Moreover, the International Monetary Fund and Donald Trump will try to collect a debt that the people did not contract for; and if they do not succeed in collecting it as they wish, they will generate further waves of destabilization.

In the face of this probable future, we must remember that this is once again the hour of the people, and every step taken to oppose capitalism’s insane strategy will only be won if the people struggle and put their bodies on the line in the streets. As did the 30,000 disappeared people in their time and more recently the feminists and sexual minorities.

No one concedes anything without being pushed, and that is the great lesson we must learn from the recent past. It is not with flirtation or misplaced moderation that an enemy who cares only about accumulating profits is neutralized — but only with resistance, struggle and unity, to defend what gains might be made and to make sure that politics is no longer deformed by the lovers of bourgeois democracy.