“Get sick, go broke!  Our health care is a joke.” That call-and-response was chanted loudly and clearly on Nov. 26 by hundreds of airport catering workers and supporters outside Philadelphia Airport’s American Airlines Terminal B. 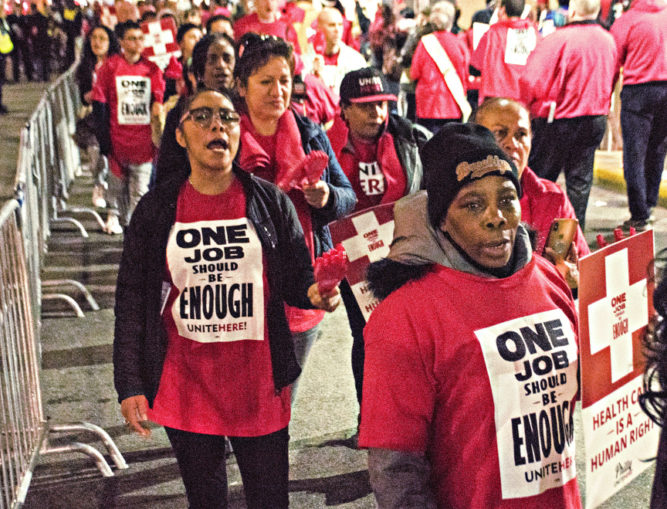 Before the demonstration came to an end, police had arrested 39 workers and supporters for “failure to disperse,” or blocking the airport’s busy terminal road. Similar protests organized by UNITE HERE took place at 17 other airports across the U.S. on the same day.

Here in Philadelphia, about 400 workers who prepare and provide food and beverages served aboard American Airlines flights are demanding better wages and health care benefits. Most of the workers are from West Africa. UNITE HERE represents them against the airline, which subcontracts LSG Sky Chefs for food catering. Since the airline holds the ultimate power, workers are hoping pressure at the terminal will force Sky Chefs to give in to their demands.

While American Airlines has made $12 billion in profits since 2015, subcontracted catering workers who service the company’s flights struggle with a health care plan that is too expensive for most of them. At the cost of $28 a week for an individual and $123 a week for the family plan, only 28 percent of the low-paid workers get single coverage and only 5 percent choose family coverage. The rest of the workers and their families can’t afford the high cost of health insurance and are uninsured.

Many workers refuse to apply for Medicaid, even though they may qualify for it, because of fear the Trump administration might count those public benefits against anyone applying for citizenship.

The workers have been in negotiations since May with Sky Chefs and have authorized a strike. However, federal law mandates workers cannot hit the bricks until released from mediation by the National Mediation Board, which handles labor-management disputes in rail and airline industries.

—  Report and photo by Joe Piette