Local Cleveland celebrities were serving meals to 8,000 homeless and low-income residents on Nov. 26 at an annual event, “Feed the Need.” Among them was Cleveland Browns defensive end Myles Garrett, whose indefinite suspension from playing had been upheld by National Football League Commissioner Roger Goodell five days earlier. Garrett displayed the characteristic warm and giving demeanor which has endeared him to Cleveland fans since his arrival in 2017. 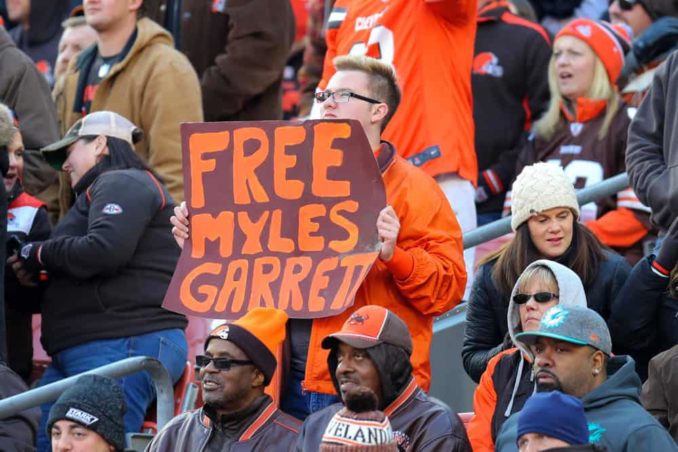 Garrett’s suspension came after a physical fight between him and Pittsburgh Steelers quarterback Mason Rudolph toward the end of a game in Cleveland on Nov. 14. Garrett tackled Rudolph, who then pulled on Garrett’s helmet and went for his groin. Garrett pulled off Rudolph’s helmet. Rudolph charged Garrett, who hit him on the head with his own helmet.

Garrett is Black. Rudolph is white. Garrett and two other Black players involved in the confrontation were ejected from the game and later suspended — Browns defensive tackle Larry Ogunjobi for one game and Steelers center Maurkice Pouncey for three games, later reduced to two.

Rudolph, the instigator, was not suspended. Rudolph’s subsequent fine was only for “unsportsmanlike conduct.”

Garrett’s union, the NFL Players Association, defended him before NFL Appeals Officer James Thrash on Nov. 20. There, in proceedings not expected to be made public, Garrett stated that Rudolph had uttered a racist slur. This accusation was disregarded by the NFL bosses, who said there was no proof the comment was made — based on the dubious assertion that no audio was available.

The union also argued that there was no precedent for indefinite suspension in comparable situations and that their collective bargaining agreement with the NFL prohibits indefinite suspensions for on-field conduct. Nevertheless Goodell upheld Garrett’s suspension, meaning he cannot play for the rest of the season or the postseason and must convince the NFL Commission to let him play again next year.

In upholding the suspension and leaking comments made in a private union-management grievance hearing, Goodell displayed the typical boss mindset of “the hell with the contract; we can do what we want.” This is the same Roger Goodell who attempted to sabotage Colin Kaepernick’s Nov. 19 workout. For this abuse of players of color, Goodell receives a salary of over $31 million a year — more than most players.

Since Garrett’s accusation against Rudolph made the news, Garrett’s teammates have attested to his character and credibility. So have Browns Coach Freddie Kitchens, former quarterback and sportscaster Bernie Kosar, and friend and Ultimate Fighting Championship’s current Heavyweight Champion Stipe Miocic. They are convinced that Garrett would not make up a false accusation.

Rudolph, through his agent, has called Garrett a liar. Rudolph is saying, in so many words, “I’m not a racist.” But from his social media “likes,” it appears Rudolph supports President Trump and the NFL’s stance against Kaepernick. That’s racism!

Cleveland fans of all nationalities have rallied behind Garrett in massive numbers. Over 85,000 signed a petition asking Goodell to overturn the indefinite suspension. Hats and jerseys bearing Garrett’s name and number 95 can be seen all over town, along with T-shirts reading “Pittsburgh started it.”

Signs at the Nov. 24 Cleveland game against the Miami Dolphins bore the hashtag “#Free Myles Garrett.” That Twitter feed has drawn over 200 comments supporting Garrett and protesting the suspension. The tweets are primarily expressing fan love. But a number of fans are stating explicitly they believe Rudolph made a racist remark.

Even if not consciously anti-racist, the mass outpouring of support for Myles Garrett is objectively a blow to the racist bosses of the sports industry — which is an integral part of the capitalist profit system.