Picture the Homeless celebrated the 20th anniversary of its founding by sponsoring a fundraising program on Nov. 25 in Harlem, N.Y.

PTH has been in the forefront of advocating — through direct action, marches, rallies, research and legislation — for the right of the homeless to decent housing, as opposed to relying on shelters as an alternative.  PTH was founded on Nov. 16, 1999, by two homeless men, Anthony Williams and Lewis Haggins, who were living in Bellevue Men’s Shelter. 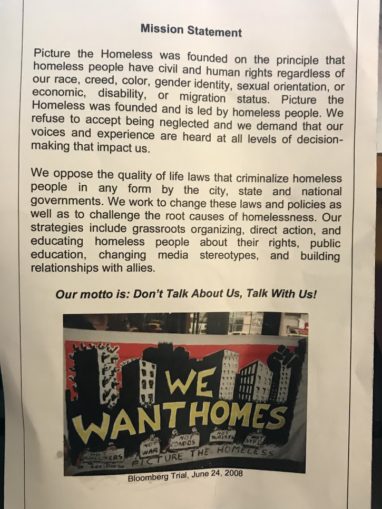 Williams received the Founder’s Award and gave a heartfelt thanks during the ceremony. The inscription on the award reads: “For your Vision, Courage & Belief Those Human Beings without Housing Can Organize & Speak for Themselves.”

Other awards were given to longtime PTH organizers Jean Rice, recipient of a lifetime award, as well as Nikita Price, DeBoRah Dickinson, William Burnett, Rachel Brumfeld and Sam J. Miller.  Before each organizer received their award, their recorded oral testimony on how PTH changed their life was played.

Part of the program description of PTH states: “PTH has forever changed how homeless people are pictured by our fellow New Yorkers.  As a result, Picture the Homeless has organized to win public policies in the areas of policing, housing, land use and the shelter system.  Don’t Talk About Us: Talk with Us!”

For more information, go to picturethehomeless.org.