Fred Hampton, the official chairman of the Illinois chapter of the Black Panther Party and deputy chairman of the national BPP, was only 21 years old on Dec. 4, 1969, when he was brutally assassinated while sleeping in his bed. He suffered multiple gunshot wounds in a raid by white, local Chicago police and other repressive state agencies after he had been drugged. 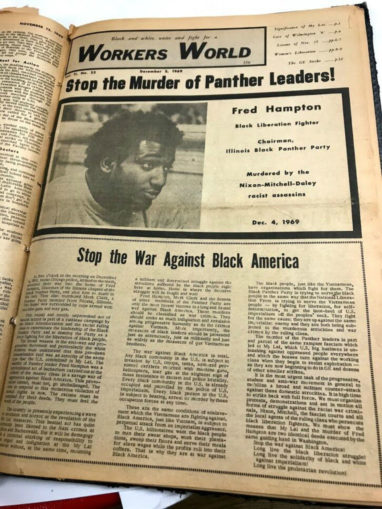 His partner, Akua Njeri, aka Deborah Johnson, was eight months pregnant with their son, Fred Hampton, Jr., at the time of the raid. She survived, but BPP member Mark Clark was also killed.

When Hampton died exactly 50 years ago, spontaneous demonstrations sprang up all over the country with the rallying cry, “Avenge Fred Hampton.”

Hampton was a victim of the U.S. government’s Cointelpro (Counter Intelligence Program), founded by FBI Director J. Edgar Hoover during the early 1950s to target for imprisonment and assassination individual leaders or movements fighting for national liberation and social justice.  Some of the most well-known targets, besides Hampton, for Cointelpro’s 24-hour surveillance, especially in the 1960s and 1970s, were Malcolm X, the Rev. Dr. Martin Luther King Jr., the Young Lords, political prisoners Leonard Peltier and Mumia Abu-Jamal, and the Black Panthers.

Hampton was in the midst of helping to build a multinational united front of smaller revolutionary formations with varying ideologies in order to organize against U.S. imperialism at home and abroad. This strategy suffered a devastating setback with his assassination.

Hampton had gained national prominence due to the dynamic way he spoke revolutionary truth to power, which resonated among the super-oppressed Black people.  His growing popularity among the masses and the movement no doubt made him a primary target of the racist, repressive state.

Sitting next to the blood-soaked bed where Hampton was killed was a book written by Vladimir Lenin, the leader of the 1917 Russian Revolution.

Fifty years after Hampton’s death, the following quotes heard from him in the 1971 documentary, “The Murder of Fred Hampton,” continue to inspire prior and new generations of activists who hate capitalism: