A series of events in the Bay Area and around the U.S. have put the spotlight on U.S.-funded repression and killings in the Philippines that target progressive political organizations and unionists.

The attacks began to escalate on Oct. 31 when police and military raided the offices of Gabriela, a women’s organization; the National Federation of Sugar Workers; and the anti-imperialist Bayan Muna, belonging to the leftist political party Makabayan, based in the Philippines. More than 57 activists, unionists and human rights defenders were arrested. 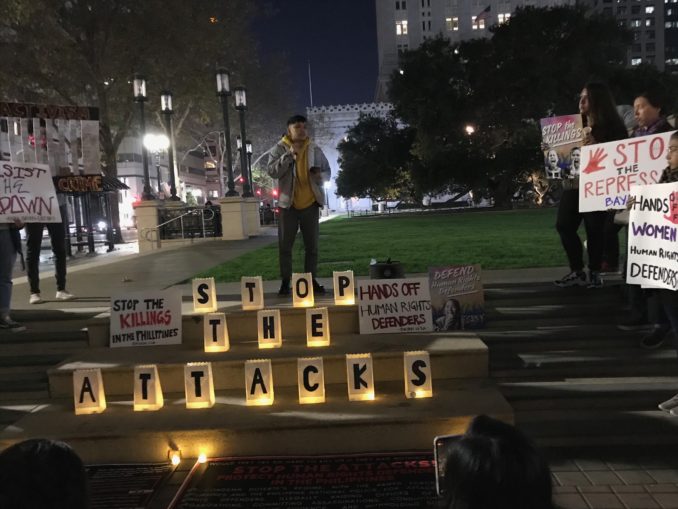 Then on Nov. 4, Rey Malaborbor, a former political prisoner, was murdered, and another activist, Honey Mae Suazo, disappeared. On Nov. 5, the offices of Bayan were raided in Manila, and leaders of Bayan, Manila Workers Unity and Kadamay, an organization of urban poor people, were arrested.

In the U.S., a candlelight vigil of protest was held at Oscar Grant Plaza in Oakland on Nov. 8, led by PUSO (Philippines-US Solidarity Organization), BAYAN USA-Northern California, GABRIELA-Oakland and Anakbayan-East Bay. They rallied under the call, “Stand with the Human Rights Defenders of the Philippines.”

Rhonda Ramiro of BAYAN stated: “The list of the atrocities runs really long. We are talking about air strikes and raids, arrests of union members, women’s organizers, human rights defenders, killings of  judges and journalists, and the disappearances of farmworkers.”

Ramiro spoke in depth about the attacks on the many union, peasant and people’s movements in her country: “We are outraged by these attacks because they are a part of the Trump-backed Duterte regimes’s concerted campaign to end the successful organizing of workers, many of whom are, like us, struggling for a livable wage. The government is trying to repress Indigenous people who are just protecting their land that is being stolen by multinational corporate interests. Some of these corporations are right here, like Chevron, in our backyard [in the U.S.].”

Ramiro and others at the rally linked the repressive attacks in the Philippines with the struggles in the Black and Brown communities of Oakland against police violence, for education and for housing. Other speakers called for “international solidarity” against the U.S.-funded Duterte regime.

An international day to support Filipino unions, with demands to “stop trade union repression, unionizing is a right, free our unionists” was organized on Nov. 16. The Kilusang Mayo Uno (May First Labor Movement) of independent labor centers asked for union supporters around the world to use social media to send solidarity messages. The International Action Center and the International Workers’ Solidarity Network immediately responded to mobilize their social media networks. Demonstrations were held in Washington, D.C., and other parts of the country to demand that Filipino union members be released immediately. (iacenter.org)

On IAC- and IWSN-related websites, workers were urged to “struggle against the repressive measures of governments and big and local corporations. Neoliberal policies that serve big corporations attack workers by pressing down wages and by depriving them of basic rights including the right to unionize. #StopWorkersRepression.”