This article is based on lightly edited excerpts from a talk given at the Nov. 2 Workers World Party meeting in New York City.

We meet on stolen Lenni-Lenape homelands — the Lenapehoking. Workers World Party looks forward to the day when all Indigenous nations’ land claims are paid in full — from the Wampanoag lands on the Cape to the Ohlone lands in the San Francisco Bay Area and from the Appalachians to the Rockies.

November is National Native Heritage Month, and this November will mark the 50th National Day of Mourning. In 1970, an Aquinnah Wampanoag man, Wamsutta Frank James, who had been asked to speak at a fancy Commonwealth of Massachusetts banquet celebrating the 350th anniversary of the landing of the Pilgrims, was told by a representative of the Massachusetts Department of Commerce and Development that he wouldn’t be allowed to give his speech. 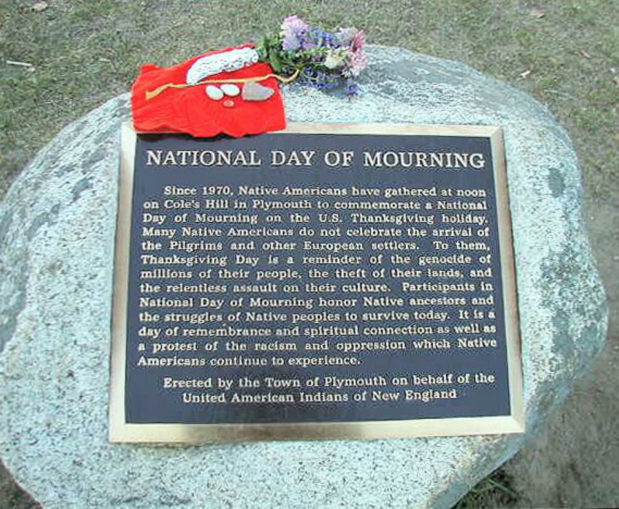 UAINE sued the city of Plymouth over the 1997 arrests. Part of the settlement was the installing of this plaque.

Wamsutta used one of the Pilgrims’ own history books as a basis for his talk — an account of their first year on Turtle Island. The book told of their opening his ancestors’ graves, stealing the Wampanoag villagers’ food supplies and selling his ancestors as slaves for 220 shillings each. What? The descendants of the Pilgrims didn’t want the truth?

There is a reason the U.S. has a national holiday for Plymouth and not for Jamestown colony. Jamestown’s settler history is far too ugly and well-known. The ruling class cannot make the slave block something for school children to celebrate. And those first white settlers in Jamestown actually turned to cannibalism to survive.

Myths about the Pilgrims exposed

Let’s go over the general myths: The Pilgrims did not find empty lands here. Every square inch of this land is Indigenous. The Puritans did not come here seeking religious freedom. They had that in Holland. No, they came in a commercial venture to make themselves rich.

One of the very first things the Pilgrims did when they arrived on Cape Cod was to rob Wampanoag graves at Corn Hill and steal as much of the Native villagers’ winter provisions of corn and beans as they were able to carry. And what did the Pilgrims bring to these shores with them? Pilgrim settlers introduced racism, jails, class society, capitalism, patriarchy, anti-lesbian and gay bigotry, and repression of two-spirits to this continent. They carried out deforestation and over-hunted the wildlife here, not for food, but for profits — beginning capitalism’s devastation of the environment and biosphere.

And they did not even land at Plymouth Rock! That little rock was cleared from the land for farming and made into a monument to racism and oppression. National Day of Mourning demonstrators have buried it twice.

The Mayflower ship was boarded in past demonstrations. One year protesters tore the Union Jack from its mast and replaced it with a flag that was flown over liberated Alcatraz Island [in San Francisco Bay, held by Indigenous people for 19 months from 1969 to 71]. The roots of Day of Mourning have always been firmly embedded in the soil of militant protest.

About the only truth in the whole mythology is that the pitiful, filthy unbathed, grabbing Pilgrim thieves would not have survived their first several years on land which they arrogantly named “New England” without the aid of Wampanoag people. What the Wampanoags got in return for this help was genocide, theft of their lands and never-ending repression.

Back in 1970, the organizers of the fancy state banquet told Wamsutta they would only let him speak if he agreed to deliver a speech that they would write. Instead, Wamsutta and hundreds of Indigenous people and their supporters gathered in Plymouth and observed the first National Day of Mourning. Only Indigenous people spoke at the Day of Mourning observance, and that is true to this day.

Wamsutta and the United American Indians of New England continued this work of telling the truth about the Puritans. UAINE has returned to Plymouth every year since 1970 to demonstrate against the Pilgrim mythology, which is still taught in schools. It is even on the goddamn citizenship test.

But the first actual “Thanksgiving” dinner was proclaimed in 1637 by Gov. John Winthrop to celebrate the safe return of men from Massachusetts colony who had gone to Mystic, [Conn.], to massacre over 700 Pequot women, children and men. They celebrated with the foods that Indigenous peoples grew and ate for thousands of years, foods familiar to you today as the traditional Native harvest feast dishes that they commodified for profits. The thieves never stopped taking.

In the struggle in Plymouth in 1997, cops assaulted the Day of Mourning marchers when the march crossed the path of the annual Pilgrims’ procession. By the way, when the Pilgrim descendants recreate their landing, the rich men walk first, followed by their wives, then the servants come last carrying the bags.

In 1997, police attacked the Native marchers, maced grandmothers and children, and arrested 25 people.  Court dates were split up to make it hard for supporters to travel repeatedly from Boston to Plymouth to testify as witnesses or to pack the courtrooms.

Workers World Party responded to UAINE’s call to gear up for increased repression at the march in 1998. During that struggle, there was a surprising response from European tourists who threatened to boycott. The town of Plymouth then dropped all charges against those arrested, conceded that UAINE has the right to march every Day of Mourning without a permit and paid some small reparations.

You all saw the attacks at Standing Rock. Attacks on Native peoples always turn deadly. This administration is attacking the Indian Child Welfare Act, an important law meant to keep Native children with their families and their Native nations, as many are removed from their Native families and adopted out through far-right, white Christian adoption networks.

Stealing children has a long history in this country. During the slave trade, children were torn from their mothers’ arms at auctions. Plymouth sold Native women and children into slavery. Since the end of the Indian Wars — those wars across the Great Plains to the Rockies to steal the vastness of the continent, leaving the survivors on reservations, some far from their homes — thousands of Native children have been stolen from the Lakota and Dakota Nations alone. This is an incredibly important struggle throughout Native nations and communities. It’s an open wound.

Most of you remember that one of Trump’s first acts was to come down hard on the Standing Rock water protectors and go all-out in support of all fossil fuel extraction — damn the consequences to clean water and air and the lands! The Indian Wars have never ended; “manifest destiny” is the imperialists’ mantra to take over our Mother Earth.

Then, to continue their assault on the lands, Trump’s Department of Interior head [Ryan] Zinke led the attack on Bears Ears, which are sacred ancestral lands to Navajo, Hopi, Zuni, Ute Mountain Ute, and Uintah and Ouray Ute Nations. These five nations united and won monument status for 1.3 million acres in Utah with unprecedented Indigenous oversight. Trump stripped control from these Native nations over uranium, oil and gas deposits and their own cultural heritage on their ancient ruins. Puebloan ancestral ruins in that area are thousands of years old. There are also ancient and unique dinosaur remains of scientific interest. This fight is not over yet!

Zinke and the right-wing descendants of settlers in Utah rode [all-terrain vehicles] roughshod through those fragile environments during a political rally to demonstrate their disregard for the lands and waters, the people and the fragile life in the environment. They want uranium mining to start up again. When you mine uranium, you have in effect declared those lands a sacrifice zone. This is not about energy; they want to make more nuclear bombs.

After the U.S. military bombed Japan, U.S. companies mined 30 million tons of uranium on the Navajo reservation in the Four Corners area of the Southwest. The Diné Nation still bears the brunt of the mining of radioactive uranium ore. There have long been clusters of birth defects and stillbirths in Diné children in the Shiprock, N.M., mining area.

The National Institutes of Health reported in 1992 that over 320 types of congenital conditions had been detected in Indian Health Service hospital records from Shiprock. University of New Mexico researchers even found uranium in the blood of Diné infants. Some 85 percent of Diné households are affected.

The imperialists wanted to ditch the nuclear treaties (more treaties to break, by the way), and they support Trump on this. The nuclear arms race began with Washington’s intention to conduct a first-strike attack against the USSR. The U.S. has more nuclear weapons than all other countries combined and surrounds the Korean peninsula with nuclear bombs. Trump has said he wanted to use them.

The U.S. military even uses left-over depleted uranium. The U.S. military left parts of Iraq poisoned with DU to the extent that Iraqi women in Fallujah have been warned not to get pregnant because their babies are born without limbs. That war crime was uncovered and publicized in the Iraq War Crimes Tribunal in the 1990s organized by the International Action Center and our WWP comrades.

As a consequence of the mighty struggles at Standing Rock against the Dakota Access Pipeline, which is now carrying oil — threatening spills into the nation’s largest supply of clean water — and the on-again struggle against the Keystone XL Pipeline, states have passed legislation criminalizing First Amendment rights to protest fossil fuel infrastructure.

Also, North Dakota passed legislation to prevent Native people at Standing Rock, Fort Berthold, Spirit Lake, Turtle Mountain and Lake Traverse reservations from voting by requiring IDs with a street address. Most members of these Native nations have post office box addresses, which is not uncommon in many rural areas which lack residential postal delivery.

Fighting ruling-class lies means raising awareness that Indigenous peoples are not dead and gone. We live among you, despite smallpox, genocide and constant warfare from coast to coast. Indigenous peoples have a vast heritage — even if you consider only Native-originated foodstuffs: Over half of the world’s foods by species and tonnage are native to this hemisphere and were created and grown for thousands of years before we were invaded.

Native peoples are referred to when there is a hot struggle like Standing Rock, and even then it’s a hard fight to get media coverage. But we are forgotten in much of the progressive movement the rest of the time. The struggles to protect Mauna Kea in Hawai’i and to stop the Keystone XL pipeline are ongoing. Every single struggle in this country connects back to the genocide of Native nations.

There are two long-running annual Indigenous events against the November holiday: the 50th National Day of Mourning at Plymouth and this year marks the 50th Unthanksgiving Indigenous Peoples’ Sunrise Ceremony at Alcatraz Island.

U.S. history is full of lies meant to erase the Indigenous nations and millions of people who lived here for untold millennia before the European invasion. That’s why Workers World Party joins UAINE every year for National Day of Mourning at Plymouth.

In solidarity with the Wampanoags, Narragansett, Massachusett and other colonized Indigenous Nations of the Cape region, we remember the words of Wamsutta: “We are not vanishing. We are not conquered. We are as strong as ever.”

Tromblay is Huron nonstatus and of mixed Southeast Indigenous heritage.