These criminal acts have been directed at the large Indigenous population that supports the Morales government. State forces backing the coup fired on marches, mainly in the cities of Cochabamba and La Paz and on Nov. 19 by helicopter gunfire in El Alto. 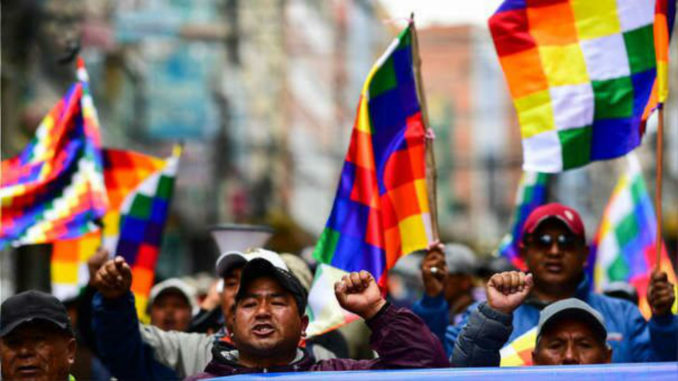 People march with the Wiphala, the Indigenous flag, in Cochabamba, Bolivia.

Some deaths may be unreported as the coup regime has censored news, expelling foreign journalists and threatening to kill Bolivian journalists if they report the truth. On Nov. 21, the coup regime closed down the TeleSUR network’s news coverage in Bolivia, one of the few media that would give fair coverage to Morales supporters.

To guarantee that the military commanders would fire on Indigenous demonstrators, the coup regime transferred $4.8 billion to the armed forces and issued a decree on Nov. 15 that the armed forces and police personnel have impunity. This means they cannot be prosecuted for crimes against humanity for firing on unarmed people.

Despite the risks, many of Bolivia’s 11.6 million mostly Indigenous people have continued to mobilize across this country, which is larger than Texas and New Mexico combined. They have blocked the streets of the capital, La Paz, and prevented deliveries of gasoline and food.

Other prominent enemies of the people include the Armed Forces generals who were trained at the U.S.-run School of the Americas in Georgia and have led the military’s actions during the coup. (greyzone.com, Nov. 13)

Both Washington and its puppet group for colonial action in Latin America — the Organization of American States — have to figure out how to back up their false claim that the new regime is democratic or admit that they are aiding a coup.

The coup leaders have a problem because two-thirds of the parliament were elected from the Movement Toward Socialism (MAS) party, and MAS has refused to recognize Áñez. To eliminate MAS electoral leaders, Murillo talks of “hunting” the leaders and has accused MAS’s leading members of parliament of “sedition” and “subversion.”

The coup regime continues to bring military and police pressure against the remaining MAS leaders. Without the agreement of the MAS legislative majority, constitutional elections with a new Supreme Electoral Tribunal cannot be held.  Donald Trump, OAS head Luis Almagro and the European Union have said they back the new regime “because it is democratic.”

Elections during state of siege

Though it might seem ridiculous to promise to hold “free and democratic” elections when the entire country is in a virtual state of siege, that’s the coup leaders’ scenario. And they plan to do this without allowing Evo Morales or his vice president to reenter the country, let alone participate in the election. Morales and Vice President Álvaro García Linera are currently in Mexico, where they have been granted asylum. Morales has said that the coup leaders have tried to kill him.

According to Marco Teruggi’s Nov. 23 article in pagina12.org.ar, while “the persecution is deepening, [and] police and military repression has killed more than 30 people, the pain and anger is growing. Faced with this repression, the people remain in the streets advancing together with those in the legislature, although not necessarily in a coordinated manner. MAS has already announced that it is working to achieve an electoral way forward under the least unfavorable conditions possible. But can it?”

Even as they fight it out in the impeachment hearings, the Trump administration and the leading Democrats are giving bipartisan backing to the coup-makers and vilifying and slandering the Morales government. The same is true for the corporate media: Both pro- and anti-Trump media attack Morales and refuse to call the coup a coup.

Only a few Democratic Party politicians — Congresswomen Alexandra Ocasio-Cortez and Ilhan Omar and Senator Bernie Sanders, for example − have criticized the coup and called it a coup.

Anti-imperialist forces in the U.S. can expose the lies of the imperialists and their media, defend Bolivia’s democratically elected MAS government, and continue to call a coup a coup. That is a minimum. To the extent possible, they can also support and encourage the continued growth of the resistance in Bolivia, whatever form it takes, in the face of criminal repression by imperialism and its local lackeys.