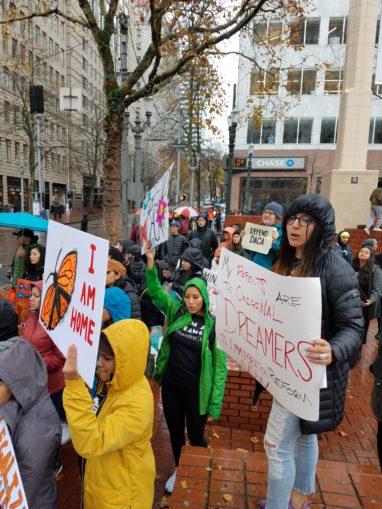 Members of the Oregon DACA (Deferred Action for Childhood Arrivals) Coalition shared their stories during the “Defend DACA, Home Is Here” rally on Nov. 12. An estimated 250 people gathered to call on the Supreme Court to reject Trump’s attempts to terminate the DACA program. Organizers said, “We are Oregonians and we want to shift the narrative of what undocumented experience is.”

In Washington, D.C., several thousand DACA supporters demonstrated chanting, “Sí, se puede.” Rallies also took place in other cities, such as New York and locations in California. Protesters included DACA recipients, their supporters and teenage immigrants who were too young to qualify for DACA when it was first established in June 2012 by President Barack Obama.

Trump appealed to the U.S. Court of Appeals to terminate DACA in 2017. The program allowed 800,000 young people brought to the U.S. when they were children to work and study without fear of deportation.

Instead of waiting for a decision from the Court of Appeals on DACA, Trump requested a review by the U.S. Supreme Court, a process normally reserved for unique circumstances.

Last June, 660,880 DACA recipients and their advocates filed lawsuits against ending DACA. Some of these lawsuits include NAACP v. Trump; Regents of the University of California, et al. v. Dept. of Homeland Security; and Batalla Vidal v. Nielsen. These lawsuits resulted in injunctions that temporarily stopped DACA from ending.

On the day of the Nov. 12 rally, the U.S. Supreme Court began reviewing the lawsuits regarding the “legality” of ending DACA. Their decision is due next spring. Before the hearing, Trump tweeted, “Many of the people in DACA, no longer very young, are far from ‘angels.’ Some are very tough, hardened criminals.” He continued, “If Supreme Court remedies with overturn, a deal will be made with Dems for them to stay!”

A recent Harvard study, “The Long-Term Impact of DACA: Forging Futures Despite DACA’s Uncertainty,” found that 76 percent of DACA recipients had doubled their yearly salaries, due to completion of job training, licensing and certificate programs. (tinyurl.com/v3l4uzb/)

The Oregon DACA Coalition is fighting to protect DACA recipients, their families and all immigrant communities on a national scale. They are calling on the U.S. Supreme Court to uphold the highly successful DACA program and not put immigrant youth at risk of deportation, which endangers the future of hundreds of thousands of members of communities all across the U.S.

Thousands of DACA recipients must submit paperwork costing $1,000 to remain in their own homes. Without protection, they could lose their jobs, homes, families, along with general safety from being deported. One organizer said, “No one who was raised in Oregon should be forced to pay and prove to the government that they deserve to stay in their home.”

For more information, go to oregondacacoalition.org.