Nov. 15 — Harvard College Act on a Dream (AOD) launched the #CrimsonListen campaign today with a petition, boycott, teach-in and surprise action at a ceremony intended to welcome new leadership at the Harvard Crimson, Harvard’s student newspaper. 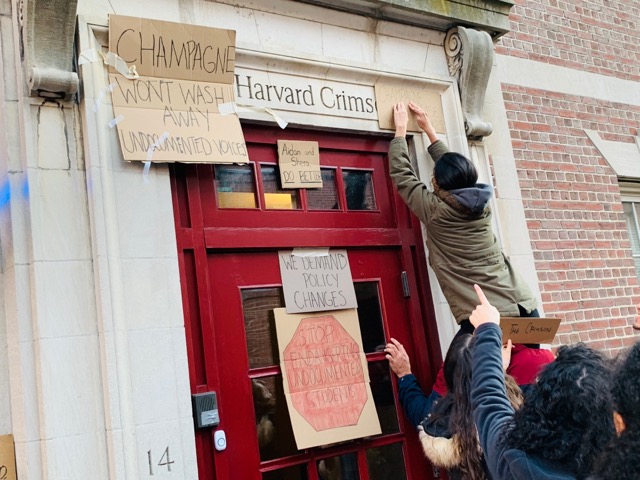 Undocumented and at-risk im/migrant students and workers had endured a disturbing September incident where the Crimson actually called Immigration and Customs Enforcement to solicit its comment following a militant “Abolish ICE” rally organized by AOD.

AOD is fighting for DACA recipients to be granted permanent citizenship.  AOD considered the invited “comment” as collaboration with ICE, in that those who speak out despite their status could be targeted. Student reporters broke protocol by not disclosing their intention to contact ICE when they interviewed AOD rally participants. Crimson leadership doubled down when criticized for this disclosure lapse, pointing to “journalistic standards.”

In the wake of this incident, many have pointed out that the Crimson’s record for seeking comment from agencies protested on campus has been totally inconsistent.

The launch of #CrimsonListen today starkly highlighted the wilfully ignorant position of the storied student newspaper leadership amidst the attacks on im/migrants in the U.S. As Black and Brown student editors walked out and joined groups of protesters stationed at each entrance leading to the planned ceremony, a smaller group locked themselves in to engage in champagne horseplay, spraying and sipping at the repurposed “celebration,” while the crowd chanted and affixed placards to the doors.

Four workers representing the Harvard TPS Coalition joined the action. This group is connected to the university’s dining hall workers, who are represented by UNITE HERE Local 26. The dining hall workers have mounted militant struggles for justice for workers with Temporary Protected Status; they are also in solidarity with immigrant and undocumented students and oppose any collaboration with ICE.

A sign of the boycott’s success is that students say many stories have been scrapped or published without typical sourcing. The Crimson has also been expressing more than usual interest in campus workers’ issues and calling union stewards from Local 26. But union stewards have been refusing these “opportunities” because they will not be scabs for the Crimson to use against their comrades in Act On a Dream.