No to charters, resegregated schools in Little Rock, Ark.

Teachers in the Little Rock School District went on strike Nov. 14 to protest the Arkansas Board of Education’s vote in October to no longer recognize their union, the Little Rock Education Association, when the contract expired Oct. 31. Educators warn that the white-dominated state legislature, which took control of the largely African-American 23,000-student district in 2015 after there were low test scores in several schools, is once again pushing a plan to privatize education [code for charter schools] and resegregate the school system.

“We have no other option at this point,” LiREA President Teresa Knapp Gordon told the Nov. 15 Payday Report: “They use our children as pawns in their privatization scheme, and we, as educators, feel we have a moral obligation to stand up for our students and protect them.”

In addition to demanding restoration of their bargaining rights, the LREA wants to see full local control of the district restored after five years as originally stipulated. However, the state wants to extend that to schools with D and F ratings. But, says social studies teacher Megan Perctyman, “Schools that are rated D or F all have minority populations and are located in communities that are high minority and high poverty. By dividing schools up based on these ratings, it’s creating de-facto segregation in Little Rock.” 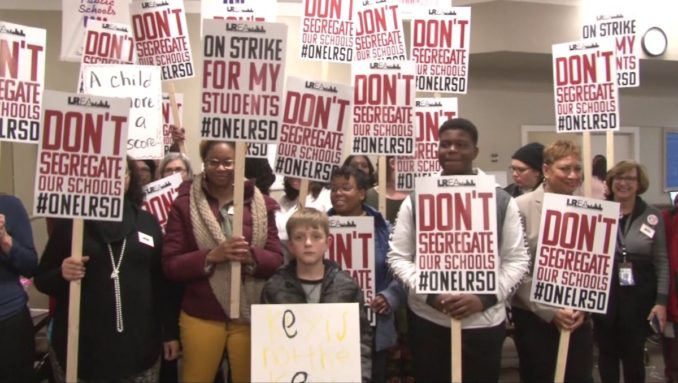 On Oct. 17 nurses at SSM Health St. Louis University Hospital not only defeated management’s decertification vote, but the next day they took their struggle to SSM-SLU’s posh corporate gala! Inside the Four Seasons Hotel in downtown St. Louis, SSM-SLU’s corporate leaders, donors and philanthropists gathered to enjoy a lavish dinner. Outside, SSM-SLU nurses, represented by National Nurses Organizing Committee/National Nurses United, stood in the rain passing out flyers explaining SSM-SLU’s poor treatment of the workers and the bosses’ greedy tactics. Four incognito protesters snuck in and placed fliers on dining tables explaining the nurses’ situation. The disruption was a success, with labor-friendly politicians, United Auto Workers members and other allies joining the rank-and-file fight that night.

The Trump-dominated National Labor Relations Board proposed a rule Sept. 30 that would reverse the 2016 decision that graduate student workers at private colleges and universities are employees who have the right to vote for collective bargaining. The American Federation of Teachers responded by setting up AFT Academics, which held demonstrations in Boston, Chicago and Washington, D.C., on Nov. 14 to protest the anti-union ruling.

A statement on aft.org noted that graduate workers “teach university level courses, publish work, and do research that brings our institutions prestige, grant money, and lucrative patents — yet we have no real power over the decisions that impact our work and lives.”

To support labor rights of grad student workers, sign the petition on aftacademics.org during the public comment period ending Dec. 16.

Union victory for U of New Mexico faculty

Full-time faculty voted 500-305 to unionize, while part-timers and adjuncts gave the AFT and AAUP a 256-26 landslide. The faculty’s organizing committee, United Academics of the University of New Mexico, will set up two bargaining units to start detailing their bargaining strategy. (aft.org, Oct. 19) Congratulations to UNM professors and teachers in their decisive move for workers’ democracy at work!