The workers at the General Mills plant here ratified their first union contract on Nov. 14, after a hard-fought battle with the company. Members of the Department Store Workers Union (RWDSU) Local 110, the General Mills workers have been seeking better pay, better treatment and job security.

On Oct. 31, during contract negotiations, General Mills offered the approximately 520 workers what they called their “last, best and final offer,” which did not secure any of the key provisions the workers were demanding. Instead, the workers were offered an “empty contract,” according to a Nov. 1. RWDSU press statement. 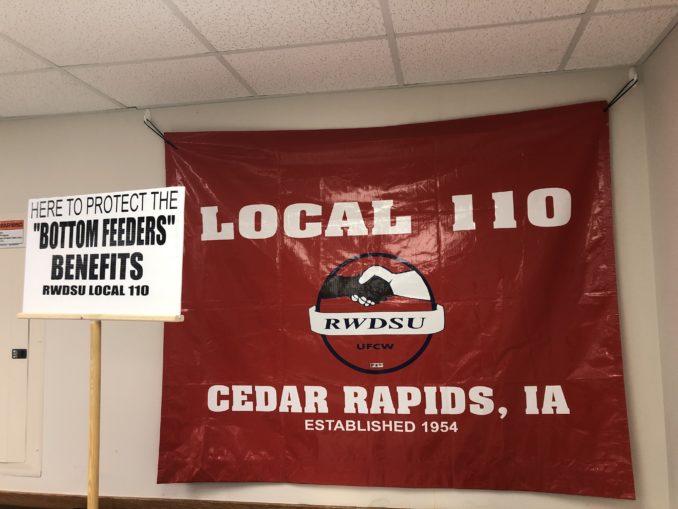 “The contract also seeks to install unfair scheduling practices and third-party subcontracting that could move jobs from Cedar Rapids to non-union facilities nearby or abroad,” the statement read.

When the vote took place at the Local 110 Union Hall on Nov. 6,  99 percent of the membership voted it down. After the results were announced, the union negotiating committee agreed to meet with representatives of the company the following morning.

General Mills worker Tim Sarver, who has been with the company for over 37 years, described what had been happening at the union hall during that week as “the true definition of solidarity. … Our members stand strong at General Mills. By standing together and showing the company the real impact this could have on our families, we have shown what having a union is all about. This contract has the potential to change the lives of so many in our community.”

In a RWDSU statement on Nov. 15, Vice President Roger Grobstich said they worked hard to avoid a strike. Since the company agreed to come back to the table the following day, it was an admission that “they know their workers are critical to their own success. Cedar Rapids, Iowa, was built on cereal, and General Mills cereal needs to ensure our city continues to thrive. This worker-led negotiations committee has shown our city what it means to stand up to corporate America tonight. They are doing so to protect their jobs, their families, and our local economy.”

If General Mills had refused to accept their core conditions, the workers would have walked out.

The possibility of a strike had been looming at the plant for quite some time, long before the Nov. 6 vote.

The company website talks about “putting people first” when it comes to careers at General Mills. Based on the actions of the company from years past, they have been putting their profits over workers and their families.

In the spring of 2018, 625 full-time positions were eliminated. The plant had been increasing its reliance on low-paid labor supplied by temporary agencies. This caused great concern to full-time employees who feared their jobs would be “undercut” or eliminated altogether. The company was “bleeding” employee benefits, and General Mills reduced workers’ allowed absences from five days to three.

The workers voted to join  RWDSU on Jan. 9. Affiliated with the Food and Commercial Workers (UFCW), which represents over 1.3 million workers in the U.S. and Canada, RWDSU also represents workers at the Quaker Oats plant in Cedar Rapids and Coles Quality Foods in North Liberty.

By standing in solidarity and rejecting General Mills’ final offer, the workers forced the company back to the bargaining table to avoid a strike.

A tentative contract agreement was reached Nov. 8. The worker-led negotiating committee “worked tirelessly to secure a strong contract that stops the bleed out of long-held needed benefits,” according to a RWDSU press statement, and recommended the workers vote in favor of it. The new three-year contract was ratified Nov. 14.

In addition to annual hourly wage increases and a ratification bonus, contract provisions include an additional six days paid time off each year, maintaining long-held benefits, scheduling that preserves the three-shift system, limiting the number of temporary employees, adding new full-time entry-level positions and grievance procedures with just-cause language for discipline. General Mills will also be required to “meet and confer” with the union prior to any subcontracting or in case of a projected plant closure.

After the contract was ratified, Sarver said, “I am thrilled to know we will all be going to work tomorrow with the peace of mind of a strong union contract. Over 500 families can sleep well tonight knowing their needed benefits are secure for the next three years. The strength of our union during these first contract negotiations was extraordinary. I am proud to say that a union contract is now part of every balanced breakfast that comes from our General Mills plant.”  (KWWL.com, Nov. 14)