Disabled and elderly paratransit riders in Seattle have won a victory over the corporate criminal, Veolia corporation, which for years has delivered negligent service to the disabled riding public. King County Metro Transit, which controls the Access Paratransit, just got rid of its contractor, Veolia, after years of public pressure and organizing. The Stop Veolia Seattle organization worked in solidarity with Access drivers and also had the support of the Boston School Bus Drivers union, United Steelworkers Local 8751. 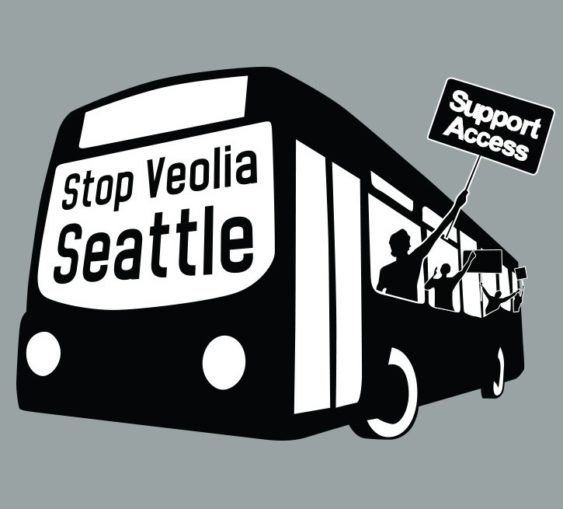 Access, with a large fleet of buses, has been controlled by transnational Veolia since 2008. The Veolia empire is rich and extremely well-connected within the capitalist system, in both public and private enterprises in 48 countries. They specialize in privatization of public services and assets. They have gobbled up government contracts in transportation, water privatization, sewage, trash or “environmental services” and “energy services.”

Veolia has a record of bribery, racist environmental destruction and attacks on unions. There is also a legacy of successful working-class organizing against Veolia’s destructive practices.

Stop Veolia Seattle has helped organize demonstrations of people with disabilities and the elderly at King County Council where they have spoken out about Veolia’s bad service. To get picked up, riders have had to wait long periods of time out in the rain and cold. At other times the bus will circle the city because of poor routing practices. The King County Auditor’s Office found that the county paid Veolia more the longer that a rider was on the bus; so long trips were incentives.

In 2008, when Veolia won the lion’s share of the Access contract, they broke the drivers union, Amalgamated Transit Union Local 587, and drivers were forced to take wage cuts. Veolia secured a contract with the county which Metro said would save the county $1 million. After three years, though, the county paid Veolia $7.7 million more than before — with less service.

A few years later the workers won back a union with Teamsters Local 117. This came right on the heels of the Boston School Bus Drivers’ victory over Veolia in the fall of 2016, a struggle which Stop Veolia Seattle had supported and publicized. Organizers in Seattle credit the Boston victory in forcing Veolia to allow the union back in Seattle. The Boston struggle beat off the entire political establishment there in league with Veolia, which was involved in a vain attempt to break the Boston School Bus Drivers union.

As the struggle went on groups such as the Transit Riders Union; ADAPT, a civil rights, direct-action organization for disabled people; and Disability Rights Washington joined the struggle and allied with Stop Veolia Seattle.

King County released a Request for Proposals for paratransit in 2017 that didn’t even comply with the Americans with Disabilities Act, and the coalition shut it down. The pressure from the alliance of organizations finally forced the county to dump Veolia this summer. Stop Veolia Seattle held a victory party with many disabled and elderly people. The new contractor for Access will be closely monitored. Veolia will no longer make profits from negligent service to the disabled in Seattle.

Veolia is also a target of the BDS (Boycott, Divestment and Sanctions) movement due to Veolia’s exploitative contracts with Israel in occupied Palestine. Veolia built a light-rail transit line from illegal Israeli settlements on the outskirts of Jerusalem into the central city, almost completely bypassing closed-in Palestinian neighborhoods.

But after many years of organizing and through groups like Stop Veolia Seattle allied with the BDS movement, and unions and communities around the world, Veolia’s “profits before people” policies have been pushed back.

In August 2015 Veolia announced it was selling all its enterprises in Palestine and Israel because the BDS movement cost it over $24 billion in lost contracts, marking a major victory for BDS and the struggle to free Palestine from racist, Zionist rule. Veolia has lost many contracts around the world, but will remain a threat “til every battle’s won!” (Lyrics from “Which side are you on?” by Florence Reece)