As news of the U.S.-backed coup d’état in Bolivia and the Nov. 10 forced resignation of President Evo Morales hit the airwaves and social media, activists around the globe took to the streets to demand Morales’ return to office.  Protests began on Nov. 11 in multiple cities in the U.S., home to many of the multinational corporations behind the coup. A second round of demonstrations was organized for Nov. 16 in support of the heroic resistance of the Bolivian people, especially Indigenous activists and workers, against the coup. 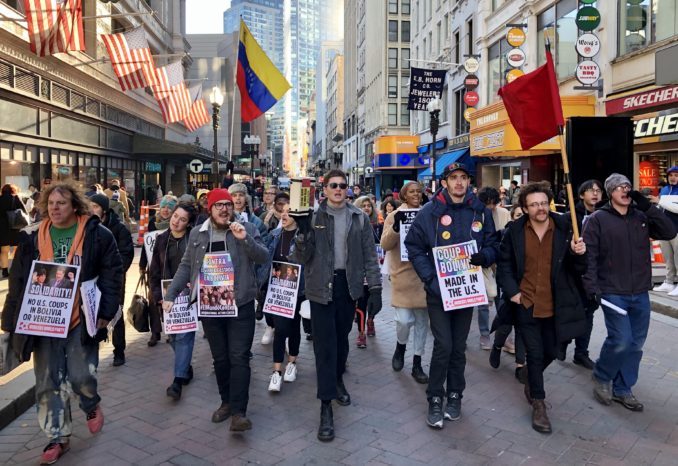 Chanting “Evo Morales, we’re with you! No to the U.S.-backed coup!” activists rallied at Park Street Station on the Boston Common on Nov. 16.  An emergency coalition of anti-imperialist, pro-socialist, peace and justice groups; students and youth climate activists; and trade unionists came together in staunch defense of President Evo Morales and the workers and Indigenous peoples of Bolivia.

The demonstration was cosponsored by the Committee for Peace and Human Rights, which has held weekly anti-war vigils in Boston since the first Gulf War in 1991, along with Workers World Party.

Sam Ordonez, of Fight for Im/migrants Everywhere (FIRE), led the rally. He spoke of his family being forced to flee U.S.-backed fascist repression in Guatemala and how these same conditions are now being imposed on the people of Bolivia by the U.S.-CIA-backed military coup and dictatorship. Juan Gonzalez, representing the Council of Mayan Elders, reminded the crowd, “We are on Indigenous land and this entire hemisphere is stolen land.” 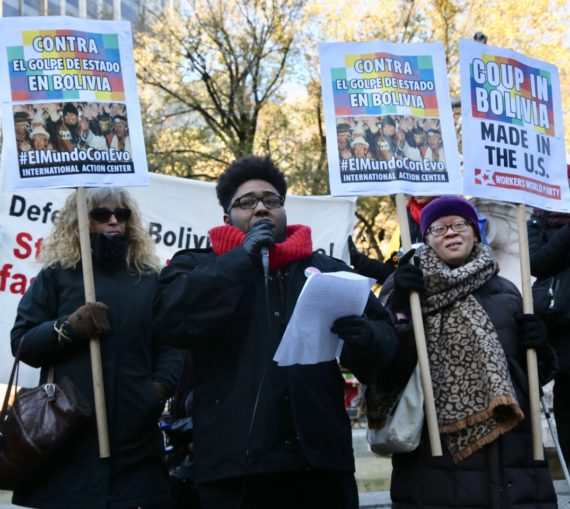 Chanting “USA-CIA, Hands off Bolivia!” demonstrators took to the streets for a spirited march to the John F. Kennedy Federal Building in Government Center, to draw attention to the U.S.-CIA’s criminal involvement in the military coup against Indigenous leader and socialist President Evo Morales.

On Nov. 11, around 75 Philadelphia activists came together for a protest against the coup. The action started with a rally at City Hall and ending with a march and an impromptu demonstration inside the 30th Street Amtrak  train station. The event was cosponsored by Party for Socialism and Liberation and Workers World Party. 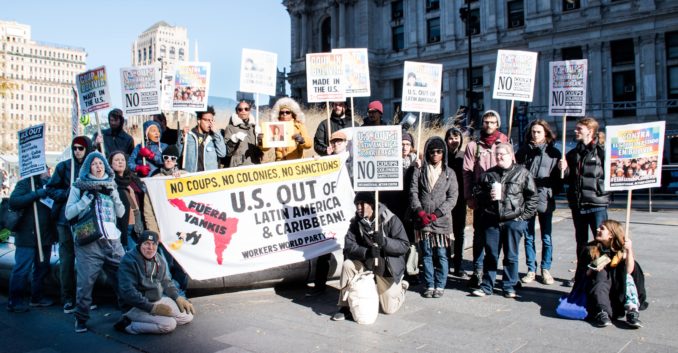 On Nov. 16, Philadelphia activists from Black Alliance for Peace, Philly Boricua Committee, MOVE, Coalición Fortaleza Latina, International Action Center, Workers World Party and Party for Socialism and Liberation joined for a solidarity rally titled “No coup in Bolivia! U.S. out of Latin America!”  This united demonstration at City Hall called out the long history of U.S. imperialism in the Americas, with speakers connecting the U.S. role in the genocide of Indigenous peoples, the colonization of Puerto Rico and the theft of parts of nothern Mexico, as well as the need for U.S. workers to see themselves as part of a global class.

Numerous passersby joined the demonstration as speakers connected the conditions for workers in Philadelphia, the poorest of the 10 largest cities in the U.S., to the struggles of workers in Bolivia, Haiti, Venezuela and beyond. The demonstrators also demanded that FMC, a major lithium mining corporation headquartered in Philadelphia, keep its hands off Bolivia’s natural resources. This action showed the potential for broader unified actions against U.S. wars, sanctions and coups.

In Durham, N.C. a crowd of 30 anti-imperialist demonstrators gathered downtown Nov. 13 to demand an end to the coup against President Evo Morales and an end to U.S. interference in Latin America. A simultaneous rally was held in Raleigh.

Over 100 people came out Nov. 11 in San Francisco to demand “Stop the U.S.-backed fascist coup in 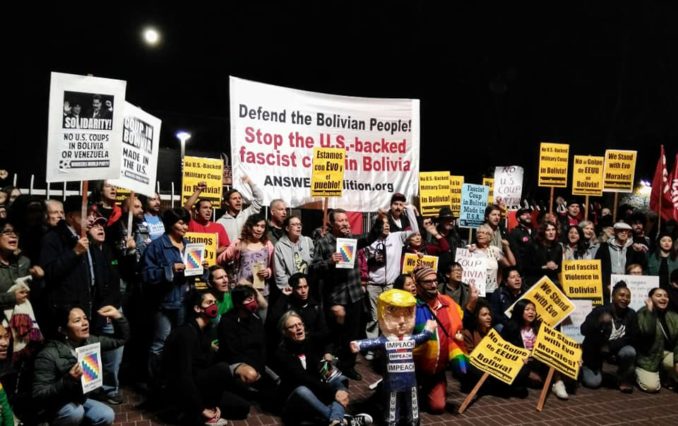 Bolivia.” The protest, which was organized by Answer attracted many organizations, activists and artists from across Latin America who denounced the coup and demanded that Bolivian President Evo Morales be returned. Organizations giving solidarity messages included the Task Force on the Americas, Coalition for Peace in Colombia and Workers World Party.

On Nov. 12, in Portland, Ore., around two dozen people gathered at Terry D. Schrunk Plaza to speak out against the recent coup in Bolivia. Holding signs opposing U.S. imperialism and the lies spread in corporate media, the demonstration attracted people finishing another rally that supported DACA (Deferred Action for Childhood Arrivals) recipients and 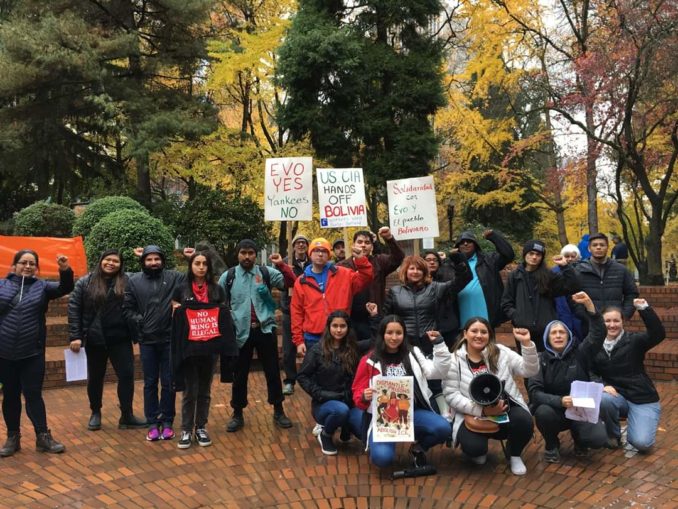 In Seattle a demonstration on Nov. 16 against the U.S.-engineered coup against the Morales-led government of Bolivia was held downtown.  The action, called by Answer, included at least five other participating organizations.