Mike Africa Jr. presented an engrossing, dynamic one-person narrative, “Born on the MOVE,” for almost two hours here at the Solidarity Center on Nov. 16.  He began this emotional, political journey by describing how his mother, Debbie Africa, gave birth to him by herself in secret on Sept. 15, 1978, while she was incarcerated.  Debbie Africa along with Mike Jr.’s father, Mike Sr., are members of the MOVE 9, falsely arrested and imprisoned in 1978 for the murder of a white Philadelphia police officer, who in reality was killed by friendly fire. 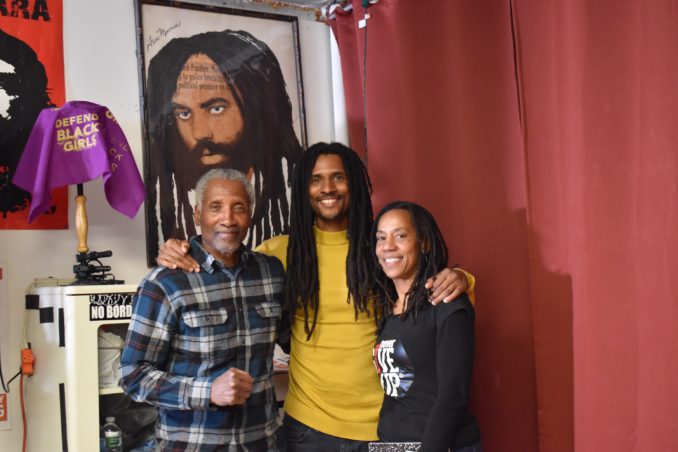 Debbie Africa, with the assistance of another MOVE 9 member, Janet, was able to keep Mike Jr.’s birth a secret before it was made public during a court hearing.  The baby was shown to all 63 inmates on the same cell block to confirm the baby’s birth and to safeguard his life.

MOVE drew the ire of the Philadelphia repressive state starting in 1977 — led by the late commissioner of police and mayor, Frank Rizzo, who militarized the police. On Aug. 9, 1978, the Philadelphia police and fire department attacked the MOVE house with machine gun fire, water cannons and more.  MOVE members were savagely beaten, including an eight-month pregnant Rhonda Africa, whose baby was delivered stillborn.

Mike Jr. provided some historical background on the majority Black communal group, which follows the teachings of John Africa. MOVE believes that all people, all animals and all nature should live in harmony and cooperation, void of oppression and exploitation. Mike Jr. named the Rev. Dr. Martin Luther King Jr., Malcolm X, Che Guevara, Fred Hampton and Jesus Christ as revolutionaries, assassinated for their radical beliefs.  He spoke of the reactionary system that only cares about “making money,” “locking people up” and “trying to stop revolution.”

Mike Jr. reiterated a number of times that the aim of the repressive state was to kill women, men, children and animals.

Mike Jr. also spoke of the horrific MOVE bombing that took place on May 13, 1985, when the Philadelphia police dropped an incendiary bomb by helicopter on the MOVE house, killing six adults and five children. The bombing ignited the burning of over 60 houses on Osage Avenue.

The adult survivor of the bombing was Ramona Africa, who was almost burned alive.  She was unjustly arrested and found guilty of “riot” and “arson” and spent seven years in prison.  No one was arrested or convicted for dropping the bomb.

Mike Jr. detailed the great joy that he felt when his mother and father were released from prison, four months apart, in 2018, after spending 40 years incarcerated.  Only two of the MOVE 9, Delbert Africa and Chuck Africa, are still in prison, awaiting parole. Merle Africa and Phil Africa died of cancer in prison.

Mike Jr. gave credit to Pam Africa, MOVE member and leader of the International Concerned Family and Friends of Mumia Abu-Jamal, for making him not feel ashamed of being born in prison.